Okay, because of our friend Sue's visit, I have a ton of photos — a ton more than I can post this month, probably. You may be seeing them all summer. Yesterday (Sunday) started as a rainy day, so we had no plans to go out in the car. Here are some more images from Chédigny, taken Saturday afternoon. 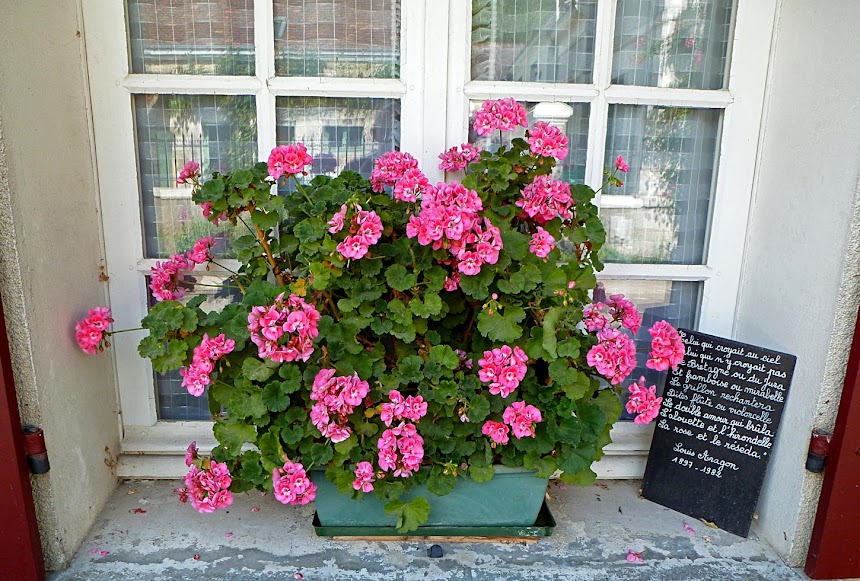 The rain ended around noontime yesterday, and it didn't really start up again until early evening. Sue spent part of the afternoon working in the yard, weeding. I'm not supposed to do that kind of work while the incision on my chest is still stitched up and healing. We all three watched the men's final at the French Open tennis tournament, called Roland-Garros after the name of the stadium. Nadal won — surprise! In the morning during the rain, and after the tennis was over, we looked at a lot of old and new photos on the television screen, copying them onto "thumb drives" that plug into the TV's USB port. 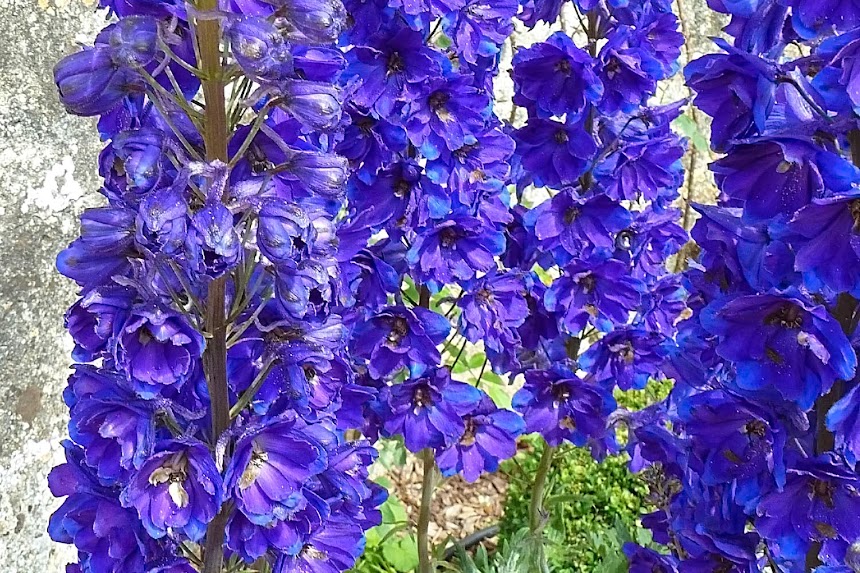 When I got up a few minutes ago — late, at 5:20 — and took Tasha outside to pee, it was just starting to rain again. Right now it's pouring — the rain is heavy enough, and the clouds thick enough, that our satellite dish just lost the TV signal and the screen went dark. I hate when that happens. Walt says he heard thunder and saw lightning during the night. I was fast asleep. 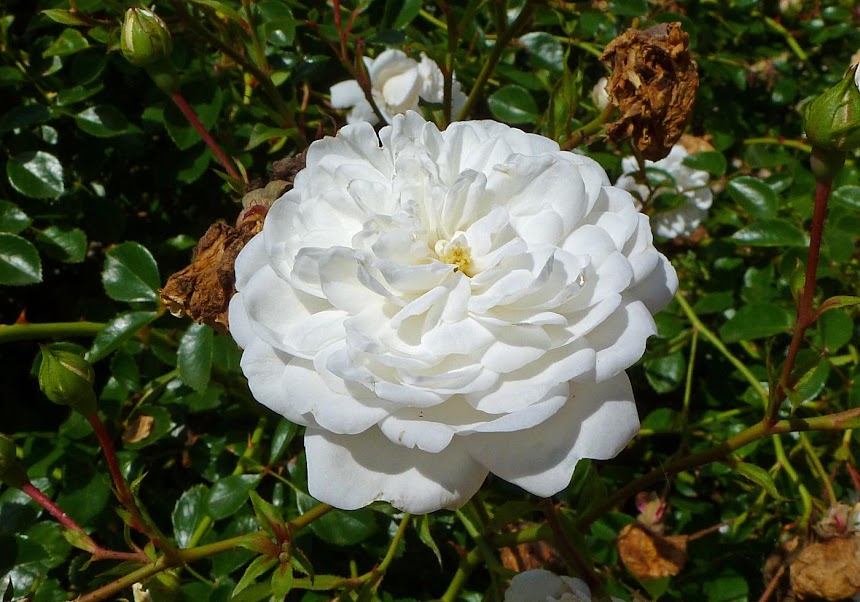 Since it's raining, and predicted to — maybe — rain all day, I think we'll go shopping in Blois this afternoon. There are two or three gigantic "hypermarket" stores (hypermarchés like Leclerc, Cora, Auchan) up there, and there are some things I want to look for — mostly things for the kitchen. And it's always good to spend some time in the big stores to see if I find items and foods that I can't find in our local Saint-Aignan supermarchés — imported products, for example. 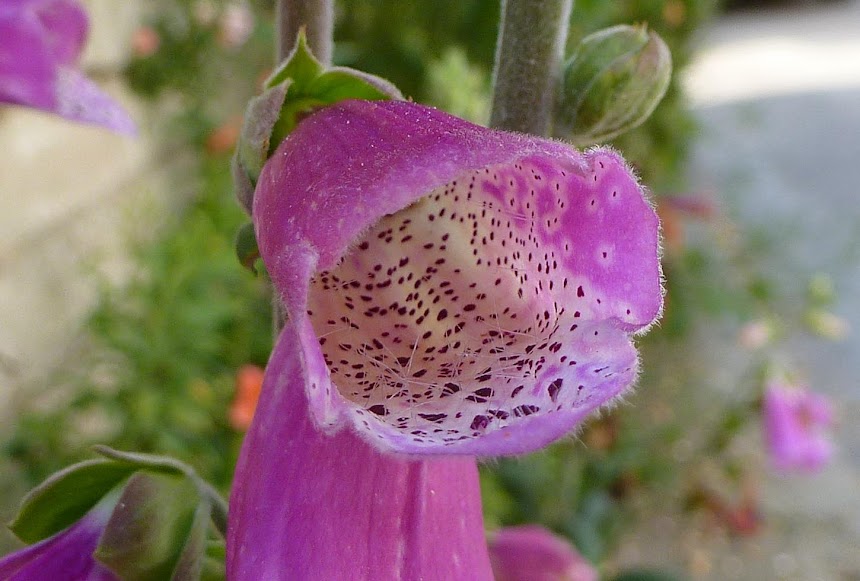 Speaking of imported goods, there's also a little hole-in-the-wall Asian/African grocery store where I can get things like good frozen shrimp, stir-fry sauces, and vegetables including okra. It's always worth stopping and shopping in there. And then there's the gigantic produce store called Grand Frais. That kind of shopping doesn't require sunny weather. Below is a screenshot of our current weather radar graphic. I hope all that rain in the far south doesn't move up this way. Saint-Aignan is where the red dot is. 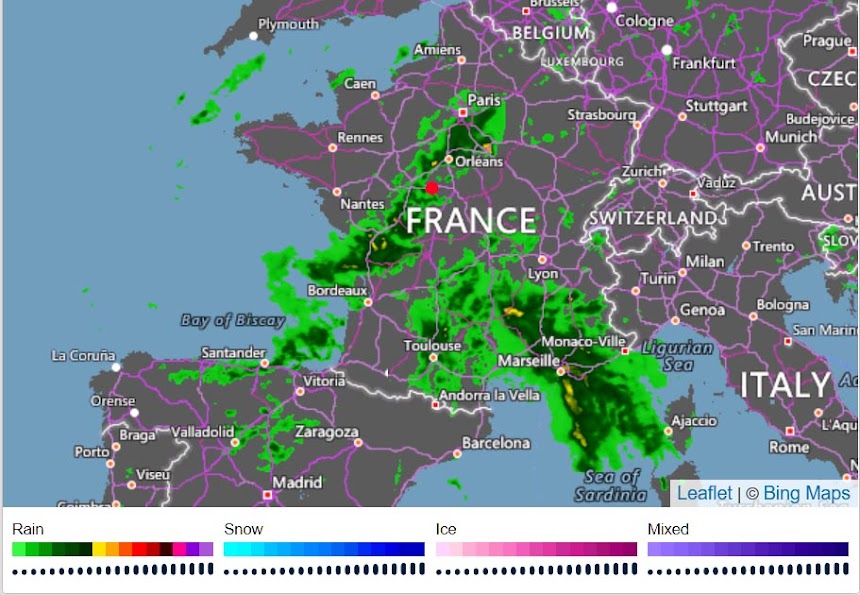 For lunch yesterday I made a dish called œuf cocotte (or œufs en cocotte) in French. In English it is called baked or "shirred" eggs. You put some cream in the bottom of a ramekin, add some cooked vegetables like mushrooms, onions, or eggplant, some raw tomato, or some little pieces of cooked bacon, ham, or chicken, and maybe some grated cheese. Then you drop in a raw egg, or two raw eggs if your ramekin is big enough, and pour a little more cream over it or them. Optionally, top the preparation with grated cheese. 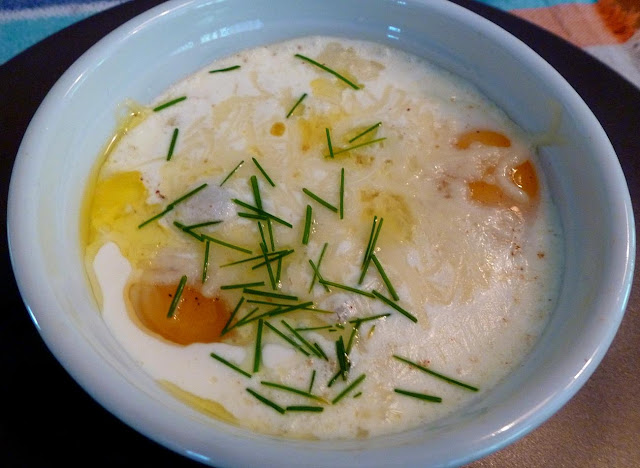 Bake the filled ramekins in a water bath at about 325ºF / 160ºC, or cook them in a steamer (un cuit-vapeur), for seven to ten minutes, depending on how done you prefer eggs to be cooked. The egg whites should be set and the yolks runny, in my opinion. Sprinkle on some chopped fresh herbs or chives. Eat warm with good bread and a green salad. Here are two recipes, one by Clotilde on Chocolate and Zucchini, and one on myrecipes.
Posted by Ken Broadhurst at 06:35