I got busy this morning and now it's really late. I had to hang out the laundry I did last night — the washing machine has a timer we set so that it runs at about 2 a.m., when electricity rates are lower. It was supposed to rain today, but so far the sun is shining. I guess putting laundry out on the line is tempting fate, but I did it anyway. 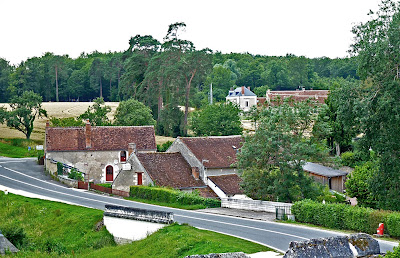 The farm buildings that house the Auberge du Château de Montpoupon,
seen from the courtyard/terrace of the château itself 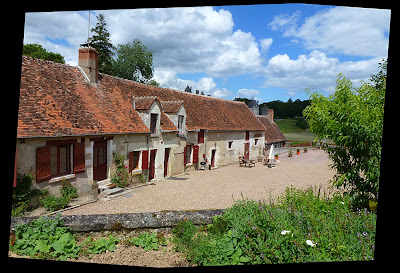 The farmhouse at Montpoupon where the restaurant is located
The other day (Sunday) at Montpoupon, I somehow got strange options set in my camera's labyrinth of menus (has that ever happened to you?), so I spent a couple of hours this morning trying to correct and improve some of the photos in Photoshop. I'm not sure I was very successful. I still have to figure out the camera's settings. Maybe I'll reset it to factory defaults and start over again. 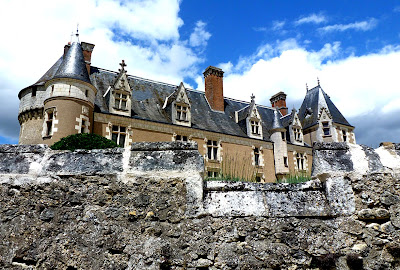 Montpoupon seen up close from the road below 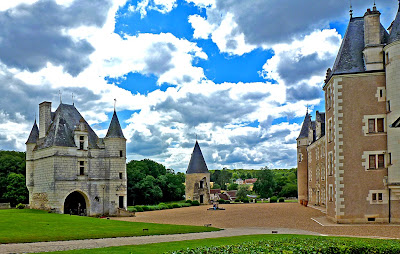 The courtyard/terrace of the château de Montpoupon, showing
(l. to r.) the Renaissance gatehouse, a medieval tower, and
the main building containing the living quarters
So... I really enjoyed visiting Montpoupon, and I took a lot of pictures — many of them bad. But I'm going to publish a few of the salvageable ones. There are four in this post. That's Walt sitting by the well in the middle of that last picture.
Posted by Ken Broadhurst at 09:15