Because of the weird weather, there's not much fruit on the trees this year. There were some cherries earlier, and the little pear tree in the yard has quite a few pears on it, but there are almost no apples, few plums, and no walnuts that I've seen.

On the other hand, because of the wet weather, aided by some well-timed weeding that Walt did in March, we have had a magnificent crop of rhubarb. If, like me, you grew up or live in a region with a warm climate, you might not be very familiar with the vegetable treated like a fruit that is rhubarb. It's a perennial that comes up from the roots (rhizomes) every spring, with thick reddish stems and large green leaves. 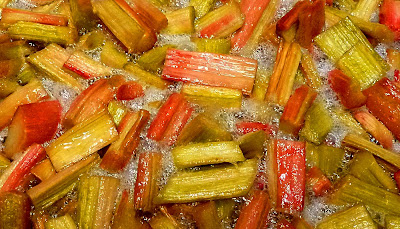 Rhubarb cooking into jam
Rhubarb likes to be watered abundantly. It also needs cold winter weather to thrive. We had those conditions this year, with a very hard three-week freeze in February, and then abundant rains from the beginning of April through most of July. 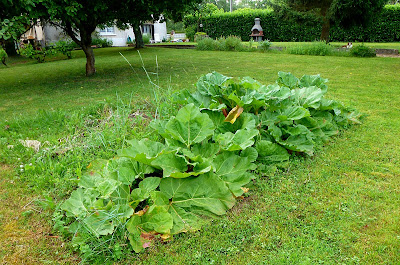 The rhubarb patch out in the garden
You eat only the thick, stringy stems of the rhubarb plant. The leaves are mildly toxic. You take the strings off the stems the way you do with celery. A friend told me that you can eat them raw, dipped in sugar. You can also cook them into pies, compote, or jam. Rhubarb is good combined with apples, strawberries, or other fruits. Or by itself. 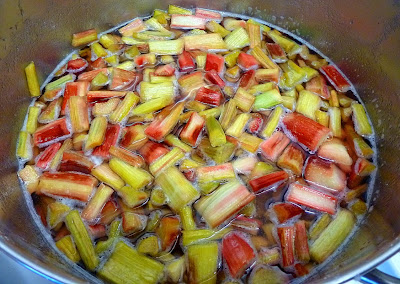 The rhubarb after it spent 18 hours in sugar, before cooking began
I made rhubarb jam yesterday. Walt harvested several kilos of stems, and after I trimmed them up I had three kilos to cook. I added three kilos of sugar — rhubarb has a tart taste so I used quite a bit to make it sweet. The chopped up rhubarb stems and the sugar, mixed together in a big stainless steel pot, macerated together overnight, until all the sugar had liquified. 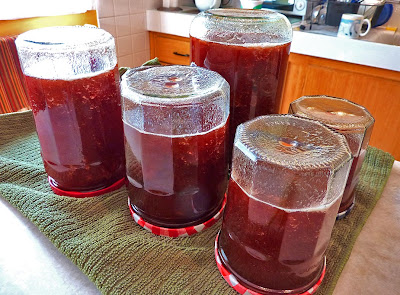 Jars of rhubarb jam cooling upside down
Then I put the pot on the stove and brought it up to the boil, adding the juice of a lemon and two teaspoonfuls of vanilla extract. After fifteen minutes, the rhubarb stems were cooked, I could tell. And that's when things got sticky. I decided to strain the rhubarb out of the sugar syrup and run it through a food mill to remove any remaining fibrous strings from the mixture.

It worked, but it took a while, turning the food mill's crank and slowly pureeing the heavy, sticky rhubarb stems into a smooth pulp. When I had done as much as I could manage, I put the pulp back into the syrup, which was bubbling away on the stove. I let it cook until the temperature reached 105ºC (220ºF) and then put the jammy jelly up in sterilized jars. 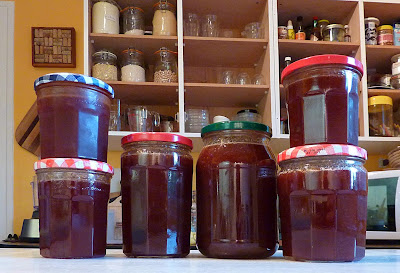 I ended up with six jars of jam, of various sizes.
That should keep us for a year or more.
I haven't really tasted it yet, except little dabs while I was cooking. In a few minutes, after I walk the dog, I'm going to make some good tartines of toasted bread, butter, and rhubarb jam. I'll report back. 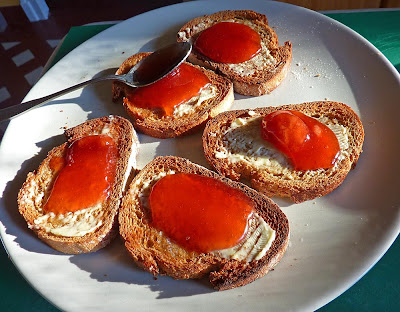