The word blaireau [bleh-'roh] has a couple of meanings in French. The first one I knew, I think, was "shaving brush" — the stubby little brush you use to lather up a piece of soap in a bowl and then lather up your face before shaving. I used to shave that way when I living in Paris as a young man. Barbers use them, or used to.

The second meaning of blaireau is the real one. Un blaireau is the animal we call a badger in English. Different badger species live in Europe, Asia, Africa, and North America. They're related to weasels and ferrets. The European badger is a lot bigger — heavier — than the American variety, weighing as much as 20 kilograms or close to 50 pounds (Callie weighs a little less than that). European badgers are omnivorous, not exclusively carnivorous. And they are nocturnal or crespuscular — we don't see them very often. 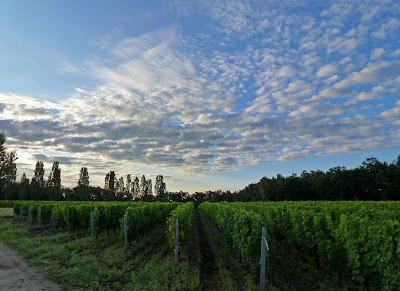 July vineyard view
I've seen a blaireau out in and vineyard several times, early in the morning. The first time I saw one run across the road and down a row of vines, my initial thought was that it was a big cat. But it was just too big, and it ran along on its short legs with its tail sticking straight out behind it. Later, a neighbor told me that she frequently ses a big badger along the paved road that runs down the hill toward the river when she leaves home early in the morning to drive to work. Marguerites — daisies — in the back yard
I haven't been able to take any pictures of badgers.

Yesterday, we realized that we have a badger, or maybe more than one, prowling around in our yard at night. Badgers are powerful diggers — they are burrowers — so a wire fence like ours will not keep them out of the yard. We haven't seen the trespassing badger or badgers, but yesterday we saw clear evidence of their presence. 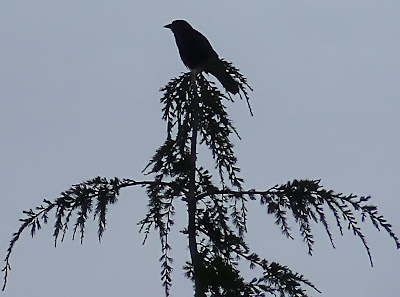 A bird in the top of a tall evergreen tree in the yard
I went out to start digging up another tree stump, and Walt was out getting the lawn mower ready for the day's work. I noticed a fairly big hole in the ground near the garden shed. It was about 20 cm (8 inches) across and just as deep. I asked Walt if he had dug out a plant of some kind there. He hadn't. We examined the hole and realized it was a wasps' nest that had been uncovered by an animal. The only animal we could think of that would be capable of digging such a hole overnight in our hard, rocky ground was a badger. 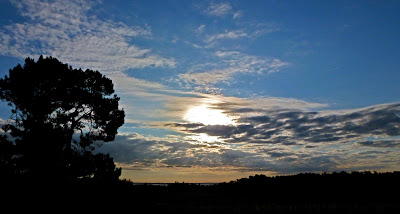 Early morning in July
A week or two ago, Walt told me he had seen a little pile of dung full of cherry or plum pits on the ground near the vegetable garden plots. We often see those out on the gravel and paved roads around the vineyard, and I always thought they were deer droppings. We don't think deer can jump over our fence or the back gate, but maybe they can. 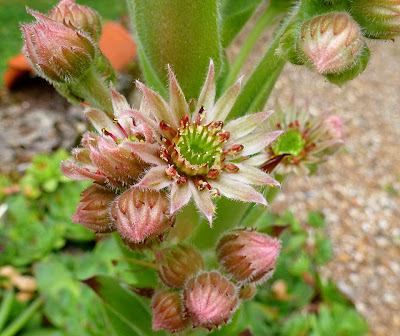 The house leek flowers have finally started opening up.
Anyway, now I'm thinking that the pit-studded droppings are actually being left by badgers, which eat fruit and roots as well as insects, rodents, frogs, snakes, and earthworms. And they are known to dig up underground wasps' and bumblebees' nests and feed on the contents.

Looking out across the river valley
The word blaireau derives from an old French word bler, meaning spotted, speckled, flecked, grizzled — referring to its coat's different colored markings, in other words. The female blaireau is the blairelle, and the little ones are blaireautins. The European badger is a social animal, living in groups numbering as many as two dozen individuals.
Posted by Ken Broadhurst at 08:15