Not to mention taking pictures. Yesterday I posted pictures of cooking. Today, it'll be pictures of walking and looking. I get to do some of that every day, walking with the dog in the vineyard. 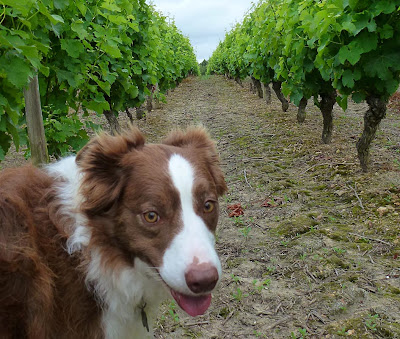 I think Callie likes this weather and this life.
This week we have an appointment to go taste and buy wines from our neighbors Patricia and Bruno at the Domaine de la Renaudie. We live in a wine village, and while some local vintners (vignerons) have quit the business over the past seven or eight years, many have continued and a few new ones have planted or acquired vines and starting making and selling wines. 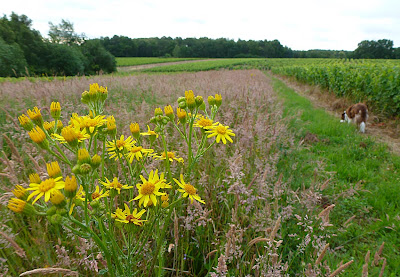 Having the vineyard out back is like having our own private park for our walks. Sometimes I wonder how long we'll keep living here — I've never lived longer in the same house, except when I was growing up — and then I think about the dog and our walks. Where else would be have a long gravel road, hundreds of walkable rows between lines of vines, and no traffic so need for a leash? 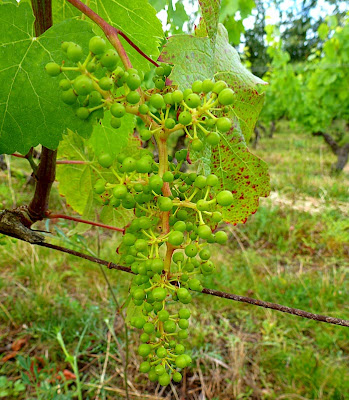 Grapes at La Renaudière in early July 2012
Sometimes I dream of living in a city again, but then I wake up and smell the coffee (it's pur arabica). 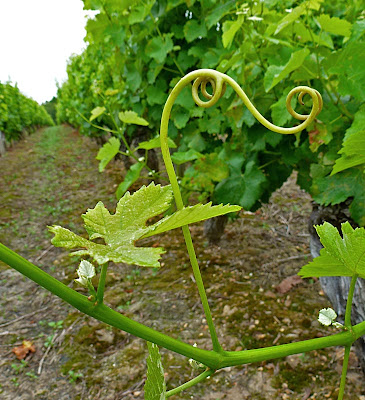 Tendrils reaching for something to hold onto
As you can see from the pictures, the grapes are developing despite the mediocre 2012 weather. A report on the news this morning featured tourists down on the Mediterranean coast — Provence, Côte d'Azur — thumbing their noses at their compatriots who live in the chilly, damp northern parts of France. That would be us. 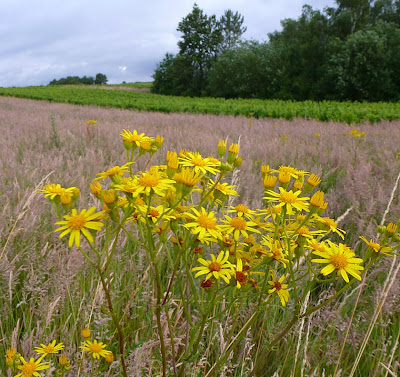 Oh well. It's like living in San Francisco, where you watch reports of heat waves, heat stroke, and violent thunderstorms on the TV news and feel like you live in an alternate universe. I don't envy those in eastern parts of the U.S. who've had to endure temperatures in the upper 30s and lower 40s centigrade for a past few weeks. We have just barely hit 30ºC maybe once this year. Mostly, it's been in the low 20s and high teens. That's the 60s and low 70s F.
Posted by Ken Broadhurst at 08:00