Have you ever lived in a house that was heated by steam (or hot water) running through old cast-iron radiators? It's a good kind of heat — I like it better than the forced-air heating systems we had in houses and apartments in California.

Like everything else, the old radiators need periodic maintenance. In our house, which has 9 or 10 of the things in it, they especially need paint right now. Over the past nine years, I've painted two of them. In both cases — one in the kitchen, the other in the W.C. — I've unscrewed the pipes, taken the radiators off the wall, and laid them down on the floor to do the job of washing, scraping, priming, and painting them. 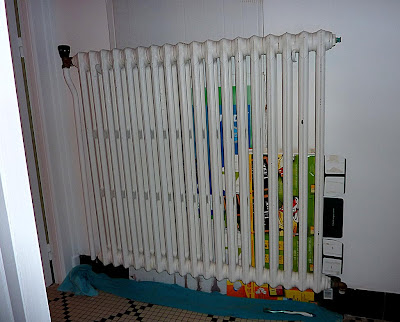 I put pieces of cardboard behind the radiator to protect the wall
while I was spraying and washing the thing.
The main problem with that is that the bigger radiators weigh a ton. Walt and I can't even lift some of them. I've tried to rent some kind of dolly, jack, cart, or other apparatus we could use to lift them up off their mounting brackets and move them away from the wall, but with no luck.

Besides, before you can unscrew the pipes and take down a radiator, you have to empty the whole heating system of water. That means hooking a garden hose up to the boiler down in the utility room and letting all the water run out of the tank and all the radiators either into the yard or into the sewer. It takes an hour or two for it all to drain out. I don't know how much water the system holds, but I do know that you have to refill the boiler before you can use the heat again. Then you have to go around the house and bleed all the radiators. It's a lot of trouble. 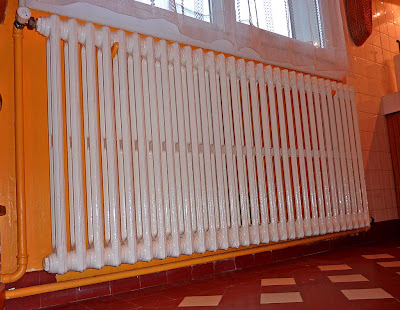 We repainted the kitchen radiator a few years ago by taking it down
off the wall. The wall behind it needed repainting as well.
So now, since we are suffering from cabin fever, what with all the rain all the time, I've decided to start working on a "test" radiator to see if I can actually repaint it in place. Yesterday I worked on cleaning one in the hallway that's easy to get to — spraying it with water and then a solution of bleach and soap, and finally spraying it again with water to rinse it off. I used a rag and an old toothbrush as needed to remove all the dust and dirt that had accumulated on the radiator ribs and pipes.

Now I have to paint it. I can't decide whether spray-painting it or painting it with a brush would be better. I guess I'll try the brush first. I'm hoping the radiator won't look worse when I finish than it did before I started. Any ideas?
Posted by Ken Broadhurst at 07:49