Besides the nice restaurant, one of the best things that's happened at the Château de Montpoupon is the end of the guided tour. The last time we visited — admittedly, it was nine years ago — we had to stand around for too long, pressed up too close to other tourists, to listen to a guide go through a memorized spiel. 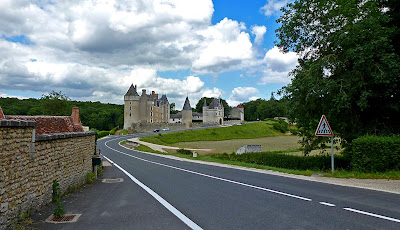 Driving north from Loches, you can be surprised by this view
of Montpoupon as you round a bend in the highway.
This time, we could wander freely around the château and grounds. There was recorded audio commentary in each room of the main building, and it started up when you walked in, thanks to some kind of motion detector. But you could listen or not, and there was nothing to stop you from ignoring it and taking a look at the things you were especially interested in. You didn't have to be part of a herd. 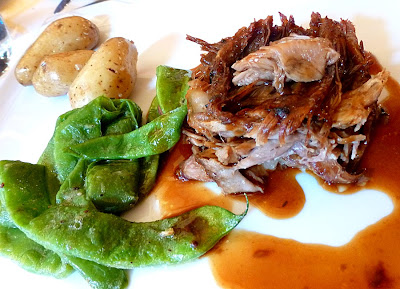 At the restaurant, three of us had this épaule d'agneau confite —
"pulled" slow-cooked lamb shoulder — with potatoes and
wide "Romano" green beans as our main course.
As I've said, the restaurant was very good — probably as good as the Rendez-Vous des Gourmets in Bracieux, where we had lunch with CHM a few weeks ago. It would be worth it to pay the 63-euro price of the chef's tasting menu and spend the afternoon enjoying a long series of small plates. If you had fasted for a day or two beforehand, that is. 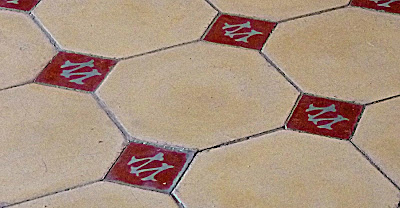 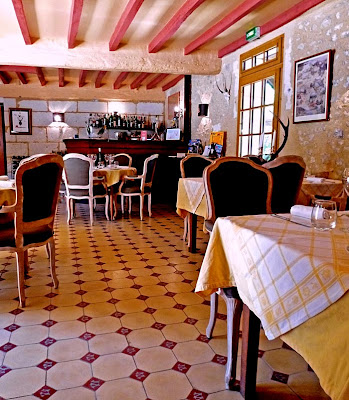 Views inside the restaurant, with the Montpoupon logo
as a motif in the floor tiles
The name Montpoupon apparently derives from the old name Mons Poppo — as the title of this post indicates. Mons is "mound" or "mount" (it's all relative) and Poppo was the name of the family who occupied a high bit of ground back here in the early middle ages. 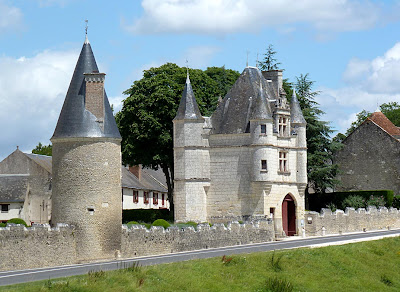 The Renaissance-style gatehouse at Montpoupon
was added on in the 1500s.
The hill was fortified, the name evolved, and one fort or château after another was built on the site. The current complex includes towers and buildings from several different periods, from the 13th to the 17th century. The main building, called the corps de logis, dates back to the 1400s.
Posted by Ken Broadhurst at 07:05