Winemaker says it's a "bad year"

Nearly everything is green now, except the wheat. It's ready to be harvested, I'd say. 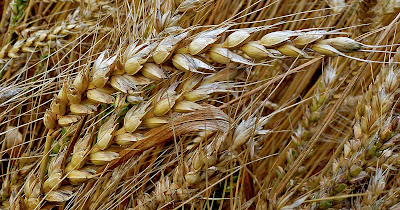 We had a very informative and delicious wine-tasting and talk with Patricia down at the Domaine de la Renaudie late yesterday afternoon. We all wanted to buy some of every one of the 10 or 12 different white, rosé, red, and sparkling wines they make. 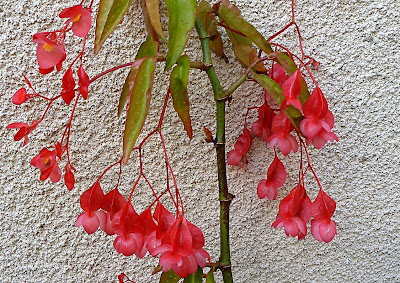 In April, I put this plant outside, on the north side of the house,
thinking it was pretty much dead. It has obviously
enjoyed the recent cool, wet weather.
Patricia said that 2012 has been one of the worst years on record for their vineyards. The year started out mild in January — so mild through December and January that the sap had not descended into the roots of many trees and vines. When the sudden cold snap hit in early February, plants and trees froze and many died. 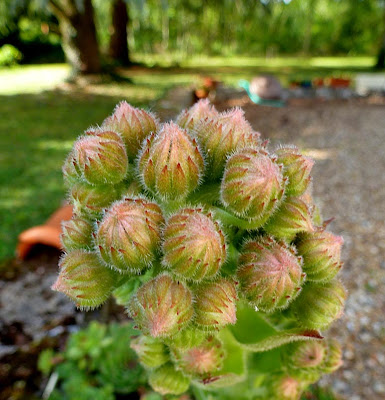 I'm still waiting for these house leek flowers to pop open.
Then, after a few sunny days in March, the weather turned cold and damp in April. The grape flowers didn't develop as they should, and the grape crop will be very small this year. On top of it all, the deer population exploded and they caused considerable damage to the vines. Now the summer continues to be damp — thus the small crop Patricia is predicting.
Posted by Ken Broadhurst at 08:57