One of the signs of the advancing season is the lowering of the electric fences around parts of the Renaudière vineyard. The fences are designed to keep deer out of the vines during the spring, when tender new leaves and shoots would tempt them to come do some munching. 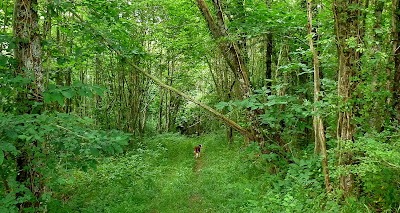 Callie checking to see if I'm following along or not
Callie loves the walk down through the woods — en sous-bois, in French, the "under-woods," which means among the trees and through the undergrowth. It's a nice change from walks up and down rows of vines, or along the gravel road, or even along the edges of the vineyard where the woods start. 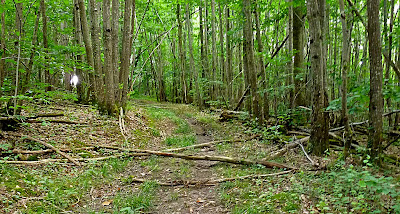 Looking back up the hill toward daylight
It's a good walk for me too, because the slope makes climbing back up toward the house a good aerobic workout after the easy walk down. Despite all the rain these past few months, the ground isn't very muddy down there at the bottom of the trail through the woods. Maybe it's because the trees and undergrowth are sucking up a lot of water in this season. 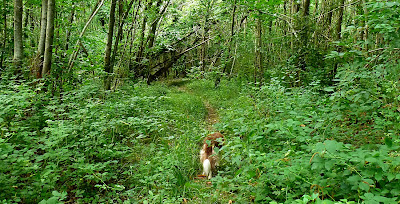 Callie making her way through the undergrowth
Speaking of water and the season, there are more of those big orange slugs crawling around all over the place than I've ever seen in my nine years of walking the paths and trails of the area. I saw at least 20 a couple of mornings ago, and yesterday afternoon I saw several too. In past years, they were a rarity, appearing only randomly from time to time. Now it's like an invasion.

The view toward the village as we emerge from the woods
Walt came downstairs this morning, looked out at the windy gray weather, and said: "Another fine October morning!" Trouble is, it's mid-July. We won't be sitting out on the deck this evening with Jean and Nick — it'll be too damp and cold. Things are only supposed to get worse, with showers today and tomorrow, and then heavy rains all day Friday. 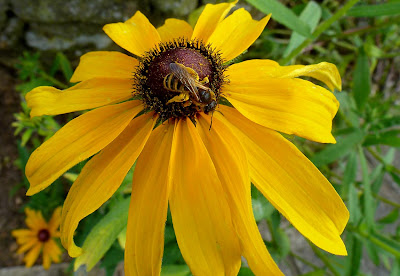 A bee in the back yard
I went to the pharmacy yesterday and the woman behind the counter asked me how things were going. I said fine, except for the weather. She looked at me and replied: « Ce temps-là me convient très bien, parce qu'il ne fait pas trop chaud. » — "This weather suits me just fine, because it's not too hot."