Tarragon chicken would be the English name for this way of cooking poultry. I thought of it because a few weeks ago I bought a pot of tarragon at the plant nursery in Saint-Aignan. It stayed in the little black nursery pot until a few days ago, when I transplanted it into a much bigger container. I hope it will prosper there. 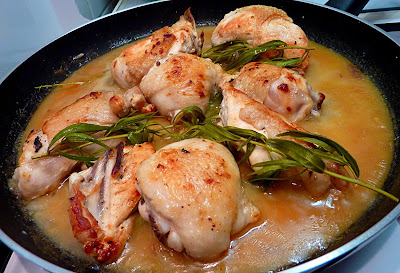 Poulet à l'estragon, a classic French recipe
I can actually remember the first time I ever ate poulet à l'estragon. It was in France, of course — in Rouen, in 1973, in an apartment on the rue du Gros Horloge, one of the city's most famous and picturesque streets. I was working as a teaching assistant in a lycée (secondary school) there that year. A French couple that I and a couple of other American teaching assistants had met served it one evening when they invited us over for dinner. They were planning to go live in New York the next year, so they wanted to practice their English and get to know some Americans. 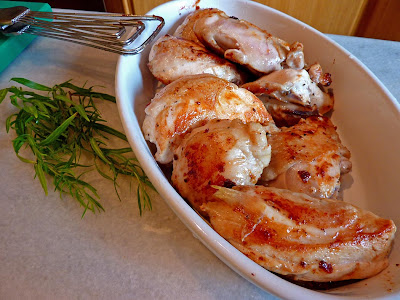 Tarragon and browned chicken pieces
That chicken was a roasted bird that had been stuffed full of fresh tarragon sprigs before going into the oven. It was served cold or at room temperature on a buffet table, with some salads and bread. Tarragon was a flavor I wasn't really familiar with, and buying such a chicken from a shop in Rouen would have been far beyond the limits of my budget as a part-time TA. In other words, the tarragon chicken was a discovery and a real treat. Thus the memory, all these years later.

Over the past few years, Walt has made tarragon chicken several times. The version he has made is in a cookbook from the Hudson Valley region in New York. It's a good recipe using a cut-up chicken, tarragon, and creme — a kind of sauté or fricassée. That's what I wanted to make this time, with sprigs from my tarragon plant, but I wanted to use a French recipe. As usual, I didn't use just one recipe but I read two or three in my favorite books and then did my own version. 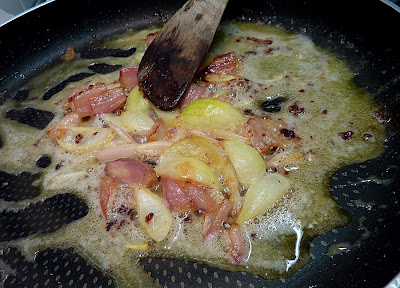 Take the chicken out of the pan and let the onions
and shallots cook down in the butter and fat...
The Larousse Gastronomique food and cooking encyclopedia gives a recipe for poulet sauté à l'estragon that it says is just one version of a sautéed chicken using various fresh herbs or a combination of herbs (poulet sauté aux fines herbes). As is often the case with that book, you have to read back three or four pages to get to the "master" recipe that explains the basic technique for sautéing a chicken and then read forward to find the recipe for the fines herbes chicken, which comes alphabetically after the estragon one. 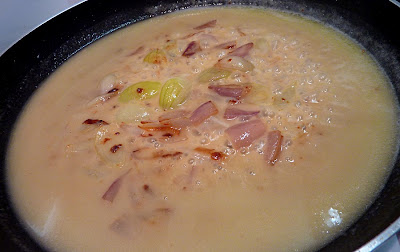 ...before adding a teaspoon of flour and then some chicken stock,
white wine, and a squirt of white wine vinegar or lemon juice
So I spent a few hours reading about chickens and tarragon, including dipping into Ginette Mathiot's Je Sais Cuisiner, a home cooking classic in France, as well as Monique Maine's Cuisine Pour Toute L'Année, another standard French kitchen resource. It was good entertainment — the literary equivalent of going to one of the local open-air markets in the morning before lunch. You end up really hungry for something good to eat after you've read about or seen all the delicious-looking foods and dishes you might decide to indulge in. 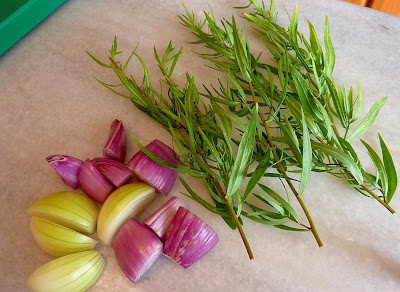 Onion, shallot, and tarragon go into the sauce.
As usual, Mathiot's and Maine's recipes are much simpler than the LG's. Mathiot's is not so simple though, calling for stuffing a whole chicken with ground pork and veal along with the tarragon and then cooking the whole bird either in the oven or in a big pot on top of the stove. Maine's is the simplest, resembling the Hudson Valley book's version in many ways, but with fewer ingredients. American recipes often have very long ingredient lists compared to French recipes. (Walt had always simplified the Hudson Valley recipe when he made it.) 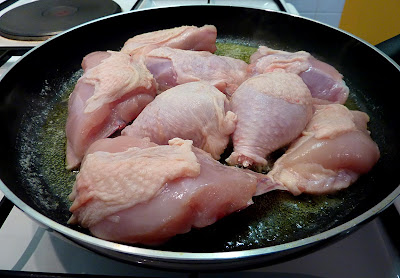 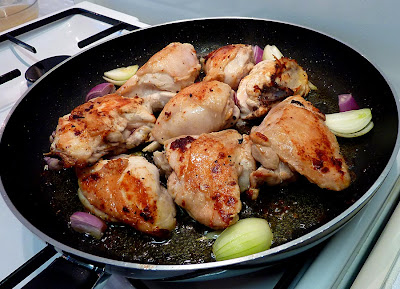 Poulet sauté à brun avec oignons et échalottes
The problem with the LG (for me) is that many of its recipes include ingredients that most people would never have at home. One, for example, is fond de veau — reduced veal stock — which goes into the poulet à l'estragon, along with white wine, to make up the cooking liquid and sauce. You can buy fond de veau powder in a can, and I actually have some in the kitchen, but it's mostly salt, flour, cornstarch, potato starch, flavorings, colorings, and preservatives, along with 1.5% of something called extrait de viande de bœuf. Somehow, all that is not really appetizing. 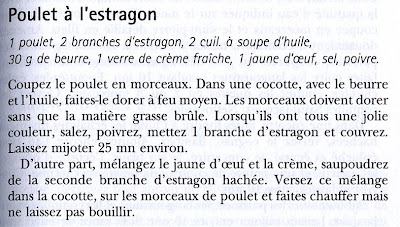 Monique Maine's recipe, above, says to brown the cut-up chicken in a mixture of oil and butter on medium low heat so that the butter and chicken juices don't burn in the pan. Then she makes a cream sauce. That sounded like a good idea to me. The LG says you can just slightly thicken the sauce with some flour, making a home-cooking style dish if you don't have any veal stock on hand. So I took that advice too.

Maine's recipe, as you see, says to brown the chicken and then use cream int he sauce, which contradicts the LG on the point of sautéing à blanc rather that à brun, but that didn't bother me. But Maine's use of an egg yolk to thicken the cream sauce doesn't appeal to me — egg yolk is added cholesterol, and you have to be very careful that the sauce doesn't boil (« faites chauffer mais ne laissez pas bouillir ») so that egg yolk doesn't curdle. It's too much trouble. 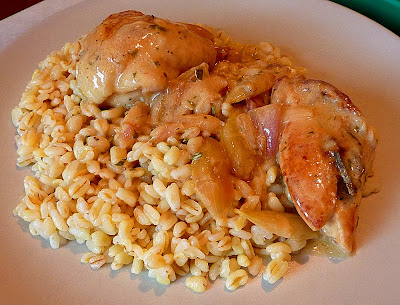 If I had been serving this to company, I would have saved out
a tarragon leaf or two to put on top for color.
I put in more tarragon that any of the recipes called for, because I wanted a highly flavored chicken. Some of the tarragon sprigs went right into the pan after the chicken was browned, and then I stripped the leaves off the other sprigs, chopped them, and added them to the cream that I poured in at the end of the cooking. Those chopped fresh leaves cooked only briefly and enhanced the flavor. 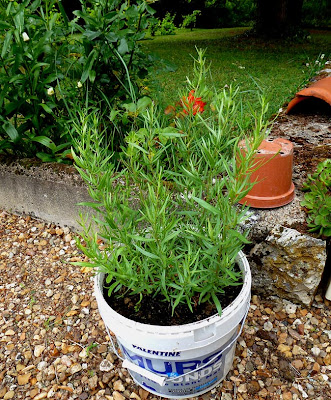 Estragon
The other flavoring ingredients in the sauce were a small onion and a large shallot, some salt and pepper of course, a bay leaf, and a dash of tarragon vinegar (vinaigre à l'estragon) along with the white wine and chicken stock (which I made with the carcass of the bird after I cut it up) that were the cooking liquids. The chicken shouldn't boil in the sauce, according to the LG. After it's browned, add liquid let it simmer for half an hour on very low heat. Take the chicken out of the pan and boil the sauce down at the end to thicken it if you need or want to, and then pour it over the chicken pieces.

We cooked wheat berries instead of rice as an accompaniment to the chicken and sauce. You could have potatoes or quinoa or millet or wild rice or pasta. Then a salad. It's lunch.
For more precise quantities and instructions, here's a recipe from epicurious.com, and here's another from the BBC (James Martin's).