In French a "nut" is a walnut, and the word is noix, pronounced [NWAH]. It's a feminine noun, so you say la noix or une noix. The town across the river from Saint-Aignan is called Noyers [nwah-YAY], which means "walnut trees".

There aren't any walnuts on the tree out in the vineyard where we usually see them at this time of year. In autumn, Callie loves to find them on the ground, crack them open in her mouth, spit out the shells, and eat the nut meat. She'll be disappointed this year. Blame weird weather for the barren nut tree this summer. 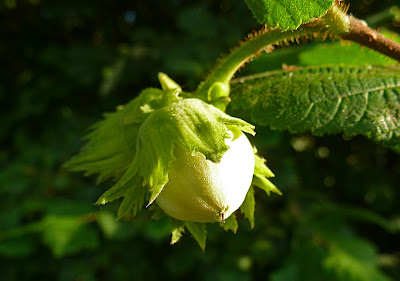 An immature hazelnut or noisette
There are, however, not many dozens of steps away, some trees/bushes that are covered in "little nuts" ("nutlets"?) or noisettes [nwah-ZEHT], which we call hazelnuts in the U.S., or filberts. In England, they can be called "cobnuts" — but I didn't know that term until I read it a minute ago. In France, the tree — or is it a shrub? — is called a noisetier [nwahz-TYAY] — two syllables — and it's a masculine word like noyer.

The noisetier can also be called a coudrier [koo-dree-AY], and a grove of hazelnut trees is called a coudraie [koo-DRAY], feminine, in France. La Coudraie is the name of a little hamlet in our village, about a kilometer from our own hamlet, and it's a place name that you see frequently around here. Worldwide, the biggest producer of hazelnuts is Turkey (75% of the world's crop). In North America, Oregon, Washington, and British Columbia are big hazelnut producers.
Posted by Ken Broadhurst at 07:55