A week or so ago, I bought a shrink-wrapped package of smoked salmon at the supermarket. Yesterday, I realized we really ought to eat it. But how? Walt said he could make bagels, but that really takes a significant amount of time and effort.

The salmon I had was the cold-smoked kind — basically cured raw salmon. With some hot-smoked salmon we made a month of two ago, we had put together — improvised — a pasta dish with cream that was pretty good. This time, I went looking for a recipe.

Here I am hungry before dawn just looking at these photos...
The first recipe that popped up when I searched on Google was one by Elise, who has many great recipes and food ideas on a site called Simply Recipes. Here's a link to it and to the recipe I followed. I highly recommend it. You can't go wrong with Elise's recipes.

I had some big Spirolini pasta I wanted to use, but any pasta would be good. Otherwise, I modified the recipe only slightly. For example, I used lime zest and juice instead of lemon, because I happened to have a lime in the refrigerator. I think the lime flavor was really good with the fish. And I used just shallots (two medium) instead of shallots and garlic. Onion (one medium) would be fine too. And I put in more salmon and pine nuts (pignons de pin) than Elise's recipe called for, making the dish richer. Oh, and I added a couple of fresh cut-up tomatoes at the end too. 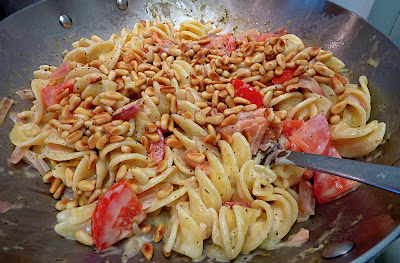 The smoked salmon cooked just slightly in the hot pasta
and cream — it was succulent, as we say in France.
Yesterday it rained all morning, and even in the afternoon it was too wet to do much outside. Early in the day, I went and got a haircut (merci, Madame Barbier), drove to a Monsieur Bricolage store over near Montrichard to get some special paint for radiators that I had read about, and then came home and cooked. You see the result. I went to bed early last night so here I am blogging (vacation? what vacation?) at five in the morning.
Posted by Ken Broadhurst at 05:30