Can you dig it?

Dig it out, I mean. I didn't know if, at age 63, I could do it. Well, I could, and I did. Walt helped by getting out the ax at the critical moment and severing the last thick root that was holding the stump in the ground. Then we were finally able to pick it up and move it.

Before moving to France, the last time I had done physical work — hard labor — was in 1971, when I was 22 years old and had just graduated from college — university, they say outside the U.S.A. I spent that summer of 1971 working for the Pickard Roofing Company in Durham, North Carolina. (I'm leaving out all the times we moved all our belongings from apartment to apartment, house to house, city to city over the years.) 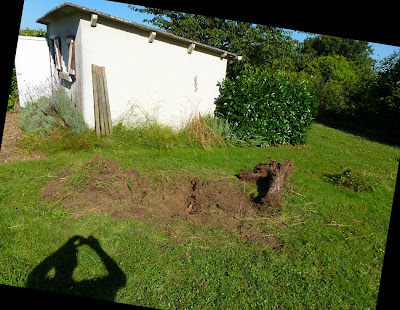 Me in silhouette taking a picture of the stump I dug out yesterday.
My first assignment at Pickard was helping a crew of professional roofers — couvreurs, or "coverers" in French — put a new tar paper and hot tar roof on a tobacco warehouse. It was hell on high, meaning two or three stories up during a torrid North Carolina summer. I remember hauling big heavy rolls of tar paper on my shoulder up a long tall ladder. 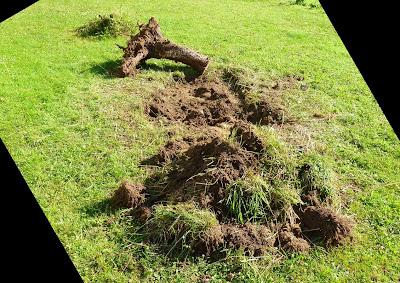 Digging, cutting, lifting, and pulling
Temperatures on the roof must have approached 45ºC, or 110ºF. At the end of the day, my clothes and shoes were spotted with sticky black tar, which we melted in big ovens while up on the roof and mopped onto the tar-paper-covered surface. A Durham tobacco warehouse can cover thousands of square feet — a full city block, in U.S. terms. The job took six weeks to complete. 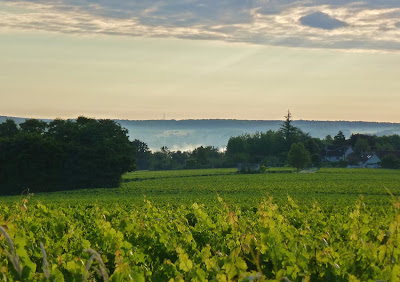 Our house on the edge of the vineyard, with fog
down in the river valley below
So 32 years later, in 2003, I retired (or just quit work) and Walt and I moved to France. Ever since — nine years now — I've been working like a dog. Sweating. Aching. Recovering. It's either sanding or painting, stripping off wallpaper, tilling up garden plots, cutting back blackberry brambles, pruning tree limbs, raking up leaves, or hauling wheelbarrow loads of junk or debris from one place to another.

And now it's digging out tree stumps. Two plum trees (R.I.P.) in the back yard blew over in a big wind storm two or three years ago. Only now are we finally digging out the stumps. Doing it turned out to be easier than I feared. The plan is to plant a cherry tree where the two old plum trees once stood.

I hope the exercise (or work) doesn't kill me. Time will tell.
Posted by Ken Broadhurst at 08:00