I have to keep reminding myself that it's not even August yet. With any luck, we've got at least two months of good weather ahead of us. The eggplant flowers will turn into eggplants, the green peppers will turn red, and we'll bring in a good crop of potatoes. We might even get green beans one day soon. 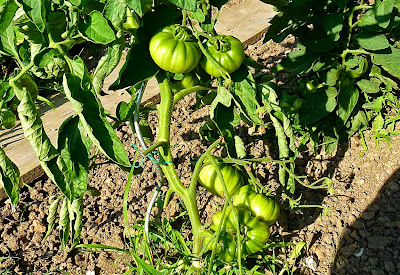 Waiting for tomatoes to ripen
Yesterday afternoon I went out to check on my blackberries and found that some animal had eaten them all! There weren't that many of them — maybe enough to make one pie — so I'm not too disappointed. The vines are growing strong and that's the important thing for the future. I'd been tasting them nearly every day and was waiting for them to sweeten up a little before I picked them. Somebody beat me to it, and I hope it was an animal and not a person. 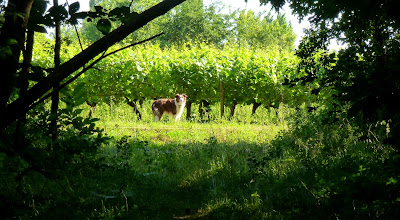 Callie and I walked in the woods, where it wasn't
quite as hot as it was out in the sun 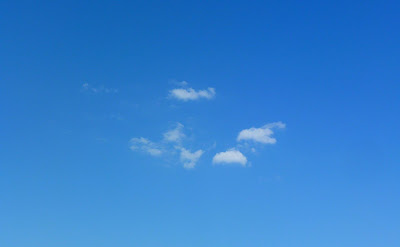 Summer skies
Lunch yesterday was sardines out of a tin, cold boiled potatoes, coleslaw, and home-made mayonnaise. It was really too hot to cook much else. We don't have air-conditioning in the house, and we don't get enough truly hot weather to justify having it put in. Besides, I hate air-conditioning, if you want to know the truth. We didn't have it in San Francisco, either, because we didn't need it there. The last time I lived in an air-conditioned house was in Washington DC in the mid-1980s. 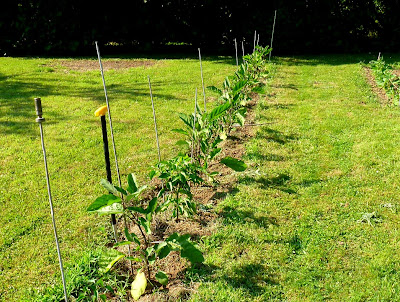 Weeded
We did a lot of weeding yesterday morning, before the sun had had time to heat things up too much. We weeded in anticipation of rain today and over the next few days, when temperatures are supposed to fall back to "normal" levels, or even below normal. We'll have highs in the 70s F instead of the high 80s and low 90s. That'll be nice, but I hope we have some more hot weather before the season ends in October.
Posted by Ken Broadhurst at 07:45