Lunch at the Château de Montpoupon

Let me start with the lunch, since that's where we started. First, we were the restaurant's only customers. One table of four, set amid the other 20 or so tables — empty — in the room. One good thing about having the place to ourselves: the service was excellent — attentive, efficient, and friendly. One of the servers was a young Lithuanian woman who spoke better English than French. The other woman spoke French, but I'm not sure it was her native language. 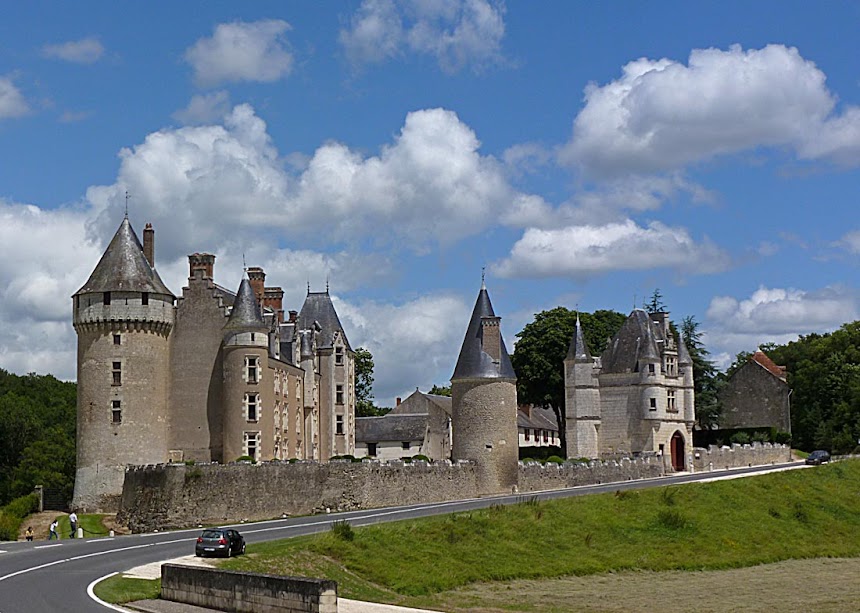 The Château de Montpoupon, near the towns of Saint-Aignan,
Montrichard, and Loches in Touraine (Loire Valley)
The chef, Marc Hammani, came out into the dining room and talked to us quite a bit. He spoke French, but when he realized we were American he switched over to English too. He told us that he worked in the Miami area (South Beach) in Florida for five years. He mentioned the Hilton Hotels. He said that yesterday, July 1, was a "transition day" in France, when people are traveling but haven't yet arrived, which explained the lack of customers. He also said he had a lot of reservations for the evening meal. Hammani has been at Montpoupon for just a year now. 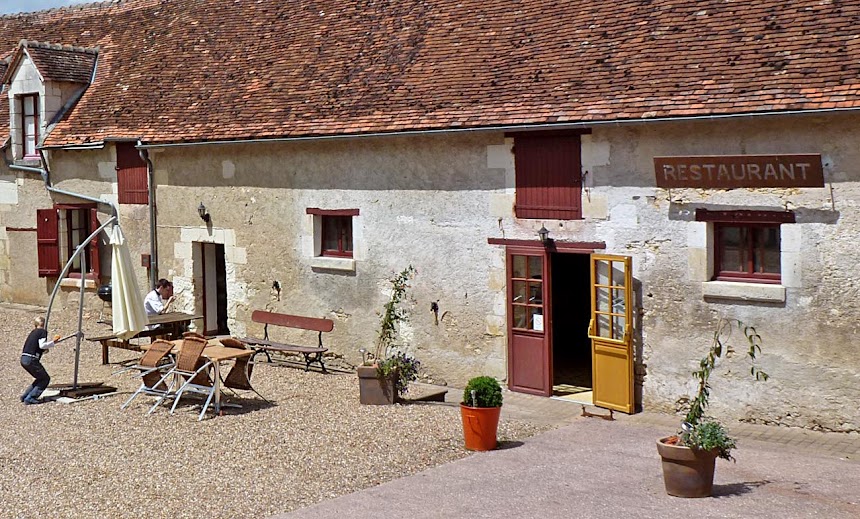 The restaurant called L'Auberge du Château is in an old
farmhouse on the grounds at Montpoupon.
We decided not to have a full menu for lunch — we've been feeding ourselves well since last Thursday evening, when Jill and Peter arrived — but to have just a starter and a main course instead, followed by coffee and just one dessert for the table. We also had a bottle of local white Sauvignon wine with our starter courses, and then a bottle of red Bourgueil (Cab. Franc) wine with the plats principaux. 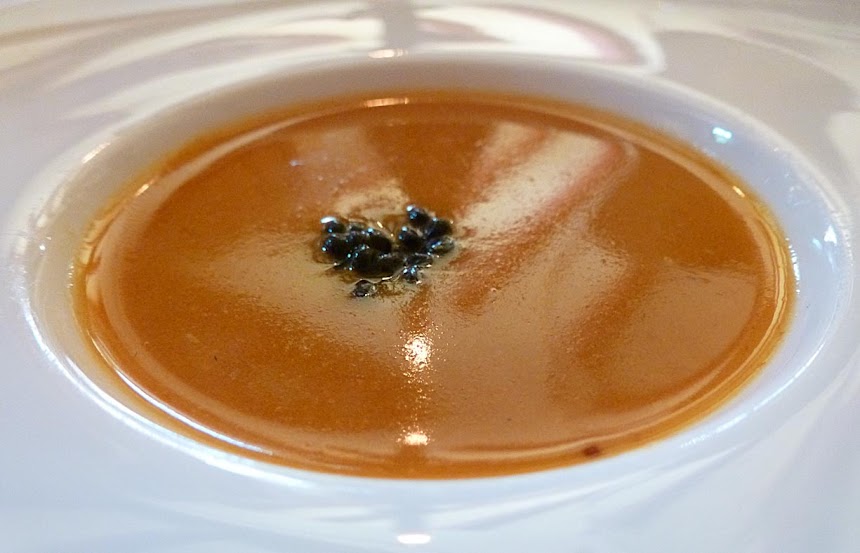 Lobster bisque with a spoonful of caviar
Peter had a starter of foie gras served as a sort of little sandwich, with a glass of coarsely pureed rhubarb. Then he had a main course of sweetbreads. He's going to give me some pictures this morning, and I'll post them tomorrow. 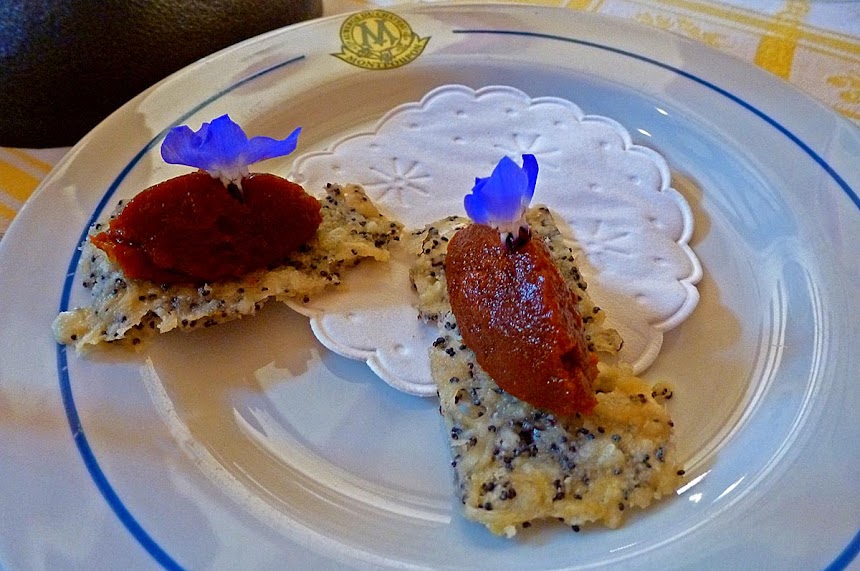 Pureed sun-dried tomatoes served on a seeded cracker
as an amuse-bouche
The meal also included two little amuse-bouche dishes, which we all had with our white wine as we waited for the first courses to come out of the kitchen. An amuse-bouche is a small plate of food designed to whet your appetite and "amuse your mouth" (Fr. bouche). The two that we had were a dollop of pureed sun-dried tomatoes on a cracker, and a little dish of lobster bisque with a small spoonful of caviar floating on top. 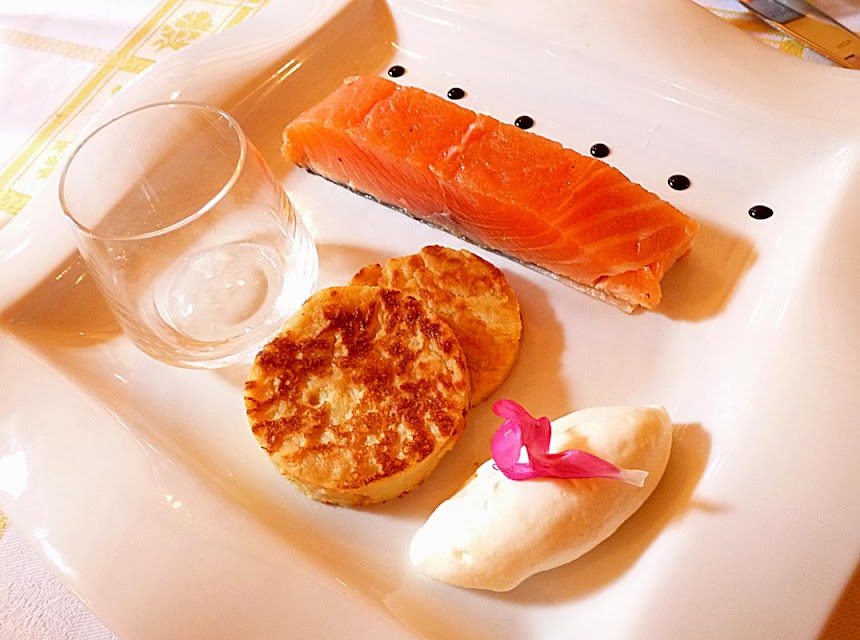 A first course of lightly smoked salmon,
crème fraiche, blinis, and vodka
Jill, Walt, and I chose a starter course of lightly smoked salmon. Chef Hammani said the salmon was cured in salt and sugar for four days, and then smoked for only three minutes. Whatever the process, it was excellent — mild, tender, moelleux, only slightly salty, and hardly smokey at all. It was served with a couple of little blinis, a quenelle ("dumpling") of crème fraîche, and a little glass of ice-cold, citrus-flavored vodka. It was, as they say, très fin — very refined.