When I think about it, quite a few of the châteaus in this area — the east side of Tours — have furnished rooms that visitors can see. Besides Montpoupon, Valençay, and Cheverny, there are the Château du Moulin near the town of Romorantin, which was still lived in a few years ago, and may be now. The Château de Villesavin, near Chambord and Cheverny, is lived in, too, and open to the public for tours. 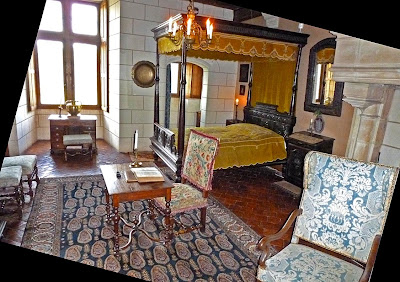 A bedroom in the Château de Montpoupon
The Château de Saint-Aignan is lived in but it is not open to the public at all. Recently, the Château de Selles-sur-Cher was re-opened to public visits, and the new owners might actually live in the building. I haven't been to see it, but I plan to go there before the end of the summer. It had been closed up for a decade or so until this year. 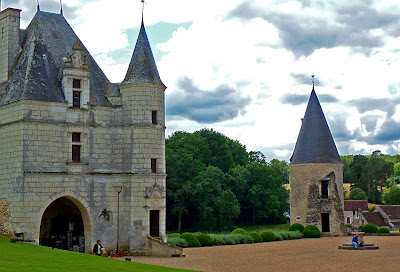 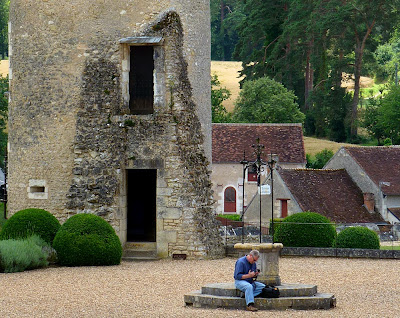 Walt at Montpoupon
Walt said he liked the photos above, showing him in the courtyard at Montpoupon on Sunday afternoon, July 1, because they give you an idea of how we pretty much had the place to ourselves. There were some other tourists wandering around, but no more than a dozen. There was no pushing and shoving, no shuffling around in a crowd. We could enjoy peace and quiet and beautiful scenery all at the same time, and spend as much time as we wanted in each room of the château and the museum exhibits. 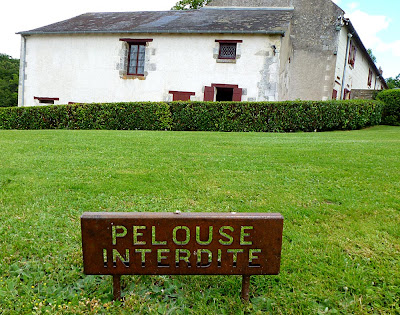 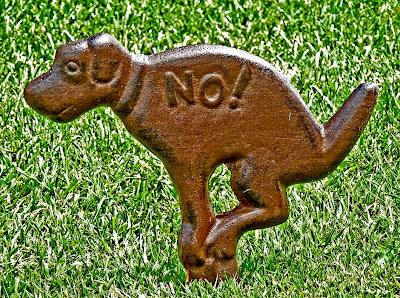 Lawn signs at Montpoupon
There were signs advising visitors to keep off the grass and to prevent their dogs from soiling the place, but they were humorous or at least attractive rather than stern and forbidding. All in all, there was a relaxed and welcoming atmosphere about the place. As far as I could tell, there's no big parking lot at Montpoupon, which might indicate that it doesn't attract big crowds (yet?). Walt just pointed out to me that there is a parking lot, and I can see it on the Google Maps aerial photo. It's not huge. 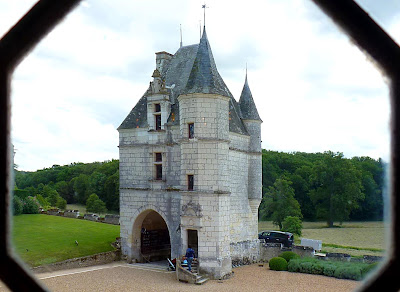 The Montpoupon gatehouse seen through a window from the main building 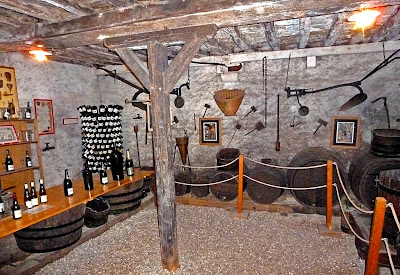