One of my purposes in posting to this "web log" on a regular basis is to keep a record and history of the time we spend, the projects we undertake and complete, and the movement of the seasons. The blog is the best way I've found to index the photos I take so that I can find them later. Many of the words in my text are actually "keywords" that I can search on.

So here it is. I wasn't thinking about this aspect of the blog when I decided a few days ago that I was tired of posting every day. For you, the web log aspect might not be very interesting, but there you go. 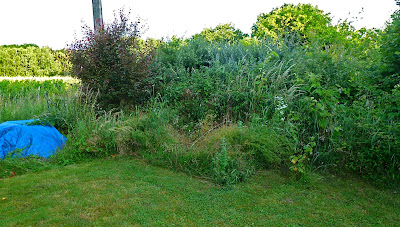 Can you tell that there's a fence under there somewhere?
That was the back corner a few weeks ago.
Yesterday we made enormous progress on a project that had been nagging at me for months. On the north side of our property — on the opposite side from the road — there's no hedge. And there's no neighbor. The land is owned by somebody, but maintained by nobody. Small aspen, sloe, and birch trees, along with "escaped" grapevines and blackberry brambles, have taken it over. 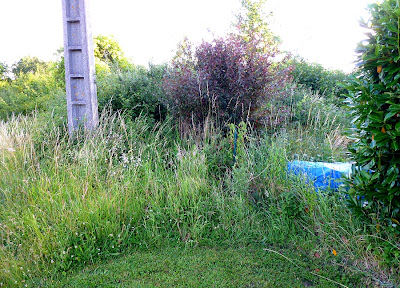 This is the same corner from the outside. Under the tarp is a
"burn pile," and that's my plum tree with the reddish leaves.
I've been told that I would be within my rights to go down to the mairie [may-'Ree], the village hall, and file a complaint against the owner of that piece of land. Then he or she would be required to have it cleaned up, because it has become a haven for undesirable animals and plants. Actually, I like having those woods there, and the animals don't bother me. It's the plants — the invasive ones. 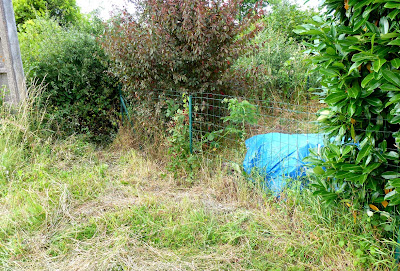 A while back, I started cutting and I uncovered the thornless
blackberry bush that I planted a couple of years ago.
The first year we lived here, we had a fence built all around the yard to keep the dog in. We put a low wire fence in under the hedge all around, because that was enough to keep poor old Collette (pre-Callie) from going through and risking her life on the road or annoying the neighbors. We had a higher fence put up on the north side, where there's no hedge.

Problem is, the blackberry brambles and untended grapevines end up growing through the fence and over it. They get heavy and they start to weigh the fence down. I'm afraid they might pull it down completely. And the blackberry thorns are particularly obnoxious. 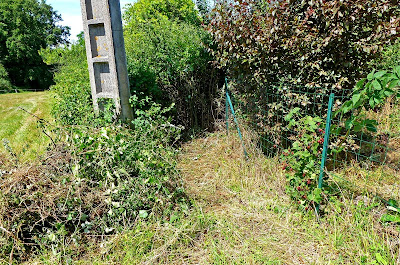 "Damn the thorns, I'm going in!"
Once I asked the woman we bought the house from how she and her late husband dealt with the invading vines and brambles. She said they just threw a lot of strong herbicides out there to hold them back. I didn't like the idea of doing that. I understand, though, that we are allowed to clean up a one-meter-wide strip along and outside our fence in a situation like this one, where nobody else is going to do it.

So there's no solution except to get in there with pruning shears, clippers, and limb loppers and start hacking away at the jungle of thorny vegetation that's trying to take over that side of our yard. That's what we've been doing this month. The brambles are — were, I'm glad to say — especially thick and tangled at the very back corner of the yard, where I've tilled up a garden plot. The soil there is loose and loamy. 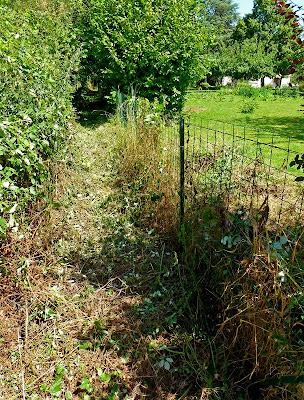 How's this? Soon we'll be able to get the mower in here.
Yesterday, we got through it, with Walt working from one direction and me from the other. The goal is to get a clear strip opened up all down the fence (about 70 meters, or 225 feet) so that we can run the lawn mower through there on a regular basis, and so that we don't have to do the same hacking job again next year. Today I'm nursing my thorn wounds. Anyway, it's raining again, so I'll go back to painting a radiator.
Posted by Ken Broadhurst at 08:02