Yesterday, summer started. We were lucky. We had a nice lunch in Montrichard, at the invitation of our friends Susan and Simon of Days on the Claise. It turned that we were 8 à table, because we were joined not only by Susan's sister and brother-in-law, but also by Sue and Leon of Melbourne — Our Home on the Bay. Sue and Leon are traveling around France right now, and blogging about it.

The bridge across the Cher River at Montrichard
Walt and I were the only Americans present — the only non-Australians, really. Australians are great travelers. We've met many people from Down Under over the past few years, and I happen to know that some Australians have now bought a house in Saint-Aignan. Others have a house, I believe, in our village, but we haven't met them. 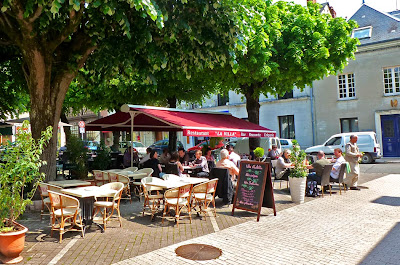 We were lucky to be able to have lunch
outdoors yesterday, here.
Montrichard is the next town down the Cher River from Saint-Aignan, and it's a 15-minute drive from our house. Walt and I seriously considered buying a house there back in 2003, but we decided on Saint-Aignan instead, for a number of reasons. It's a lively little town with a pretty riverfront, a busy Friday morning market, a medieval chateau, and plenty of attractive shops. Montrichard is also close to Amboise and Chenonceaux, two of the areas main attractions. 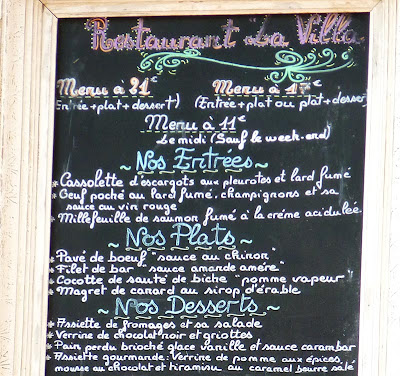 The restaurant, La Villa, has several "menus" at lunchtime,
priced from 11 to 24 euros per person.
Being virtual "locals", we all chose the restaurant's special of the day, the lowest-priced menu and the one the restaurant focuses its efforts on daily. That was the 11-euro menu — a menu in France is what we call a prix fixe meal in good English. What we call the menu is la carte in French, and you are free to order your meal à la carte instead of taking a menu — but you'll pay more. 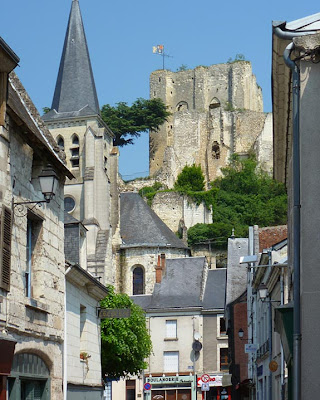 The view in Montrichard just down the street
from the restaurant La Villa.
Our menu included an appetizer of cooked lentils and white asparagus with a vinaigrette dressing as the starter course, and then a sauté de veau à la provençale — braised veal with tomato and garlic — as the main course. Dessert was an apple crumble. We washed it all down with rosé wine served in half-liter carafes — rosé is the wine you drink in France when the weather turns warm — and finished off the meal with a little cup of espresso coffee. It was all very pleasant, and we spent nearly three hours at the table, tasting and talking.
Posted by Ken Broadhurst at 08:45