We were invited out last night and didn't get home until about 2 a.m. The bread lady woke me up at 8:30 this morning as she tooted her horn out on the road to announce her arrival. I had to quickly throw on some clothes before I stumbled down two flights of stairs to get the day's baguette. 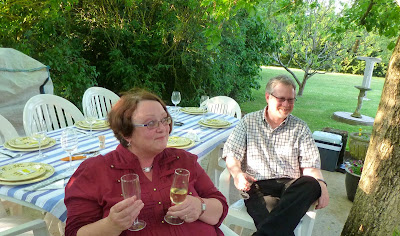 Sue and Walt having an aperitif at the table before dinner.
I'm not sure why Sue is holding two glasses...
Leon and Sue from Melbourne (Australia) have been staying with friends of theirs over across the river from our village, and those friends invited us to dinner. There were eight of us — two Australians, two Americans, an English couple, and a French couple. Sue cooked. It was delicious and a lot of fun. 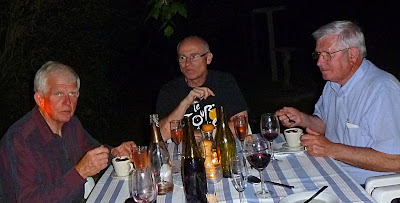 That's Leon in the middle, with one of our English hosts
and their French neighbor.
Now we're getting a late start on our Saturday. We had plans to do a lot of running around this morning, but I don't know if we'll have the energy. But we will have a very nice memory of the evening we spent, sitting outside until the wee hours, enjoying the fine weather and the fine food. I'm just putting a couple of pictures here to give you an idea. 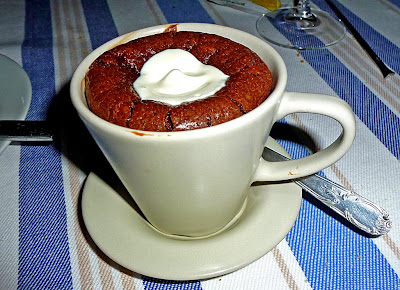 Look at this nice chocolate dessert, served in a tea cup.
I'm not sure who deserves the credit for cooking it.
I'm sorry I don't have better pictures, and more of them. If I could display my memories on the screen, I would. I should have thought to take a video.
Posted by Ken Broadhurst at 09:44