Here's a picture of Walt taking a so-called "self portrait" on the plane going from Paris to Boston three weeks ago. The 747 we were on had so few people on it that we took separate rows, with me sitting behind Walt. He must have seen this picture among the ones he took, but he hasn't mentioned it. Am I not a card? 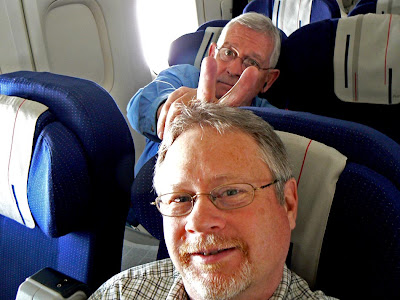 * * * *
Here's a picture of Sue (from the Melbourne area in Australia) and Susan (from Preuilly-sur-Claise in the Sud-Touraine) at lunch in Montrichard last week. We had great weather and a very pleasant afternoon with — besides Sue and Susan — Leon, Simon, Kathy, and John. 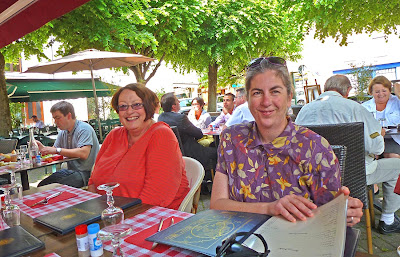 * * * *
And then here are three other pictures from Montrichard. First, some old half-timbered houses that were painted in bright colors a few years ago, with the church tower looming over them.

And finally, here's a place called Le Clos Saint-Joseph, on the riverfront just east of the bridge in Montrichard. I haven't been able to find out where it is just a private residence, or whether it is run as a hotel or B&B/chambres d'hôtes.Maybe somebody will tell me. 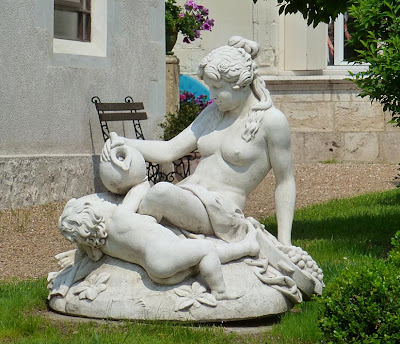 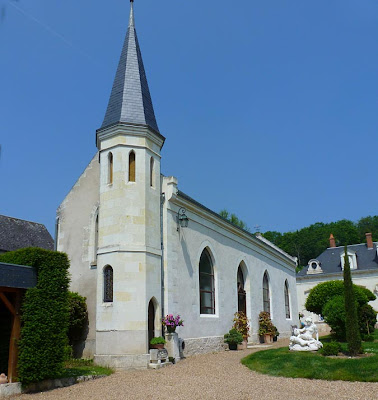 The sculpted woman was certainly enjoying that day's bright sunshine and warmth. She must be working on her tan. You can see her in the second picture as well, sitting next to what looks like an old chapel that has been converted into living quarters.
Posted by Ken Broadhurst at 08:00