I got a new camera while we were in the U.S. earlier this month. Walt got one too. The cameras were our presents to each other ourselves. Walt had been threatening to upgrade his camera for years, and he finally did it with a new Canon SLR. I decided to stick with the kind of camera I've been using for 5 years now: a Panasonic Lumix long-zoom, pocket-sized camera. 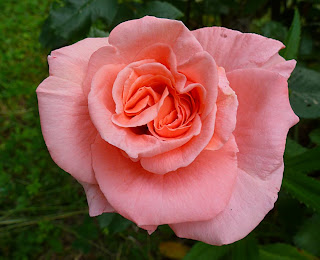 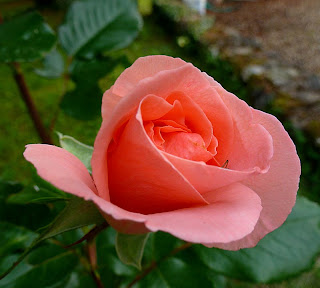 Two roses in the back yard 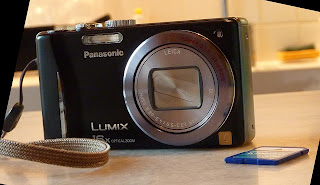 My new camera looks a lot like the old one but —
surprise — it has new and improved features.

The new camera weighs just 210 grams / 7 ounces and fits easily into a pocket. I use it with a wrist strap to minimize my chances of dropping it on the floor or ground. 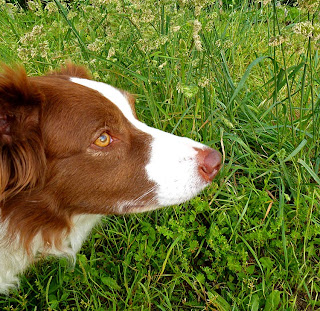 The ZS8 has many manual features, but I haven't yet experimented with them. There's aperture priority, shutter priority, and manual focus. The automatic settings and autofocus do the job for me. 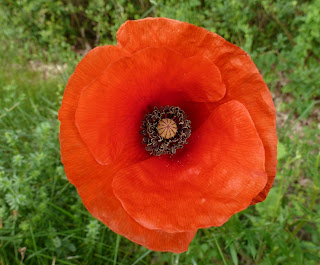 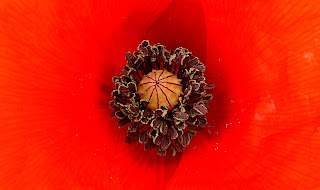 Looking into a coquelicot (poppy flower)

I also haven't used all the scene modes included in the camera's menus — Portrait, Soft Skin, Self Portrait, Night Scenery, Food, Pet, and on and on — but maybe I'll experiment with them someday. 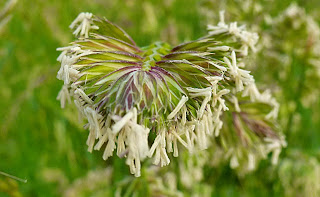 I hardly ever use the flash either. And I never use the digital zoom — at 16x, the optical zoom is sufficient. I like the panorama aspect ratio (16:9) for taking long landscape shots, and I've used the macro zoom with some success

Yesterday morning on my walk with Callie I took a lot of closeup pictures — one feature of the camera that I use a lot is its "macro" mode for taking close views. Flowers, other plants, the dog's face and whatever else get this treatment. I'm posting a few examples here.

The pond these days

P.S. Blogger has been acting up again.  A few minutes ago, when I clicked on the pictures in this post, I didn't see the expected enlargement but an image on a gray screen that was the same size as the one in the main blog post. I'm trying to figure out why. Sigh. I think it had to do with the old authoring interface. I changed to the new interface again, messed with the line spacing for a while, and finally got a satisfactory result. I think...
Posted by Ken Broadhurst at 08:55