It's almost like President Obama came to Albany to talk to us on Monday. Do you know what I mean?

The weather has improved and we spent another day running from shopping center to store to shop. We had Reuben sandwiches and pastrami sandwiches in an Albany restaurant that we used to know as the A-Frame but is now called TJ's. When you try to think of American foods you haven't had in a long time, those are the kinds of things you come up with (bad choice of words?). The sandwiches were excellent but over-generous — enormous. 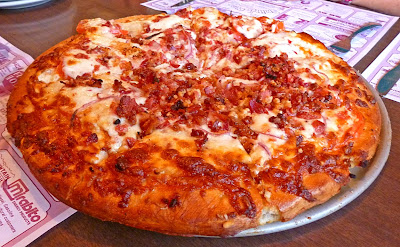 We had pizza for dinner last night at Smith's Tavern,
open since 1901. Delicious and fun.
I'm not very coherent today. Friends from far away have come to town to see us. They are doing a driving trip around the Northeast — Delaware, New Jersey, New York, Massachusetts, Rhode Island — and they made a special trip to Albany to see us. It is really a pleasure to get to spend a couple of days with them, and for Walt especially, to show them his home town. 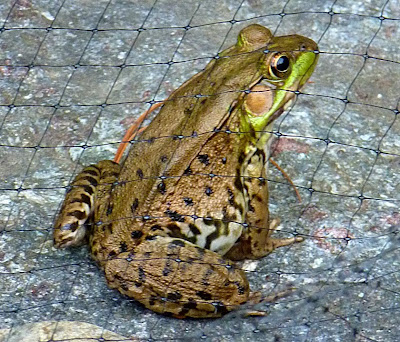 The friends we're staying with have a pond in their
back yard that is stocked with koi and frogs.
Yesterday when we rode around town, Walt drove down streets where his late grandmother used to live and where he himself lived more than 30 years ago when he rented apartments and worked for the NY state government. We discovered that his grandmother's house is being painted terra cotta red with yellow trim by the people who bought it. It was always just white before. It looks good. Jugez plutôt : 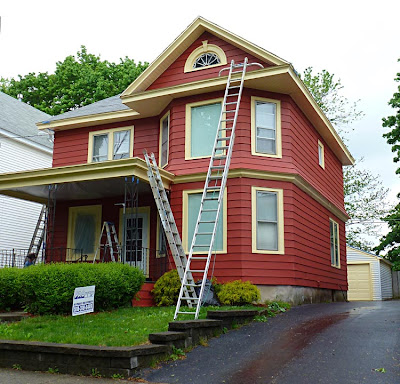 Walt's grandmother's house —
she died last year at the age of 92.

A couple of days ago we went to walk around in the Albany visitors center and see the displays detailing the history of the city. Did you know that Albany was a Dutch settlement early on? Henry Hudson established a wooden fort here as early as 1609. It later became English and the name was changed from Beverwyck to Albany. 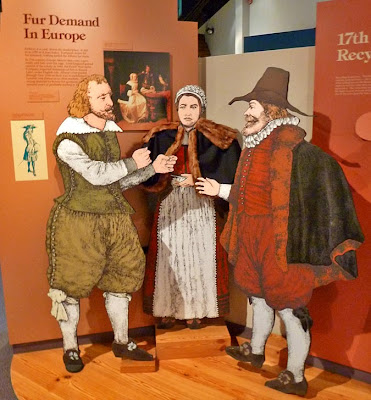 Early Dutch settlers depicted in a display
at the Albany visitors center
Albany is the seat of government of the State of New York, where the governor lives and the state legislature meets. The State Capitol building is modeled on the Hôtel de Ville in Paris. I'll take a picture of it today. Albany was the gateway to the western reaches of the country back when the Erie Canal was built, before railroads replaced it. Uncle Sam lived and died over in Troy NY, on the other side of the river. 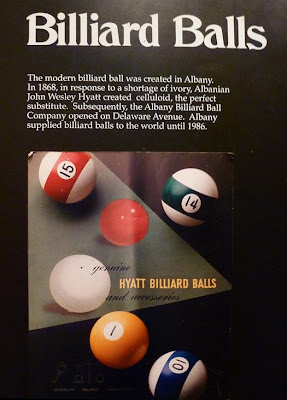 Albany is where the modern billiard ball
was invented.
Today we plan to tour the state capitol building and the cathedral, which has recently been refurbished. We also plan to go see the thousands of tulips that adorn the town's extensive Washington Park, even though they are slightly past their peak because of the unseasonably warm March weather Albany had this year. The tulips are part of the Dutch heritage, and the annual tulip festival will take place this weekend. We'll be in Montréal.
Posted by Ken Broadhurst at 08:00