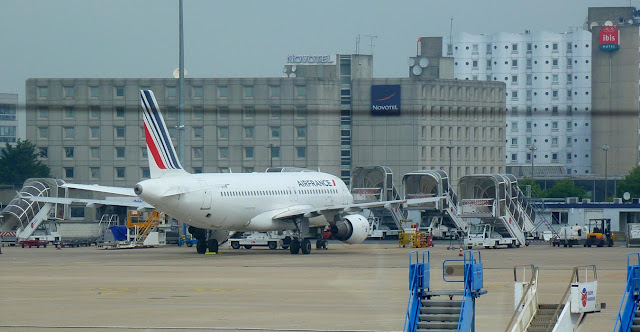 The Air France 747 was completely full for the flight back, but we had a row of two seats together so it was fairly comfortable. Besides, the flight from Boston to Paris takes "just a few minutes." Really, it was about six hours on the plane — that's all. By the time we were up in the air, had had dinner, and had napped for an hour or two, we were starting our descent into CDG-Roissy airport. We actually arrived 45 minutes early. 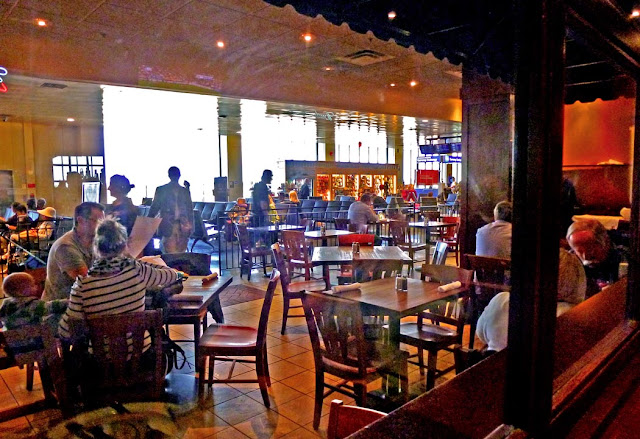 In the airport at Boston Saturday afternoon, O'Brian's pub
had free wifi so we spent several happy hours there.

At Roissy, we had nearly six hours to kill. With our scheduled arrival at 8:30 a.m., we hadn't dared reserve the 10 a.m. TGV to Tours. The next TGV was at 2:15 p.m., so we wandered around the airport, pushing all our heavy luggage on a cart and taking elevators from level to level. We sat down on benches and watched the throngs of people walk by, pointing out to each other anonymous passersby who resembled French celebrities that we see on TV and in the movies. 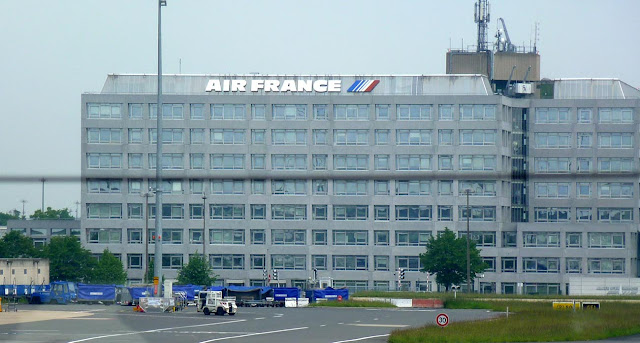 Looking out the window at Roissy's Hippopotamus restaurant

We sat down at McDonald's and had a cup of tea, just for the free wifi. We had lunch at Hippopotamus, a French steakhouse chain. The steak was good — thick, lean, and rare — and the wine was dry and familiar-tasting. We spoke French and nobody seemed to notice how we spoke it. In Montreal a week earlier, people kept commenting on our accents. One waiter thought Walt was Swiss. 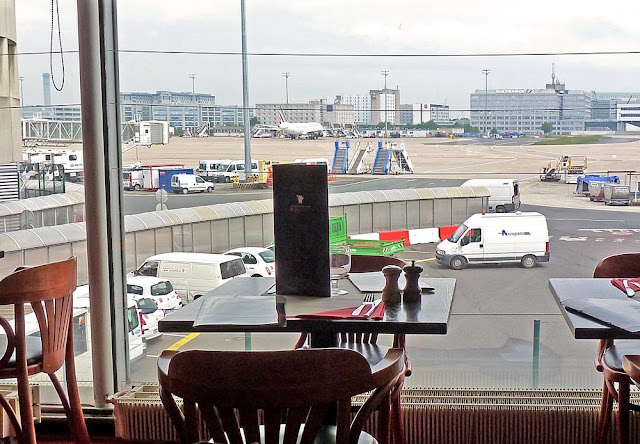 The house looks good. Outside, the grass has grown high. The rain stopped overnight, but the past two weeks have been very damp, apparently. Now we are hoping for some sunshine so that we can get started out in the garden. Grass needs mowing, and soil needs tilling. Plants need to be bought and set out in the garden plots. 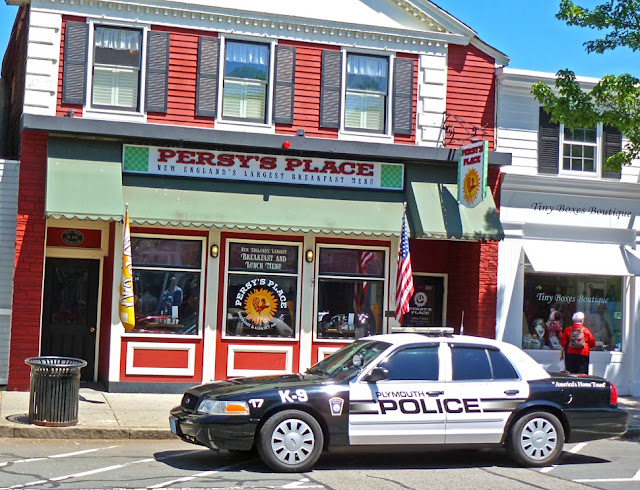 A typical American scene in Plymouth, Massachusetts,
Saturday at noontime

Callie was happy to see us, but not overly so. She spent 5 or 10 minutes greeting us and staying underfoot, but then she retired to one of her favorite sleeping spots and quieted down. Walt took her out for a walk in the rain last night, and another in the gray this morning. It'll be my turn this afternoon and tomorrow morning. Life resumes.
Posted by Ken Broadhurst at 09:40