Have you ever roasted a whole chicken in a pot on top of the stove? There are French recipes that call for cooking a chicken that way. It's less messy but just as effective as cooking a whole bird in the oven. I'm not talking about boiling, but about roasting or braising, or a combination of those two methods.

One recipe is for a chicken first browned in butter and/or oil in a thick-bottomed pot and then simmered in milk an inch or two deep, with frequent basting. The milk tenderizes the chicken and makes a rich sauce. Another is a whole chicken first browned in butter and then cooked with a cup or so of cream in the bottom of the pot, again with frequent basting. The cooking time is about 90 minutes. 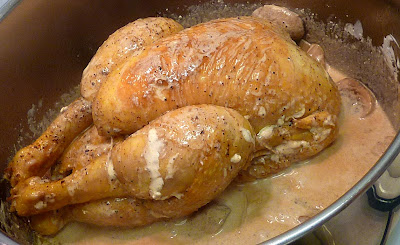 Poulet à la crème, un poulet cuit à la casserole
That's the recipe I based my Poulet à la crème on yesterday. It comes from Ginette Mathiot's book Je Sais Cuisiner, a French classic first published in the 1930s under the title La Cuisine pour Tous. An older French woman gave me a copy as a birthday present back in the late 1970s. She knew I liked to cook, and I learned a lot about cooking from her and from the book. My copy is (c)1970. 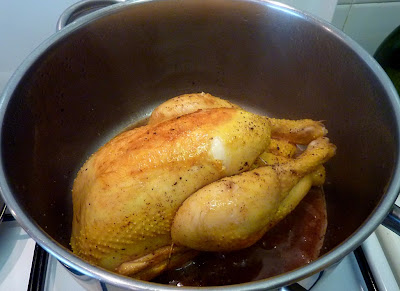 Brown a chicken in butter and/or oil in a pot on top of the stove,
and then put on a lid and let it cook slowly until it's done.
It's interesting to think that most people didn't have ovens in their kitchens until relatively recent times — since the 1920s and '30s, at the earliest — and cooking methods that required just a pot on the top of the stove were popular. Here's the recipe, which actually is a combination of two recipes in Mathiot's book. One is a recipe for roasting a chicken in a pot, and the other tells how to add the cream sauce, mushrooms, and shallots to make Poulet à la crème. 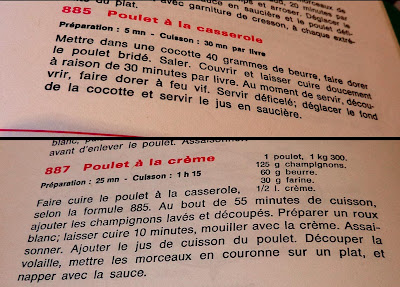 Ginette Mathiot's two recipes — Poulet à la crème is a variant
based on Poulet à la casserole.
Here's my version of the recipe, in English: 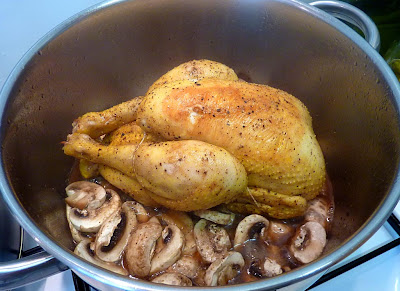 Chicken roasted in a pot with cream sauce,
mushrooms, and shallots

Melt two tablespoons of butter in a thick-bottomed pot, along with a tablespoon of vegetable oil. In the butter, brown a whole chicken, trussed, starting the chicken on its back and turning it so that both sides and the breast are lightly golden brown.

Cover the pot and let the chicken "roast" over low heat for 30 minutes per pound (about 90 minutes in all). Optionally, pour in half a cup of water or white wine and add some bay leaves or other herbs for flavor.

After an hour of cooking, add two chopped shallots and six or eight large mushrooms, sliced, to the pot. When the shallots and mushrooms have cooked slightly in the chicken juices, pour in 1½ cups of cream. (Optionally, thicken the cream with a white roux made with flour and butter.)

When the chicken is cooked, take it out of the pot, cut it into serving pieces, and spoon the sauce over all. Or serve the chicken whole and carve it at the tables. Serve the extra sauce separately. 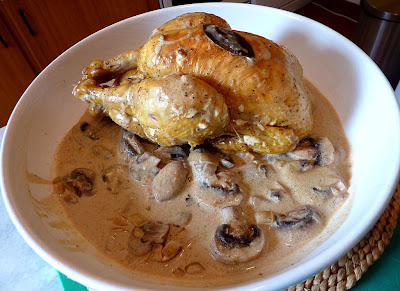 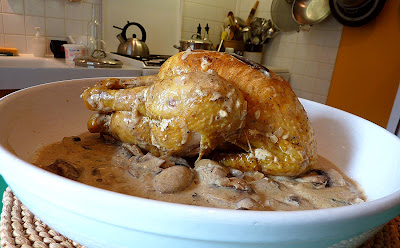 This Poulet à la crème is more of a method than it is a precise recipe. It's easy to imagine many variants. Garlic, onions, tarragon, sage, thyme, rosemary, or other aromatics and herbs could enhance the flavor of the chicken and the sauce in nice ways. Some lemon juice would brighten it up. You could even substitute a light tomato sauce for the cream, making a kind of Chicken Cacciatore.
Posted by Ken Broadhurst at 07:52