One of the most memorable moments in Montreal for me was the hour or so that we spent at the Bistro à JoJo "blues bar" on the rue Saint-Denis. The crowd was amazing — not so much in the bar as on the street out front. From homeless-looking people to well-dressed ladies "of a certain age" to bikers, older country-looking couples and young sweethearts, the whole of humanity seemed to pass before our eyes. 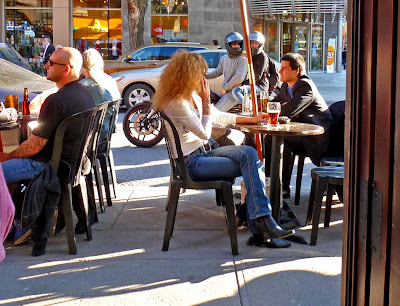 This woman seemed to be a regular chez JoJo. The waitress
stopped at her table a few times and took puffs off her cigarette.
We ordered beer because it seemed like the thing to do. The weather was hot, and beer was thirst-quenching. It made my head spin. On me, I had a pocketful of Canadian coins that I had found in a plastic bag at home in France, and I was trying to spend them so I wouldn't have to take them back with me. There were 15 or 20 ten-cent coins, a dozen twenty-five-cent coins, and plenty of five- and one-cent coins. As part of the payment for the beers, I offered the waitress about four dollars' worth of coins. 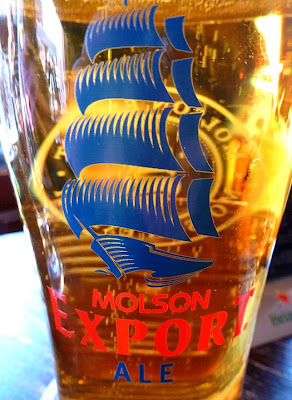 Canadian beer — or ale
She looked at the "dimes" and "nickels" and said: "We don't take those small coins here. You can't pay with those. Spend them elsewhere." She would accept the twenty-five cent coins, however, and some dollar coins. It didn't matter, but it was confusing. Earlier, I had paid for some metro tickets with old Canadian five-dollar bills from the same stash of money and caused some astonishment. The ticket-seller in the booth down in the metro must have been all of 25 years old. He looked at the banknotes which were probably older than he was and proclaimed them "relics" — he said I should hold onto such old bills because they might be valuable. 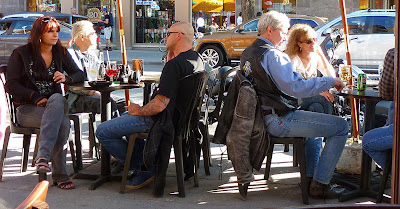 I snapped a few pictures when there was a break
in the crowd passing by on foot.
I told him he could save them but I wasn't going to keep them any longer. The last time Walt and I had been to Montreal was 1989 for one day, when we were visiting a friend in Ottawa and took a day trip. Before that, it was 1984 and 1980. I wasn't sure which trip was the source of the old Canadian money. I have little plastic bags full of Belgian francs and Italian lire at home, not to mention Irish pounds and Central African francs. All added up, it's not worth more than 30 or 40 dollars. Some of it is certainly worthless by now, but the bills are colorful and attractive. 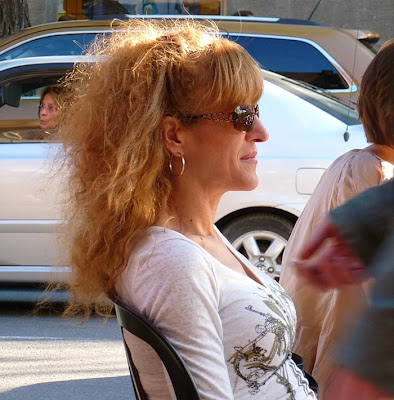 Couldn't resist sneaking a close-up. Does this woman
resemble anyone you know?
The music at the Bistro à JoJo was lively, harmonious, and pleasant to listen to. Most of it was American — Tom Petty and Johnny Cash songs are the ones I remember. I wish more of it had been Quebec music. When it was over, one of the musicians came to the table with a bag, asking for money « pour la musique. » I asked him if he wanted a handful of small change. "That's not worth anything," he said in French, but he accepted it anyway. It must have been three or four dollars' worth.
Posted by Ken Broadhurst at 08:08