May is over and done with

May 2012's last morning is a foggy one. We had some thunder and a significant amount of rain late yesterday afternoon and into the evening. It hadn't rained in at least 10 days, so we needed it.

In the two weeks since we got home, Walt has mowed the grass twice. The first time, the grass was so high that he had to use the grass catcher. That really slows down the process, because he has to stop and empty it so many times during the mowing. 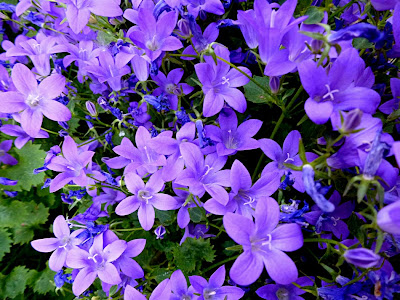 Blue bellflowers — these are called campanules des murailles,
I think — growing along the front of the house
Yesterday he mowed it again, in anticipation of the rain that was predicted. This time, it was short enough that he could use the mower's mulching feature. The job was done in less than three hours' time. 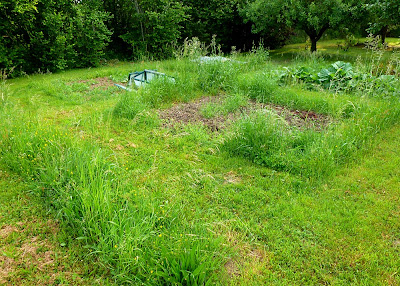 This was the state of the garden plots a few days ago.
Tall grasses and weeds had nearly taken over
by the time we got back from the U.S.
Meanwhile, I got out the tiller and worked in the garden plots again. We still haven't planted anything but a few lettuces that Walt grew from seed back in April. Those are doing well and are nearly ready to start harvesting. But we haven't yet planted any tomatoes, eggplant/aubergines, peppers, or beans. 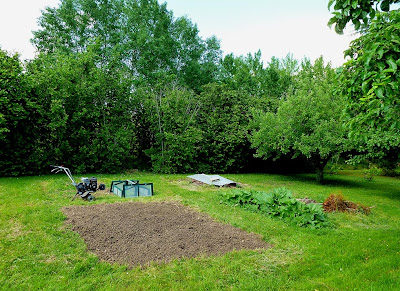 The garden after my first morning of tilling work, and after
Walt used the weed-eater to trim up the edges of the plots.
Because it rained so much in April and again in May while we were in the States, grass and weeds invaded the garden plots that I had tilled up in March. The job had to be started all over again. Two of the plots are covered, actually, with trimmings, leaves, and other yard waste that we've been planning to burn one day. Those won't have weeds on them, at least.

Here's how it looks this morning. The long narrow tilled strip
is where we plan to put in eggplant/aubergine and
bell pepper seedlings this year.
As I worked yesterday, the worst happened. The rototiller broke down. It's not the engine — that runs fine. It's the throttle handle. A part broke off and the cable that controls the speed of the engine is inoperative. 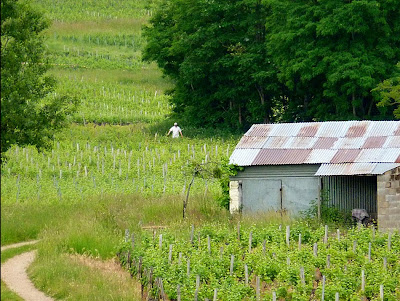 Walt coming home between rain showers yesterday afternoon
after his walk with the dog. He's on the road, but it's hard to tell.
If we can get the parts we need, it might not be hard to repair. Another option is to take it to a shop and have it repaired and serviced. The problem is the size and weight of the machine. We think we might be able to pick it up and load it in the back of the little Peugeot, but we're not sure. When we bought the tiller in 2004, we did actually put it in the car and bring it home, so I guess we can do it again. 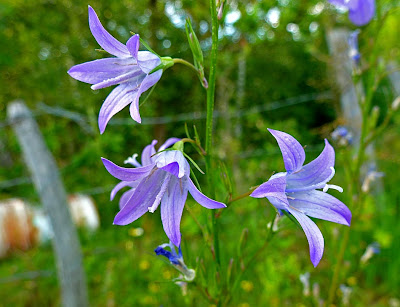 Not sure what these flowers are, but they're blooming
all around the vineyard now.
Maybe a repair shop will come and get the thing, repair and service it, and deliver it back to us. That would be the best solution. We're going out this morning to see if that's a possibility. We'll also buy some tomato, eggplant, and bell pepper seedlings to put in the ground that has been tilled.
Posted by Ken Broadhurst at 07:42