Yesterday, we had an early dinner in Maine. It was the first time I ever set foot in Maine, and I was glad to be there. The town of Kittery is just across a river from Portsmouth, New Hampshire, where we also spent some time soaking up the ambiance.

In Portsmouth, I thought about the late Bill from NH, who was a faithful commenter on this blog for a few years. Bill lived in Portsmouth. A few years ago, he came to visit us in Saint-Aignan. He had spent a few days in Saint-Aignan years ago, and he wanted to see the place again, and to meet us, including Callie. Bill passed away last year after moving back to California. I was glad to see Portsmouth for the first time but wished I could have done so when Bill lived there. 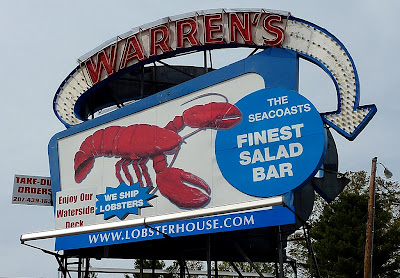 Lunch in Maine for lobster, mussels, clams, and calamari

In Kittery, we had that early dinner at Warren's Lobster House, right on the river the separates New Hampshire from Maine. I enjoyed an order of fried local clams as my appetizer, and then I chose what was listed on the menu as "Claws and Chowder" — three lobster claws served with a bib, a nutcracker, a little bowl of melted butter, and a lot of napkins — as my main course. 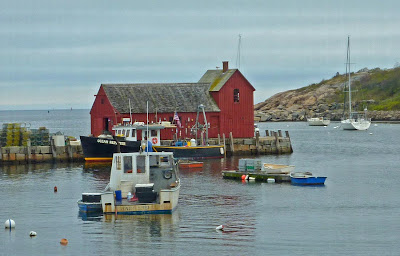 Another kind of lobster house

I managed to crack the lobster claws open and pull out the sweet meat to dip in in the butter before inserting it into my gratified mouth. I accomplished it awkwardly but without dripping lobster juice or melted butter onto my shirt, even though the bib quickly fell to floor and I didn't bother to pick it up with my buttery fingers. 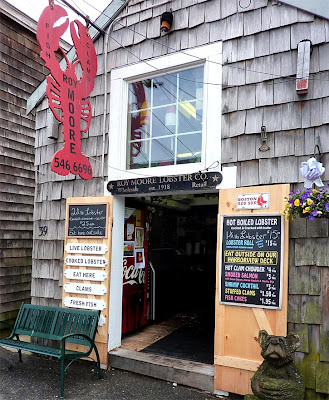 A lobster house on Bearskin Neck

Walt had fried calamari as his first course, and my old friend Bob F., with whom we are staying outside Boston and who also leaves comments here once in a while, ordered a big bowl of steamed mussels, which he shared with us. Then Walt had a classic lobster roll — a soft bun overflowing with lobster meat — and Bob had fish (haddock) and chips. We washed it all down with a bottle of Chardonnay wine from Stone Creek Cellars (Beringer), a fairly crisp California white. 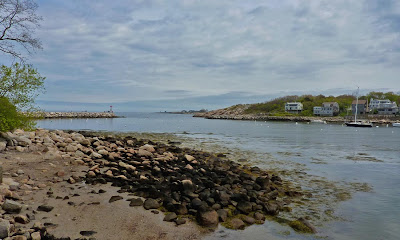 The entrance to the harbor at Rockport, Mass.

Before lunch, we took a walk around Rockport, Massachusetts, a village that is, well, a rocky port with a picturesque harbor. We had an early lunch of Caesar salads in a little grill before walking out to the end of Bearskin Neck to take some photos and enjoy a breath of salty sea air. The grill didn't serve wine, but the lemonade was good. I asked for bread — they don't seem to serve it much — and out came some big soft rolls with a little tub of cinnamon butter. I liked the bread but without the butter. 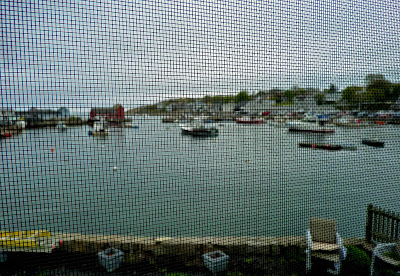 The windows have screens on them here to keep insects out.

In Portsmouth we stopped in a micro-brewery pub and had a pint. Mine was stout, Walt's was lager, and Bob's was pale ale. The manager of the pub looked at Walt, who was wearing a NY Yankees cap, and told him he was brave to display such a symbol so near Boston. It turned out the manager was also from New York originally. He proceed to "comp" our beers, which means he made them complimentary — we didn't have to pay. Amazing. 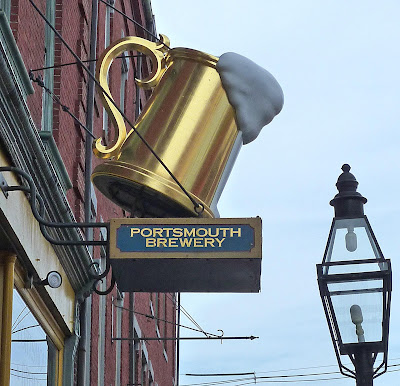 The people in the restaurants are all smiles and good-naturedness. Of course many of the people in the same roles in Saint-Aignan are like that too. But there's something inherently easier when everybody is speaking your native language, even if it is with a sharp Yankee accent.

Today we're off to Albany. New York will be our fourth U.S. state in two days. You could only accomplish that, in a cake walk, in New England, where the states are small even if the cars, shopping centers, and even the "small" towns all seem to be huge.
Posted by Ken Broadhurst at 13:00