It rained all day yesterday. It didn't matter. Yesterday was our main shopping day. We headed out before 9 a.m. and got back "home" at 4 p.m. Lunch in a wings joint was included.

President Obama visited Albany yesterday. He made a speech at the State University of New York's Albany campus, just a few miles from here. We had to be careful about choosing a route for our shopping that wouldn't put us in the area of street closures required to let the Obama motorcade get to and from the airport. We didn't see the president, but it was nice of him to drop by. 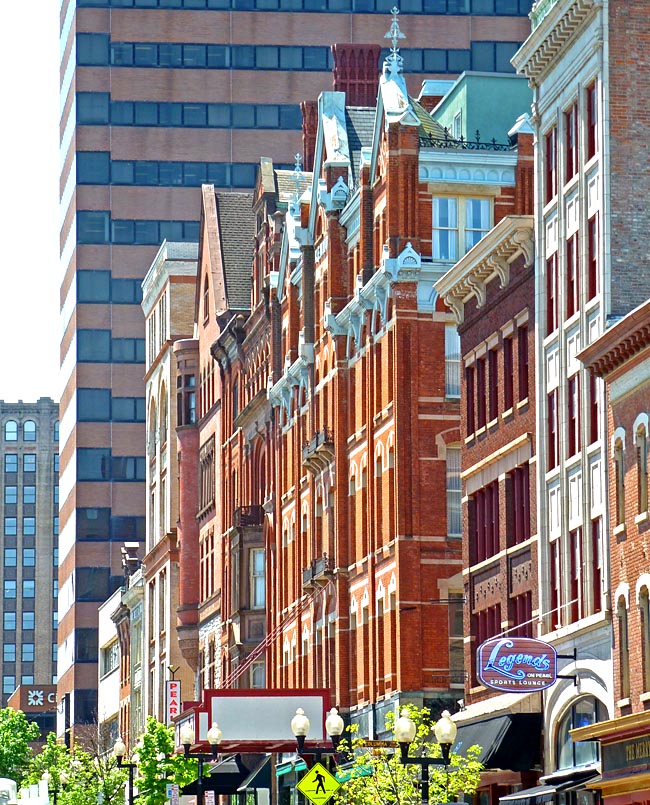 Old and new in Albany NY
We saw miles of parking lots with standing water on them, however, and we had to tread carefully so as to keep the only pairs of shoes we brought with us from getting wet. We had to make a dash for it to get from the car to a sheltered spot or the front door of a store. The main things we shop for are drugstore items and clothes that are much less expensive in the U.S. than in France. 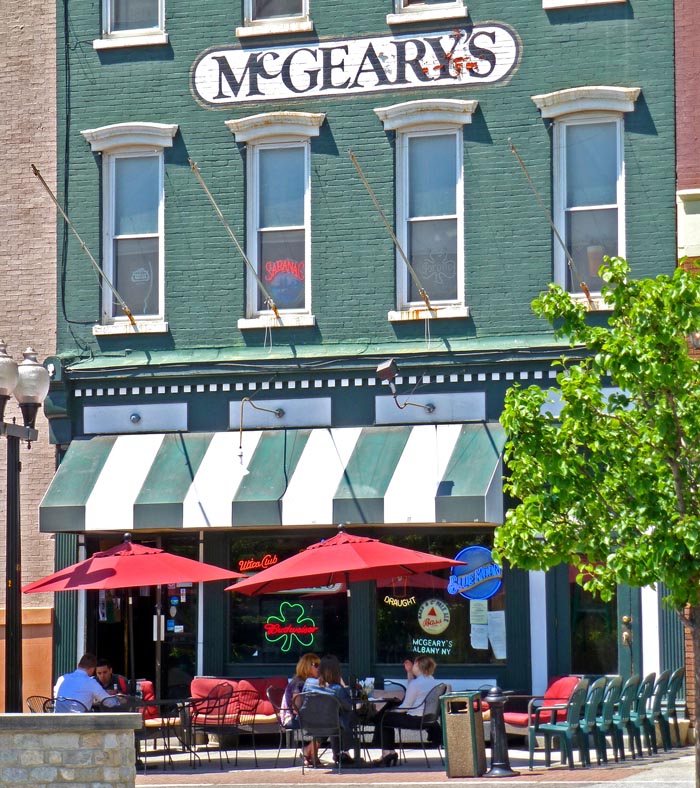 Monday was gorgeous and people were
sitting outside at lunchtime
And remember, around Saint-Aignan, there aren't that many shopping venues. We don't have a mall, and the countryside isn't littered with strip malls. We don't have any stores that would be the equivalents of Wal-Mart, K-Mart, Bed Bath & Beyond, Marshall's, Radio Shack, J.C. Penney's, or Target. 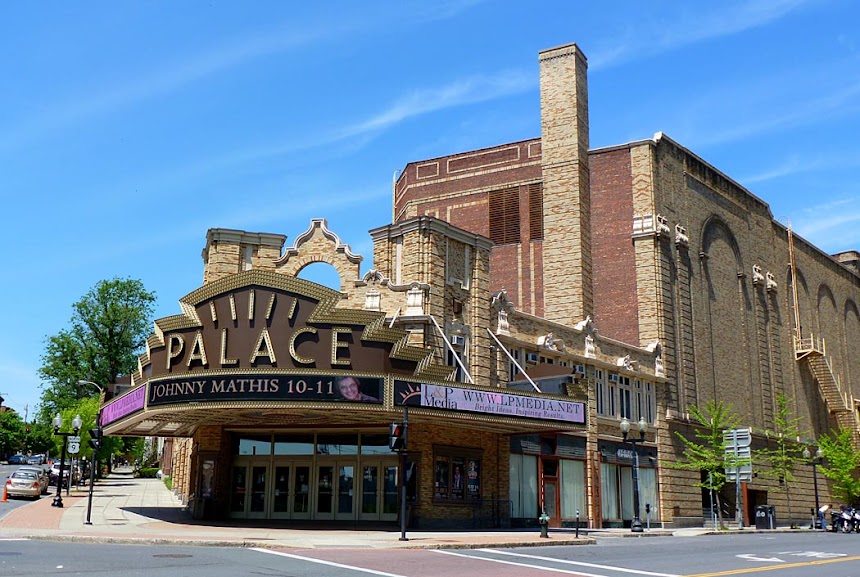 The old Palace Theatre in Albany — upcoming shows
will feature big names like Johnny Mathis,
Bonnie Raitt, and Gordon Lightfoot
We also don't have traffic, because the population density is so low. We don't often drive 40 km, as we did yesterday, just to shop in a specific store or have lunch is a specific restaurant — though once in a while we drive down to Loches or up to Blois or over to Romorantin to do some special shopping. The roads are narrow two-lane tracks, not the wide multi-lane expressways you can take to zip from one part to another of the N.Y. State Capital District. 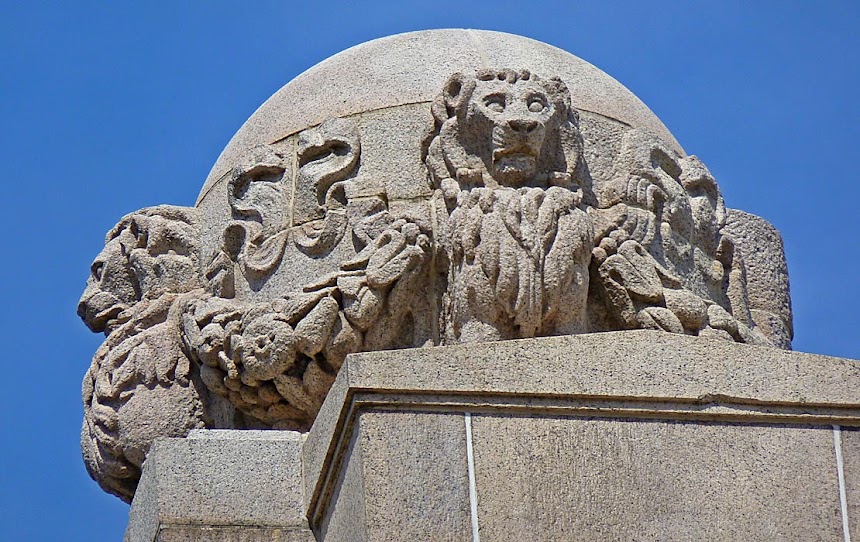 Albany architecture details
I just looked up the Town of Bethlehem on Wikipedia. Bethlehem is where we are staying, just south of Albany, with old friends. It turns out that the town is spread out over 128 sq. km and has a population of just under 35,000. Now the city of San Franciso, where we used to live, has an area of 122 sq. km, and a population of 800,000. Paris covers the same surface area, with a population of more than two million. 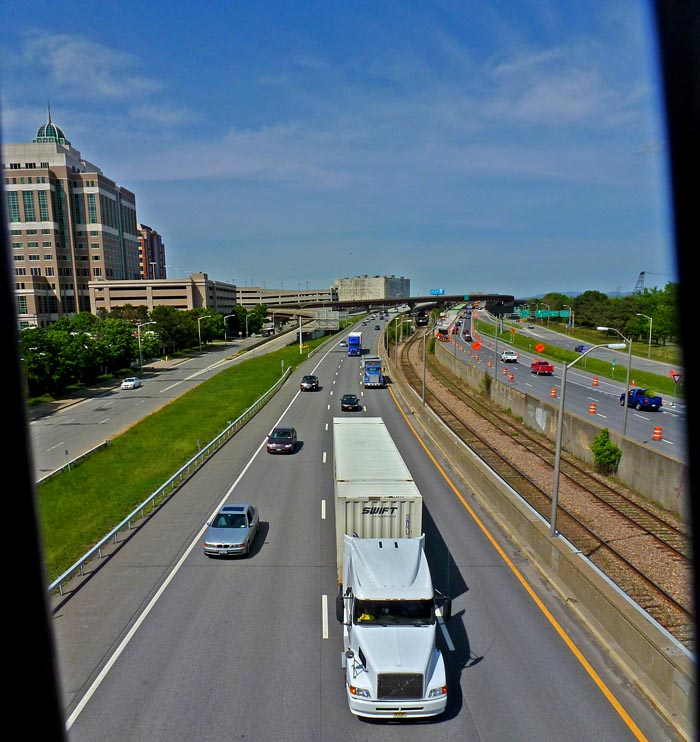 Big freeways run along the Hudson River at Albany
It's not exactly lonely out here south of Albany, but you see the difference. But get this: the administrative unit called the Canton de Saint-Aignan sits on 326 sq. km, and the total population is 17,000. So 2½ times the area of Bethelehem NY, and half the population. We Saint-Aignanais are not swarming like ants, that's for sure. 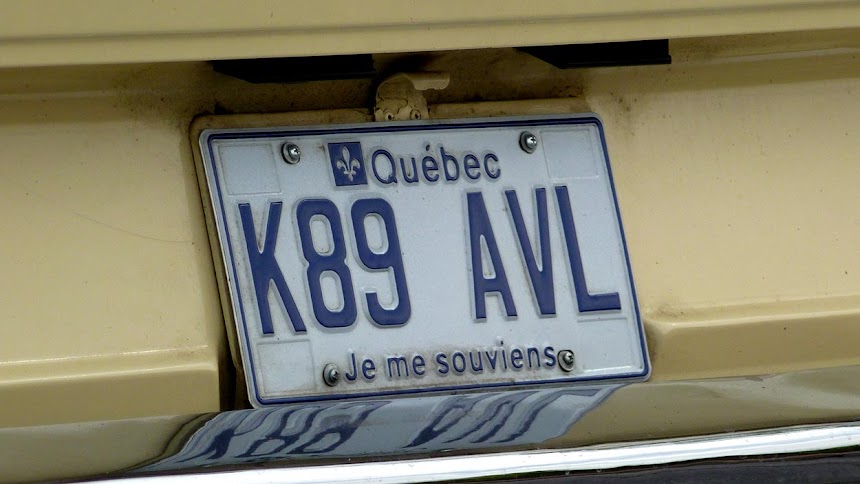 Noticed this plate on a car in Albany the other day
Anyway, here we are for another 48 hours before we drive up to Montréal to spend the weekend visiting people we know or will be glad to get to know up there. It's all because of blogs. In fact, last night we had dinner with a group of people in a Mexican restaurant over in Troy NY, on the other side of the Hudson River and little north of Albany. We met some of these people through their and our blogs. A good time was had by all, I think.
Posted by Ken Broadhurst at 08:53