Lagging in gray and green

I've always found jet lag to be worse coming to France compared to the little bit of jet lag I get when I fly from France back to the U.S. That's the conventional wisdom, too. It has to do with traveling in the opposite direction of the sun — from west (North America) to east (Europe).

It also has to do with spending the night on an airplane and not getting a good night's sleep. When I fly to the U.S., the very long day that I spend on the plane turns into night, and bedtime, when I arrive. Our flight over to Boston from Paris, for example, took off at 4 p.m., and we arrived at 6:00 p.m. We spent the evening having dinner and catching up with our friend Bob, who put us up for the first two nights, and then we slept from midnight until 8 a.m. We were nearly back on schedule by then. 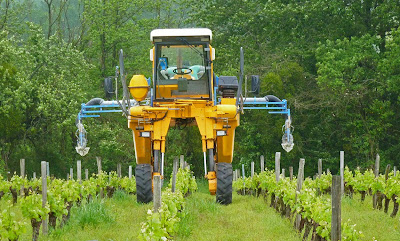 I'm not sure why this piece of farm equipment is just parked
out in the vineyard. Maybe it broke down.
Coming back on Saturday and Sunday, we had a 7 p.m. flight. We slept just an hour or two on the plane, and we were on the ground in Paris at 8 a.m. We had a full, sleepless day ahead of us, especially because we had 6 hours to kill at the airport before catching a train back to Saint-Aignan. Taking a nap was not really a possibility. 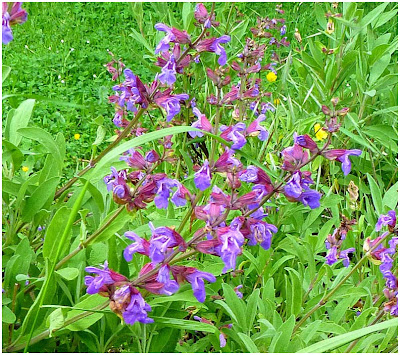 Sage in in bloom in the back yard.
This morning I was awake at 4 a.m., but I went back to sleep around 6 and had a hard time dragging my groggy body out of bed at 7:30. Yesterday afternoon I snoozed from about 3 until 6, despite my best efforts to remain awake and active. All the gray skies we're experiencing don't help. The rain has stopped, but the sun hasn't yet broken through. Sunshine is the best antidote when you're jet-lagged. 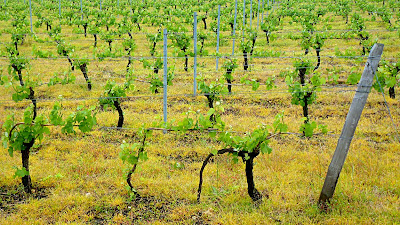 This picture would be a lot greener if herbicide hadn't been
sprayed up and down the rows of vines.
One thing about all the rainy weather that has descended on the Saint-Aignan area since early April — everything is certainly green. We needed the rain, because drought conditions were threatening. Now we need warmth, and MétéoFrance is promising us temperatures in the 70s F over the next three days. The grass will grow even taller. There are shoulder-high weeds out in the vegetable garden plots. 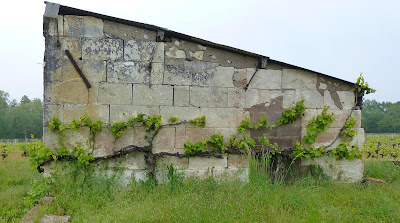 Even the vines on the old stone hut in the vineyard seem
to be late. Lack of sunshine is probably to blame.
We won't be able to plant tomates, aubergines, and haricots verts until the ground dries out enough to be tilled, so the garden won't be an early one this year. Yesterday we were remarking to each other on the state of the vineyard out back. The vines seem to be a month behind where they were a year ago, when we had a dry, sunny, warm spring. 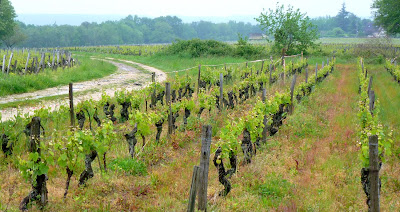 With some sun, the vines and tendrils will grow pretty fast.
After the grass dries out enough to be mowed, we'll go to one of the local outdoor markets or to a plant nursery and buy the tomato and eggplant seedlings we decide to plant. Walt will grow green beans from seed. I think I'll try again to grow some okra from seeds — I brought some back from the U.S. Planting okra proves how optimistic I am, because okra need hot, sunny weather in order to thrive.
Posted by Ken Broadhurst at 07:55