Montreal and the border crossing

We're in Vermont now, near Burlington. We'll be leaving in a few minutes to drive south to Middlebury, Rutland, Manchester, and Bennington before returning to Albany NY this evening. 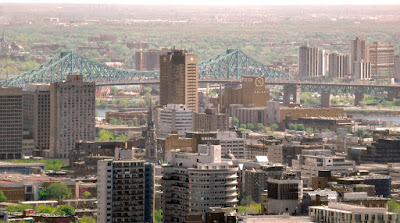 Montréal and the Jacques Cartier bridge
Yesterday when we crossed the border from Canada into Vermont, the border control officer asked a lot of questions but he didn't make us open our trunk or any of our bags. The first thing he wanted to know what our relationship was. I wanted to say "none of your business" but of course you can't do that. I just said we'd been living together for a long time, and that seemed to satisfy him. Doesn't that seem like an intrusive question? Does every group of people crossing the border have to answer it? 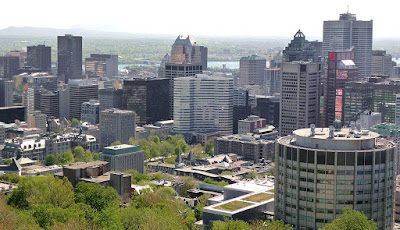 He also wanted to know why we were crossing the border on a little back road instead of on an interstate highway. I said that we were touring around, and that we wanted to drive down along the islands in Lake Champlain to Burlington. He asked us why we'd be going to Albany via Burlington, and again I wanted to tell him it was none of his business. But I said we were going to spend the night in Burlington because we'd never been there before. 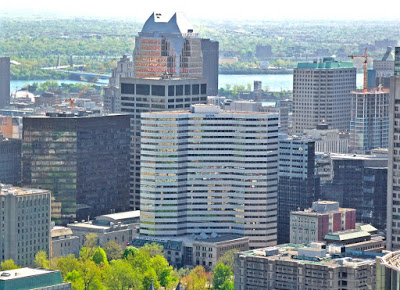 I also told him that a few minutes earlier we had bought two bottles of wine that were labeled as « élaboré au Québec » — who knows where the grapes or grape juice came from — but we were carrying nothing else besides a newspaper. He accepted all that and let us go on our way. 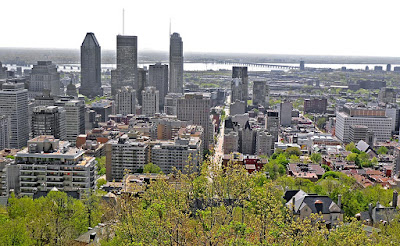 We had driven the 40 or 50 miles down to the border along the banks of the Richelieu River, which flows north out of Lake Champlain into the St. Lawrence River near Montréal. We drove around for a few minutes in the little Quebec town of St-Jean-sur-Richelieu, but it was raining off and on so we couldn't get out and take the walk we had planned. The drive down the river and across the islands and bridges in Lake Champlain was picturesque. It's a very remote area, even though it's not very far from Montréal or Burlington VT. 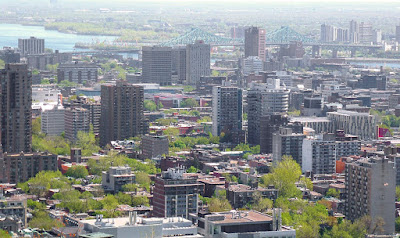 Saturday morning in Montréal we went up to the top of the Mont Royal, after which the city is named. From there, you get panoramic views. Some pictures are included here. Montreál is a sprawling city of 1.7 million people in the middle of a metro area with a population of four million.
Posted by Ken Broadhurst at 08:57