Out of here, ou presque

Tomorrow is the big day. We're getting a 7:15 a.m. train from the gare de Saint-Aignan/Noyers over on the other side of the river, not 10 minutes from the house by car. Forty-five minutes later we arrive at the TGV station in the Tours suburbs at Saint-Pierre-des-Corps, where we have an hour to wait. It'll be enough time for a cup of coffee or tea and a croissant. And a newspaper.

The 9:00 a.m. TGV will take us directly from Saint-Pierre-des Corps to Roissy-Aéroport Charles de Gaulle, without a stop in Paris. We'll be at the airport before 11:00. That'll give us time to have lunch and walk around the airport for a while. Walt has never ridden the relatively new people-mover train that zips passengers from one terminal to the other on the spread-out airport facility. So we'll go for a ride over the Terminal 1, I think, just for fun. 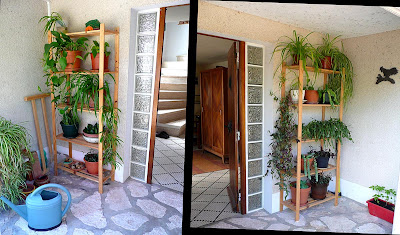 Most of the houseplants are out on the little sun porch,
where they'll be easy to water while we're gone.
Our Air France flight is scheduled to take off just after 4:00 p.m., and with the time difference we'll be stepping (driving, really) out of the airport on the other side of the Atlantic at 6:00 p.m. That's midnight Paris time, so the trip will take 18 hours from the time we leave the house until we get our bags and leave the airport. It'll be interesting and strange to be in the U.S. again. My last trip was over a year ago, and Walt's was nearly three years ago. 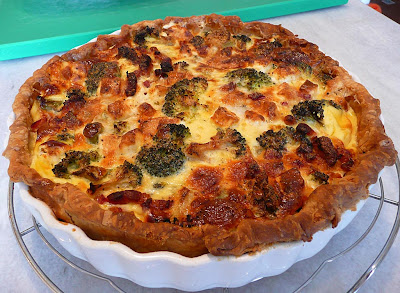 Yesterday's lunch was a quiche with broccoli,
(smoked bacon) lardons, and goat cheese.
The weather, by the way, has suddenly turned beautiful in Saint-Aignan, with sunshine and warmth. I'm glad, because the friend who will be taking care of our house, the dog, and the cat for the next couple of weeks will be able to enjoy spending time outside. With any luck, she'll be able to let Callie and her dog go play in the yard. By the time we get back, it really will be springtime.
Posted by Ken Broadhurst at 07:30