Focaccia, or fougasse in Provence

It was a spur of the moment thing yesterday morning. I wanted to make a fougasse. That's the Provençal term — in Italy, it's called focaccia. It's pretty easy to do if you have a stand mixer or a bread machine that can mix and knead the dough for you. The main time you spend is waiting for the dough to rise. I made the dough in the stand mixer but, in fact, Walt said he wanted to take the dough out of the mixer and knead it by hand. He likes to touch dough — il aime mettre la main à la pâte. Je ne demandais pas mieux — it sounded like a good idea to me. I watched him work, and in the meantime I rubbed the inside of a big bowl with olive oil so that the dough could rise in it without sticking. 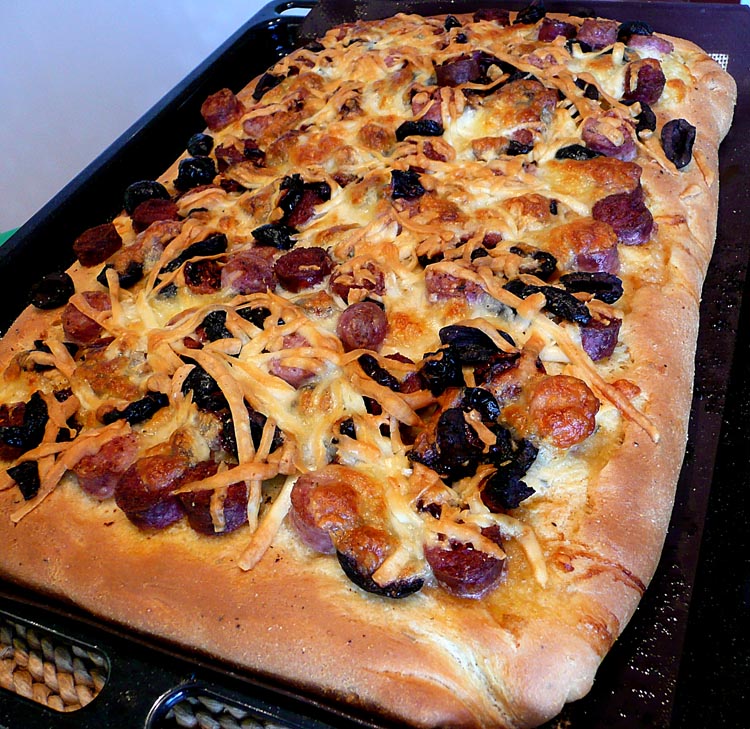 La fougasse — focaccia bread with toppings
We are busy using up some of the food that we have in the refrigerator, in preparation for our departure Friday morning. Some of that food included a little round of mozzarella; a piece of romano cheese; some chipolata (pork) and merguez (beef/lamb) sausages; black olives; and sun-dried tomatoes (oven-dried, actually, from last year's vegetable garden). 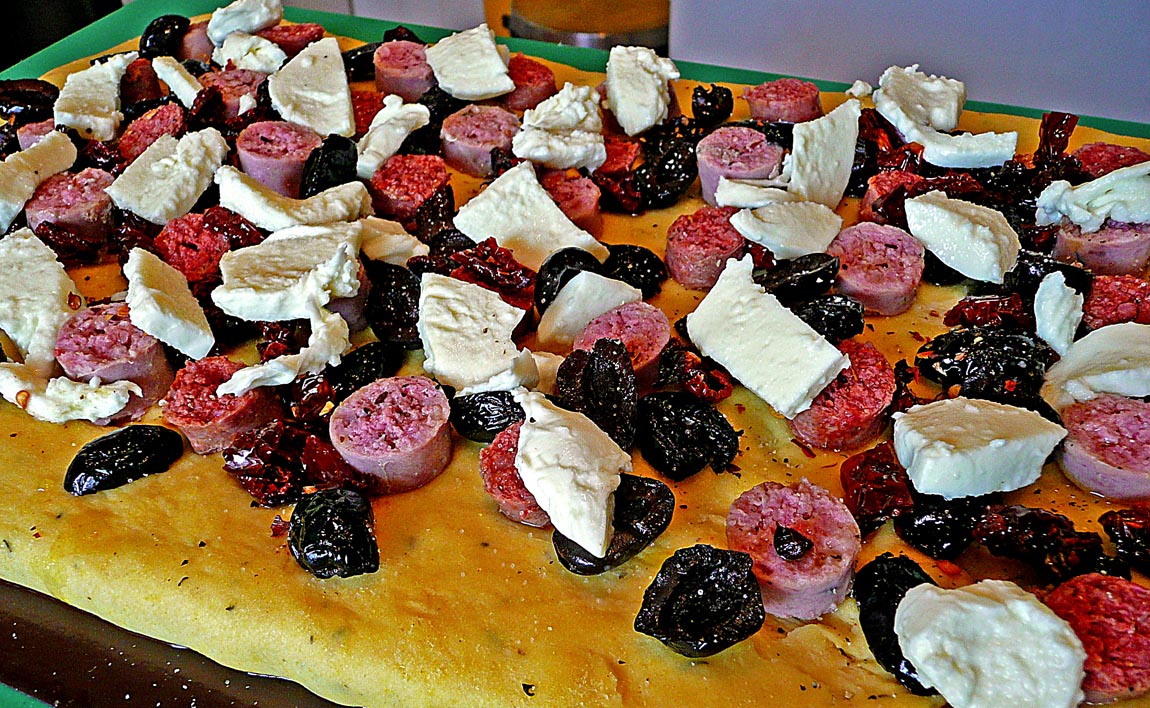 Put on the toppings (olives, sausage, tomatoes, mozzarella)...
It seemed like either pizza or fougasse was the way to go. The main difference, I think, is that pizza is topped with a more or less liquid sauce (tomato or other) and the crust is usually thin. Fougasse is a thicker crust with toppings but no sauce. Sometimes olives, lardons (chunks of bacon or ham), or sun-dried tomatoes (etc.) are mixed directly into the dough before it's baked. And you just spread the dough out on a pan with your hands before you put on the toppings. It's easy. 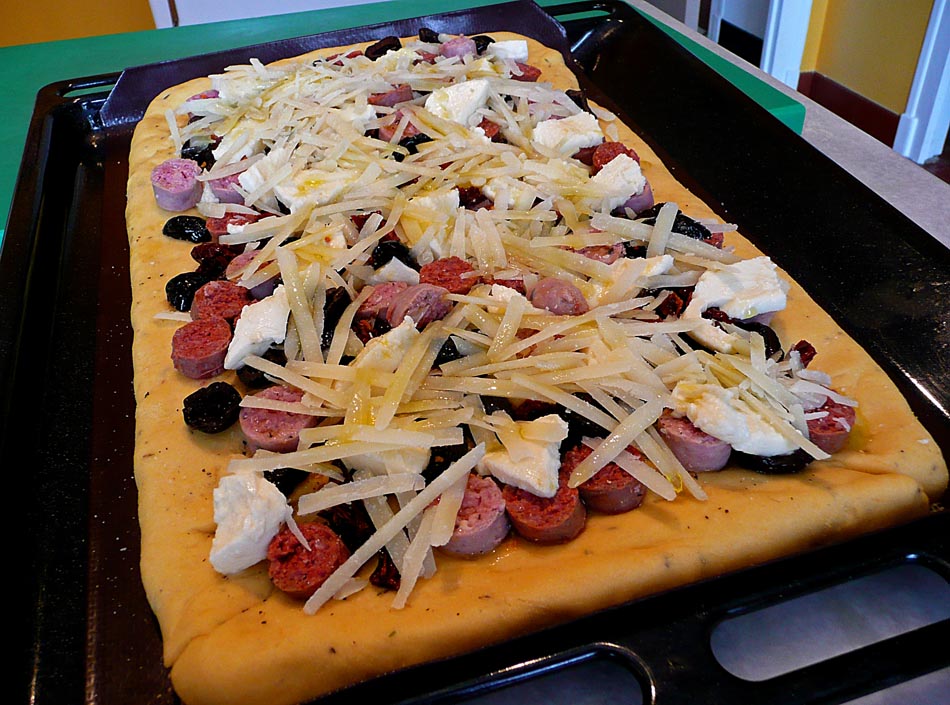 ...and cover all with grated romano or other cheese
This recipe is really good and I like the cornmeal mixed in with the dough. Cornmeal is what they call semoule de maïs or polenta in France. It's even called farine de maïs or "corn flour" but it's not the same thing as what we Americans call cornstarch, which the British call corn flour and the French Maïzena, using a brand name. Anyway, the cornmeal is optional in this recipe. Use five cups of flour instead of 4 cups flour + 1 cup cornmeal if you don't have cornmeal. (A cup is 240 ml — about one-fourth of a liter.)

In a small saucepan on top of the stove or in a measuring cup in the micowave, heat the milk, water and butter until very warm — 50ºC (120ºF). In a large bowl, mix 2 cups of flour with the yeast, sugar, salt, thyme, and black pepper. Stir the wet ingredients into the dry ingredients, and then add the egg. Stir in two more cups of flour and the cup of cornmeal, half a cup at a time, mixing well after each addition. When the dough has pulled together, turn it out onto a lightly floured surface and knead it until it's smooth and elastic, about 8 minutes. Add more flour as needed, or more olive oil.
Shape the dough into a ball, and put it in a bowl brushed with olive oil. Cover it and let the dough rise for 2 hours in a warm place. It should double in volume. When it has done so, punch it down and spread it out on an oiled baking sheet, parchment paper, or a silicone pad; let it rise for another 30 minutes. Add toppings — black olives, sun-dried tomatoes, pre-cooked lardons, ham, or sausage rounds, grilled onions, herbs, and/or some grated cheese. Drizzle some olive oil over all.
Bake at 425ºF (210ºC) for 30 minutes, or until golden brown.

Let the fougasse cool a little before you cut into it. Serve it with a salad. No need for any other bread.