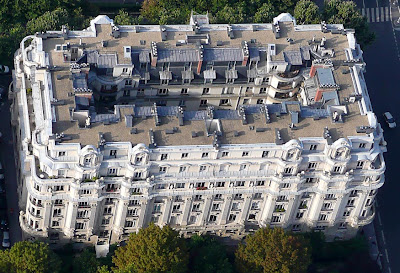 Looking down on a big apartment building
that sits almost directly under the Eiffel Tower
I still haven't been out of the house for more than two minutes at a time since I got back from Paris. This is not the first time I've ever had a bad chest cold, or bronchitis, or pneumonia, or whatever it is. The contrast, though, is what's striking. After a week of spending a lot of time on the streets of Paris, Saint-Aignan, Amboise, the Mont Saint-Michel, and other places on foot, not to mention many hours on the roads and highways behind the wheel of the car (which I enjoy), suddenly I'm confined to quarters. The last time I walked Callie was probably September 23. 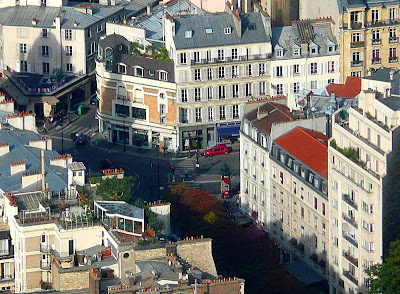 It's very cool to be able to look down into Paris
neighborhoods from up on top of the tower.
So when I look back at activities like driving up to the MSM and climbing around on the ramparts there, or the grand tour of the Loire Valley châteaux, and especially going up to the top of the Eiffel Tower and tromping all around Paris that Friday, it all seems a little like a dream. 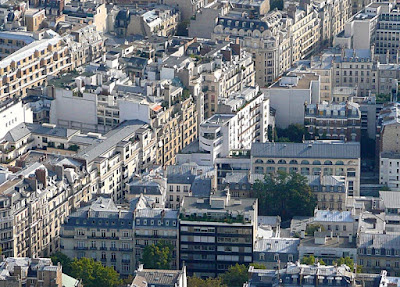 Ten years ago Walt and I stayed several times in an
apartment in this neighborhood, not far from the ET.
When we came down from the heights, we wandered up the Champ de Mars parade grounds toward the Ecole Militaire, turning left on the street that leads over to the big intersection of the Rue Saint-Dominique, the Avenue Rapp, and the Avenue de la Bourdonnais. That's where the café called the Champ de Mars is located. It's a café Walt and I enjoy going to for a steak and fries or a nice dinner salad when we're in Paris. A group of buildings located along the Champ de Mars
Joanna and I had had dinner there about a week earlier. We ordered cheeseburgers, and they came without bread. It was just a hamburger patty with some cheese melted on top and some fries alongside. I told Joanna I was sorry there was not bun, but she said she actually preferred it that way. The only thing was that the meat, as usual, was served pretty rare, even though Joanna requested it cooked medium. That's Paris for you. 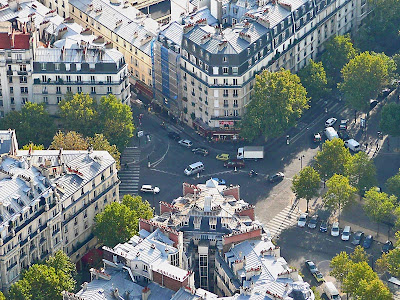 The intersection where the Champ de Mars
café is located, seen from above.
You see, at this point in the morning Joanna and Janice really wanted or needed some hot coffee. Coffee sounded good to me too. We had arrived at the hotel at midnight the night before, and then we got up at 7:00 and headed out as soon as we could, to beat the lines at the ET, without having any breakfast at all, not even coffee. By now it was getting close to 11:00. 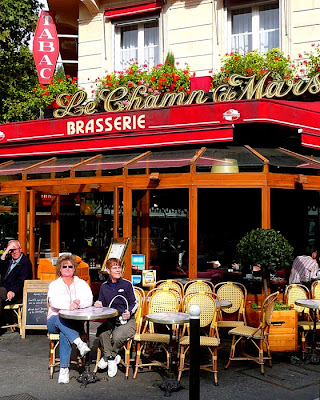 J & J waiting for their cafés allongés
at a table out in the sunshine
J & J both thought the coffee in French cafés and restaurants was way too strong. Most Americans do. They don't want a little cup of concentrated espresso coffee. They want a bigger cup and a more watery brew. Over the years, I've found out that what you ask for in such cases is not a grand café noir, because that will just get you a bigger cup of strong espresso. What you ask for is a café allongé, and what they bring you is an espresso made in a bigger cup and topped off with an equal volume of hot water. 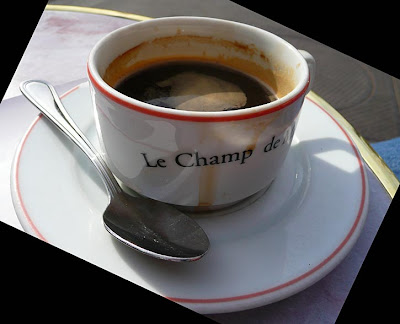 Un double express au Champ de Mars
If you're lucky, they will also bring you a little pitcher of very hot water so that you can continue to dilute the coffee yourself. And some extra sugar. You can request either one, actually. At the Champ de Mars café, we had two cafés allongés and (for me) un grand café noir (also called un double express). I prefer espresso. Only once in a while is it bitter or too strong. It's usually a delicious, rich syrupy liquid that needs one lump of sugar. To me, it's more satisfying than American coffee. It's almost a dessert. 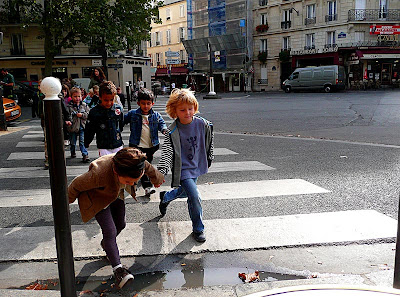 Watching children step over a puddle
in front of the Champ de Mars café
At the Champ de Mars, we drank our coffees and finished waking up, watching the people walk by on a nice summery morning. We sat outside in the sun. When we finished the first cup of coffee, J & J wanted another one. They must have found it drinkable. I didn't think I could or should drink another double espresso, so I ordered myself a glass of white Sancerre wine instead. For me, it was apéritif time, after all. 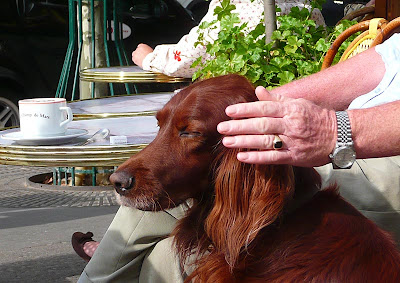 This red dog came and said bonjour to us as we sipped our coffee.
It's nice that you can still see dogs and cats in French cafés.
I was thinking about lunch. I wanted to take J & J to the Bouillon Chartier, the old Paris institution where people line up for hit-or-miss food, get seated by gruff waiters at tables they often have to share with strangers, and then soak up a 19th-century atmosphere in a big room that doesn't seem to have been modified or modernized in more than a century. More about that tomorrow...
Posted by Ken Broadhurst at 08:41