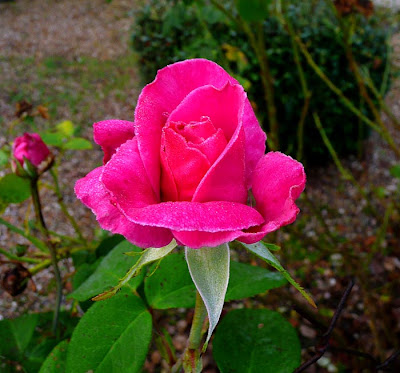 One of the last roses of the season
I haven't yet finished posting the pictures I took in Paris, but now that I'm feeling better and am walking the dog again, I'm also taking more pictures I want to post. It's hard to believe that I went for three weeks without taking a walk in the vineyard — one busy week, and two sick weeks. 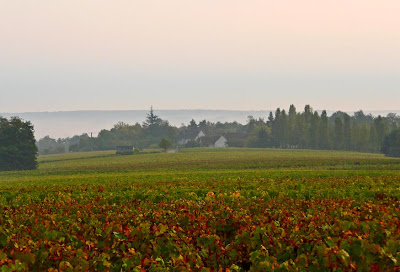 Looking across the vineyard this morning
toward our house at La Renaudière
It's also hard to believe that the season changed so quickly. It was summer (we didn have a month of good weather, including the first three weeks of September) and now it is definitely fall. The mornings are chilly, especially the sunny ones. Yesterday and today have been sunny again, after a couple of weeks of gray, damp, but warm weather. 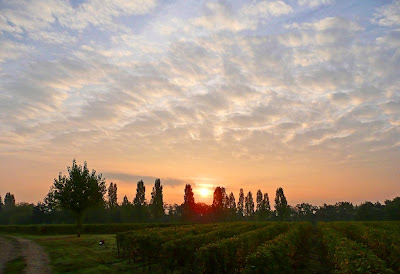 Sunrise at La Renaudière, 08 October 2007
The sun comes up after 8:00 right now. Today I slept until about 8:00 and then took the dog out for a walk. I got to watch the sun come up, and take some pictures. There was a heavy dew, so the dog and I were both had wet feet by the time we got back home. 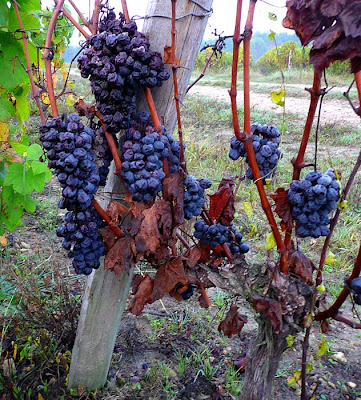 Autumn grapes
There are still some grapes in the vineyard. Some are black, some white, but all of them are now mostly shriveled. Some of the white ones are covered in mold, which might be the "noble rot" that turns Chenin Blanc grapes into the high-sugar fruit used to make moelleux wines — wines we would call "sweet" in English. 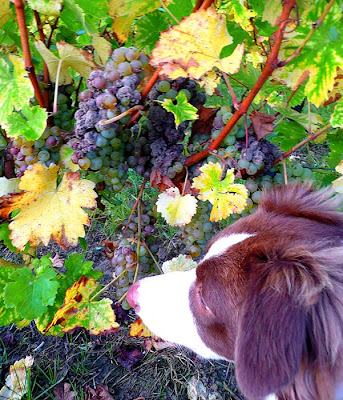 Callie and me inspecting some very ripe wine grapes
Wineries around Saint-Aignan make late-harvest vins doux or moelleux in good years, when the fall weather doesn't turn too rainy and the grapes have a chance to mature. The sweet whites are a specialty of the Vouvray appellation, 35 miles west of here. 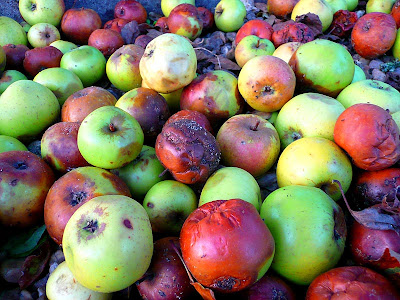 Fallen apples
The apples have nearly all fallen now, at least the ones produced by our trees. Our summertime neighbors were here yesterday, picking the last good apples on the trees in their little orchard. Walt made an apple cake with ours yesterday. 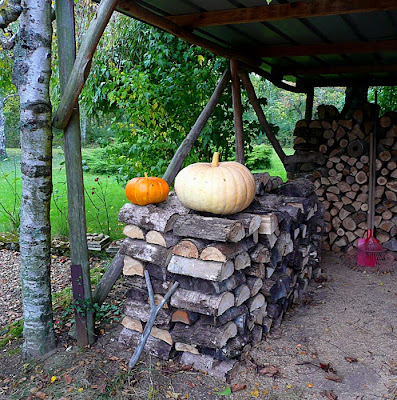 Pumpkin season
The most successful crops we grew in our vegetable garden this year were the squashes, including pumpkins. We had quite a few green and yellow summer squash too. There are two kinds of pumpkins ready to bring in now, big whitish ones and smaller bright orange ones. 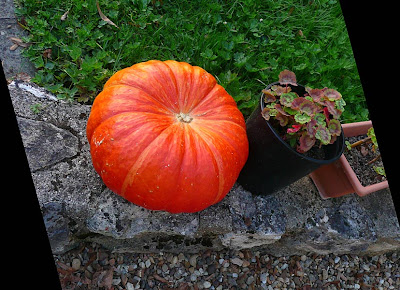 Very orange
I took the neighbors one of these little orange pumpkins yesterday afternoon. They're the neighbors who live in Blois and have the old house across the street from us as a summer and weekend place. They themselves don't eat pumpkins — they say they can't stomach them after having had only pumpkins to eat during World War II — but I know their oldest daughter likes them. She lives in Blois too, and I asked them to take the pumpkin to her. I bet she makes soup out of it, which is one of the things we're planning to do with ours. Artichokes in flower
We let our few artichokes go to flower this year. We just put the plants in the ground last spring, and they are supposed to survive the winter. We hope to get a bigger crop next year and to actually enjoy eating artichokes from our own garden next summer. 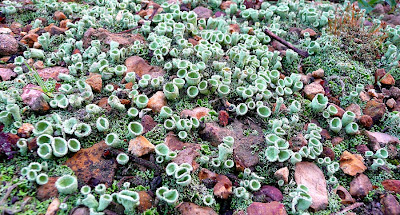 Vineyard plants
Walking down a row of vines this morning, I looked down and noticed these little plants growing on the ground. I have no idea what they are. I wonder if the little cup-shaped parts are flowers.
Posted by Ken Broadhurst at 10:25