The situation this morning

One the radio a few minutes ago, a reporter said there are about 6,000 people who commute to work daily from Orléans to Paris and back. Normally, there are 10 trains in the morning, and as many coming back in the evening. This morning there were two. 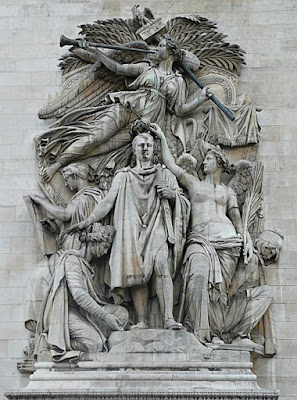 Some pictures I took at the Arc de Triomphe in September.
This high-relief sculpture is called « Triomphe de 1810 ».
The reporter said a lot of people had arrived early at the train station in the north suburbs of Orléans to try to get a train. A lot of them had come by bicycle, thinking they might need their bikes in Paris if they got there. 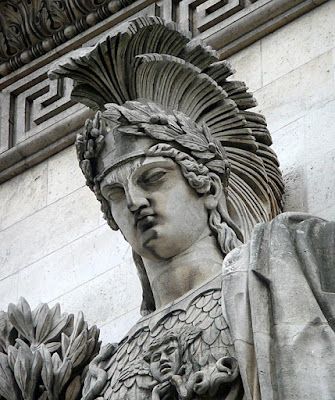 Detail of « La Paix »
When I rode the train from Paris to Saint-Aignan one evening in September, the train made a stop at that station, which is called Les Aubrais. A group of about a dozen people, aged 25 to 40 I would say, were sitting together and engaged in lively conversation. They joked and laughed with each other, and were obviously really enjoying each others' company. Then they all got off the train together. They must have been some of the 6,000 people who live in Orléans, work in Paris, and commute by train. 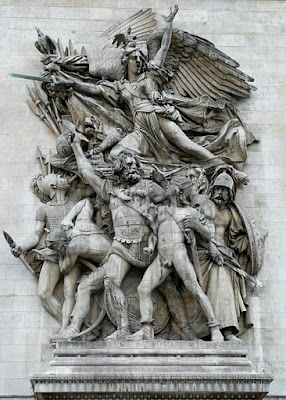 « Départ des Volontaires en 1792 »
(also known as « La Marseillaise »)
Radio reports say there are no regional trains at all running today in many areas, including around Lyons and in Normandy. The A and B lines of the RER « n'ont pas démarré », according to France Inter radio — they didn't start up this morning. That means no RER trains at all are running between CDG airport in Roissy and central Paris, or on what used to be called the Ligne de Sceaux. Also, none are running across Paris east-west out to La Défense, where tens of thousands work, and to the eastern suburbs. 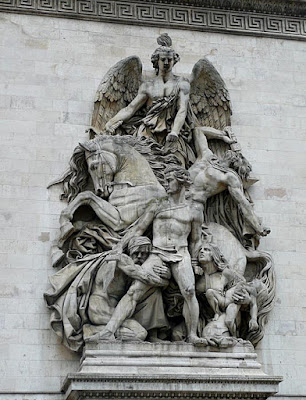 « La Résistance »
It's still early and details are just coming in. Car traffic around La Défense and on the expressways between Roissy and Paris is fairly normal, they said on the radio. I think a lot of people have decided not to drive today. A couple of years ago my mother was here and we went to Paris by car. It was a day when there was a big strike and the city turned out to be quiet and fairly empty, not choked with cars. We were able to drive all around and find parking with not a problem that day. You just never know. 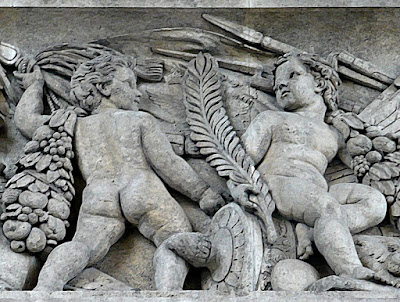 A couple of cherubs
I just heard that trains are running on 10 metro lines in Paris, but in reduced numbers. When you think that hundreds of thousands of passengers ride the metro every day, you can imagine how crowded those few trains that are running will be.

The only TGV train of the morning from Marseilles to Paris left at 7:31 a.m., the radio says. It had exactly 27 passengers on it. I guess people who would otherwise have gone to Paris today changed their minds, given the transit situation in the capital. 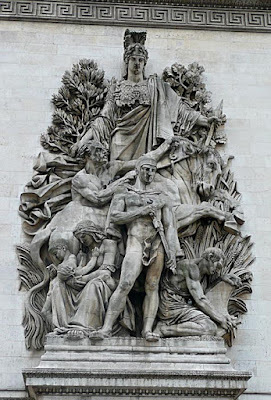 « La Paix »
Meanwhile, Nicolas and Cécilia Sarkozy have started divorce proceedings. She went to court Monday night, they say, to talk to a family law judge. The judge went to see Nicolas Sarkozy at the Elysée Palace on Tuesday. If they go through with it, this will be the first time a French president has gotten a divorce while in office. 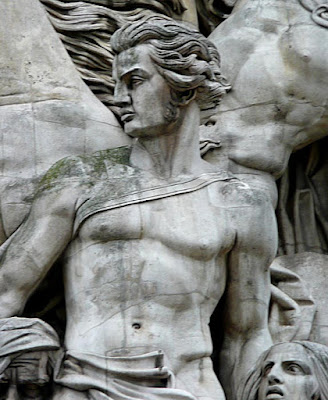 Detail of « La Résistance »
Years ago, President François Mitterrand, who was in office from 1981 to 1995, lived separately from his wife Danielle and had a long-term relationship and a child with another woman. Many in the press knew about the Mitterrands back then, but it was never made public. People's private lives are rigidly protected in France, even by the press. Or they were. The first the public knew about Mitterrand's second family was when his "illegitimate" daughter was seen among the other mourners at his funeral.

The Sarkozys seem to have chosen a less secretive way of doing things. Some would say they are being less hypocritical about their family life.
Posted by Ken Broadhurst at 07:34