Yesterday I realized I had a bag of little red potatoes of the variety called Roseline (a variant of the Roseval type) that I needed to cook. They were big enough that they were easy to peel. I had cooked some of them before so I knew they were the firm, waxy, not-too-starchy kind of potatoes I needed to make what is sometimes called a Gratin Dauphinois.

A gratin is a dish that is cooked in the oven until it develops a nice golden crust on top. It's often topped with cheese, but not always. In the case of the Gratin Dauphinois, a standard French potato dish, the recipe comes from the Dauphiné area around Grenoble in the Alps, where milk and what we call Swiss cheeses — Gruyère, Emmental, Comté, and Beaufort — are plentiful. (Purists will tell you that you shouldn't put in any cheese at all or, if you do, call the dish a Gratin Savoyard.) 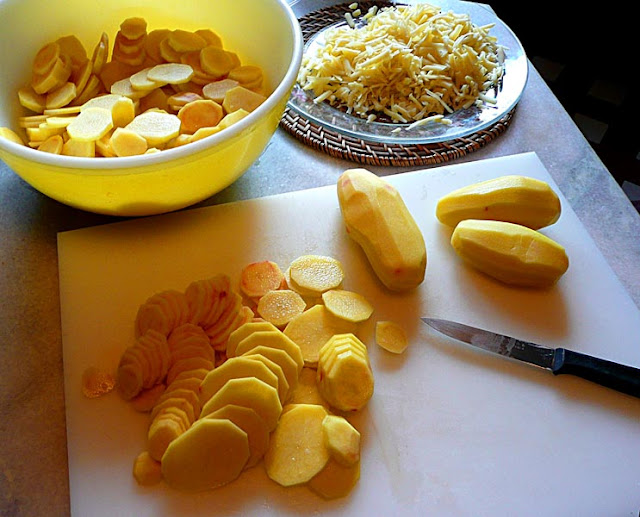 Peel and slice some potatoes. Grate some cheese.

To make a gratin like this, you take about a kilogram of potatoes, peel them, and wash them. Then cut them into pretty thin slices. The French recipes in books I have, depending on when they were published, say to cut slices of the thickness of a two-franc or five-franc coin. That might not help you much. What you want is slices that are thin but not paper-thin. You don't need to wash the slices, but you can if you want. Some people say not to wash them because the residual starch will thicken up the milk you are going to cook them in. 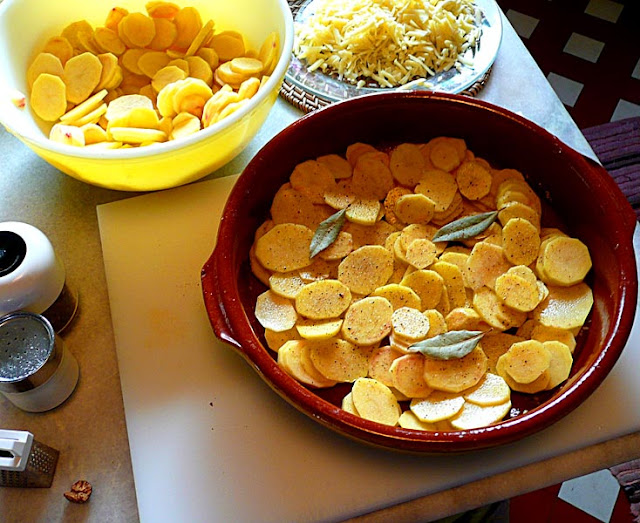 Layer potatoes in a baking dish and season with salt,
pepper, and nutmeg. Add some bay leaves if you want, and
then, optionally, put on a layer of grated Swiss-type cheese.

Rub an earthenware baking dish with a cut piece of garlic, or mash a small garlic clove and put it in the bottom of the pan with some melted butter or vegetable oil. Separately, put about three cups of milk on to simmer but don't let it boil. You can use skim or whole milk, or even half-and-half. Or a mixture of milk and cream. Start making layers of potatoes and (if using) cheese in the dish. 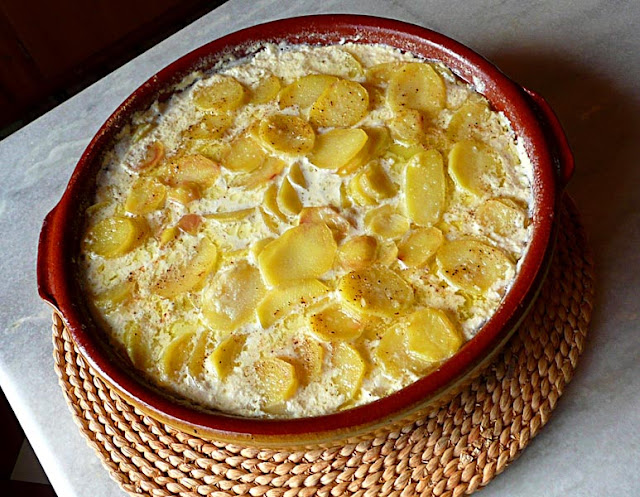 This just finished its first cooking in the microwave. 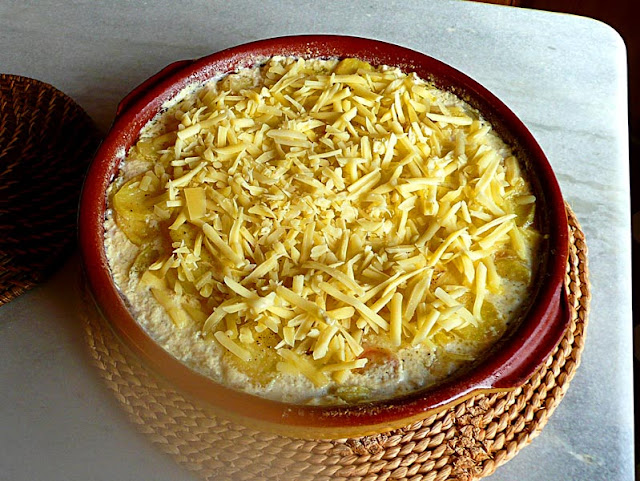 Add on the top layer of cheese before
baking the dish for an hour or more.

When the potatoes and cheese are layered in the dish, pour the hot milk into the pan. You should have just enough to cover the potatoes, so that the top slices are just barely covered. Cover the dish with a lid or with plastic wrap and put it in the microwave on medium for 20 minutes or so to give the cooking process a quick start.

Meanwhile, preheat the oven to 350ºF (180ºC). Take the dish of potatoes out of the microwave, uncover it, and , if you want, layer on enough grated cheese to cover the top. Put the dish in the preheated oven and let it cook for at least 60 minutes, and preferably 90. Watch it and if the top starts to brown too much, keep lowering the oven temperature. Cover it with foil or a lid if necessary. You want the potatoes completely cooked, of course, and you want pretty much all of the liquid to evaporate. 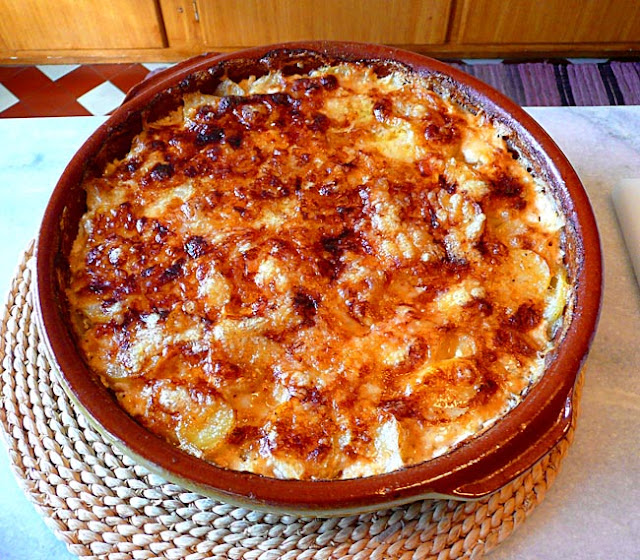 Be sure to let the dish rest outside the oven for 10 or 15 minutes before you eat it so that you don't burn your tongue. With it, have roast chicken, a steak, a pork or lamb chop, or just a green salad. Bread and wine are not optional.
Posted by Ken Broadhurst at 09:03