Strike continues, and so does life

According to the news, yesterday was worse than Thursday for people who needed to get into and get around in Paris. Traffic jams around the Paris region were a lot worse. A lot of metro, RER, and bus lines were running only at very reduced rates or not at all. 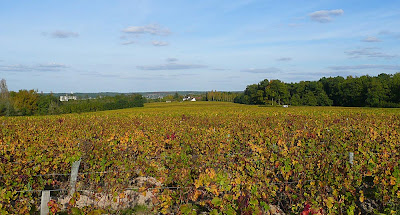 View across the vineyards in autumn toward La Renaudière
What happened on Thursday, I think, is that a lot of people decided it was going to be a fun day. They took the day off from work, kept their kids home from school, walked or rode bikes to get around in the nice weather, and made impromptu car-pool arrangements. It was kind of a lark for many, I'm sure. 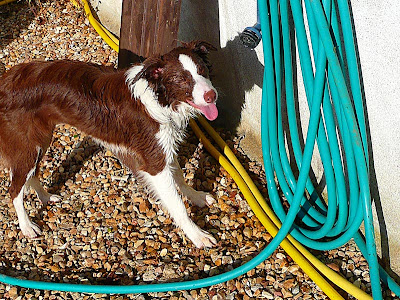 Callie hoping some more water might squirt out of the hose
Yesterday, Friday, was different. Everybody figured it was over and people tried to resume normal activities and routines. So big traffic tie-ups resulted from all those people who decided to drive on into Paris, with one person per vehicle. Problem was, too, that the unions didn't quite cooperate. And all the people who wanted to jump on trains, metros, and buses were caught off guard — the workers on some lines were still on strike. Reality set in, as it always does. 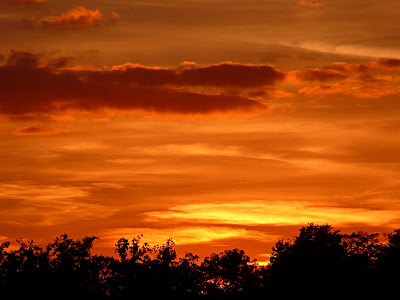 A close shot of that October 18 sunset at La Renaudière
Oh well. The reality here was hedge trimming and garden tilling. And working with Callie in the yard. Callie loves to chase and bark at wheelbarrows, lawnmowers, and rototillers. We are teaching her to sit quietly and ignore such distractions. Then I got out the garden hose, and found out she really likes to play in and with the spray of water that comes out the nozzle. 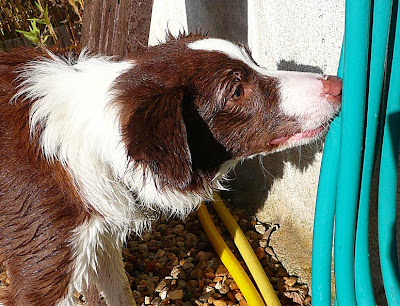 Enjoying the drops falling on her nose
I kind of knew about the dog's taste for playing in water. Twice she has taken us by surprise and jumped into ponds to paddle around a little bit. Then a few weeks ago I went out to wash down the car and she got interested in the hose spray. She snaps at it, trying to catch the water in her mouth. 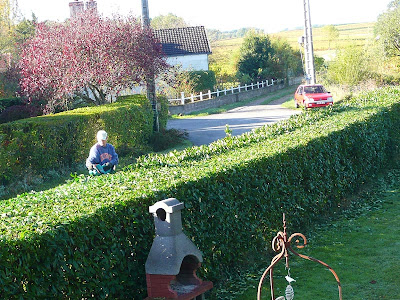 Walt trimming the long hedge
She ended up soaking wet the other day, but it didn't matter. The weather was warm and dry. And we were getting ready to go out for a long walk anyway. By the time we got home, she had had time to dry out.
Posted by Ken Broadhurst at 09:21