The Grande Arche de la Fraternité (or de la Défense) was inaugurated in 1989, the second bicentennial of the French Revolution. President Mitterrand was the sponsor of the architectural competition for the building, which was won by a Dane. Earlier presidents Pompidou and Giscard d'Estaing had considered plans for a great architectural monument at La Défense, but it was finally Mitterrand who oversaw the project. 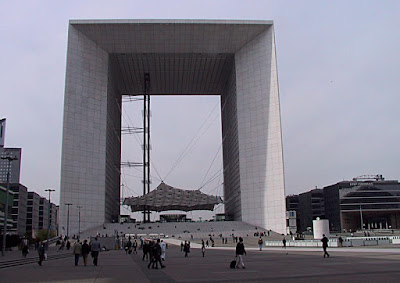 The architect saw his work as a 20th century version of the old Arc de Triomphe, and it stands as an extension of the historic axis of Paris that runs from the Louvre, through the Place de la Concorde and its Egyptian obelisk, and up the Champs-Elysées to the Napoleonic triumphal arch. The Grande Arche is dedicated to humanitarian ideals rather than to military victories. 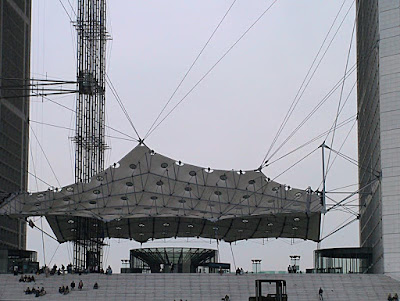 The Arche is in part an office building. Several government ministries, including Transportation and and Tourisme, have their offices there. On the top floor, there's a computer sciences museum, a convention center, a restaurant, and an observation deck open to the public. The building's elevators are cabins made almost entirely of glass that run on the outside of the building in the center space. 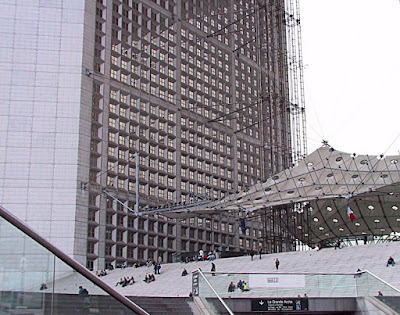 Walt told me I should point out that La Défense is not just a centre d'affaires (a business park) but it is also home to some 20,000 residents. Before construction on the modern complex started more than 40 years ago, about 25,000 people who lived in what was mostly an industrial area were displaced. 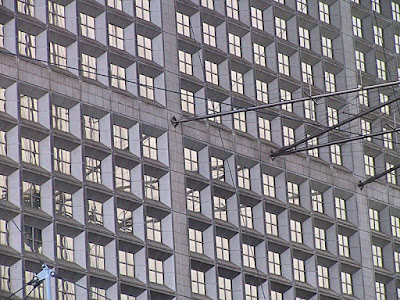 Last year, friends of ours said they wouldn't mind seeing La Défense, because they had been to Paris many times without ever venturing out there. We had our car in the city that day, so we drove out. That was a mistake. First of all, there was a lot of traffic on the road from the Porte Maillot out to La Défense, so that turned into a slog. 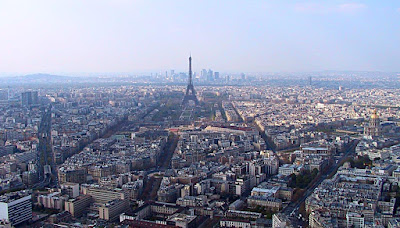 La Défense in the distance behind the Eiffel Tower
And then you can't really see anything interesting at La Défense (assuming you think there is anything interesting there to see) from the car. You really need to be on foot out on the vast esplanade surrounded by tall, futuristic buildings and the Grande Arche to get an idea of what the place is really all about.
Posted by Ken Broadhurst at 09:29