The transit strike yesterday was a big success as far as the labor unions are concerned. More workers actually walked off the job than back in the big strikes of 1995, which paralyzed the country for several days. Yesterday in France, few trains ran as scheduled, and metro and bus traffic in Paris was much reduced. Some workers and unions voted to stay off the job again today, but I think the situation will be returning to normal now. 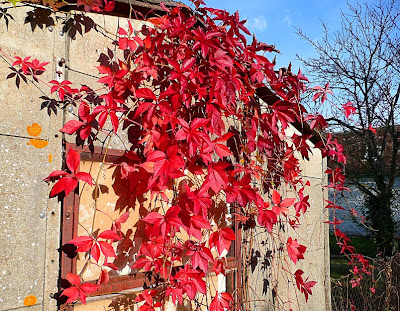 Fall colors at La Renaudière
From the public's point of view, the strike was less disruptive than feared. There were traffic jams around Paris, but they weren't paralyzing. There was a lot of carpooling, the news reported. The weather was beautiful, so people who didn't just take the day off were able to get around the city on foot or on bicycles. The overall assessment on the news was that the day didn't turn into the "Black Thursday" it might have. 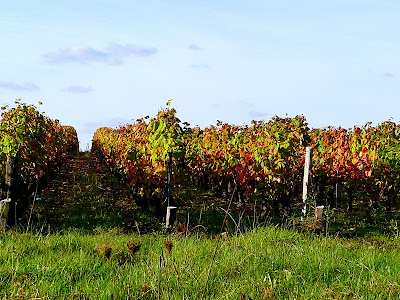 The Touraine vines in autumn
On the evening news, I heard that there are at total of 27,000 of the new "public bicycles" in Paris under the Vélib' — a contraction of vélo (bike) and liberté — program. They were in demand, and there were some problems with lots being empty when somebody wanted a bike, or even completely full when somebody wanted to turn one in. It's all automated, with no attendants, and you have to find a post where you can lock up the bike and make sure it is properly checked in, using your credit card. If not, you are liable for its disappearance, I imagine. 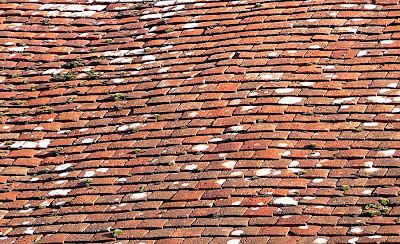 The neighbors' roof tiles
The other big news of the day is that President Nicolas Sarkozy and Cécilia Sarkozy are now divorced. The divorce was pronounced Monday, and it was by mutual consent. History has been made.

For us in Saint-Aignan, the transit strike and the marital affairs of the first couple didn't have much effect on our everyday lives. As Walt has written on his blog, he has been busy with the job of trimming the long, tall, and wide hedge that surrounds our property on two sides. It has to be trimmed once a year, in the autumn. As for me, I've been busy in the vegetable garden, cleaning up the remains of a crummy season. 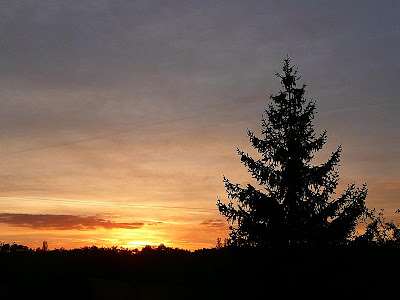 Sunset at La Renaudière, 18 October 2007
We have four vegetable garden plots, each about 15 x 15 feet, plus a small pumpkin patch. That doesn't sound like much ground, but believe me it is when it comes time to turn the soil. We invested in a rototiller a few years ago, and without it we wouldn't be able to have a garden as big as the one we've got. 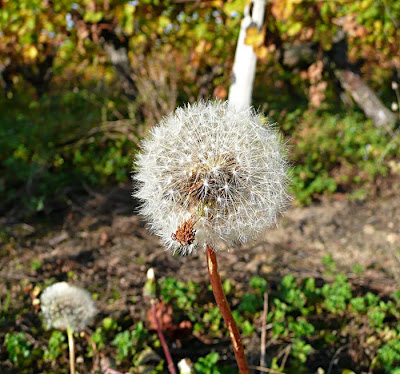 Weeds
The rototiller is a heavy piece of equipment and it takes a lot of strength and stamina to pull it around and get the ground plowed up. That's especially true when weeds and grasses with long, strong roots have taken over the space, as they have this year. I managed to get two of the garden plots and the pumpkin patch tilled up yesterday afternoon. I'll get the third one done before I leave on my U.S. trip. The fourth plot, the herb garden, has to be done by hand, because some of the plants in it are perennials. Walt takes care of that. 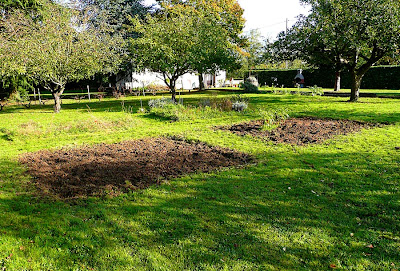 Two garden plots all tilled up (well, except for two bell pepper
plants with peppers on them still growing in one of the plots)
Callie chased the rototiller around barking at it, and then really enjoyed playing in and with the water when I got out the garden hose to wash the machine down before putting it back in the shed. I'll have some pictures of that tomorrow. 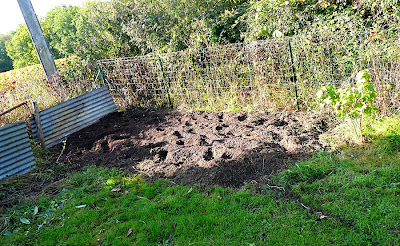 This morning I went out for a walk in the vineyard with Callie between 8:00 and 9:00. The sun was just coming up and the temperature was about 38ºF/4ºC. Milestone: there was frost on the ground for the first time this season. Brrr.
Posted by Ken Broadhurst at 09:27