Over by La Madeleine

I went out today. It was just a trip to Intermarché to buy some groceries. But it was the first time I had been in the car since the Saturday two weeks ago when I drove back from Paris. That day, I came home in the rain, and it has been gray, damp, and rainy in Saint-Aignan ever since. 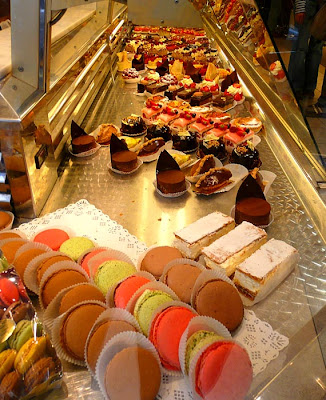 Here's a cheery picture to liven up
the gray, damp, rainy days.
In a comment on another posting, Claude of Blogging in Paris mentioned once having had une pneumonie ambulatoire. Well, I also once had what we call "walking pneumonia." Maybe that's what I had again this time. My only symptoms were a tickling sensation down in my chest and a dry cough for days on end. No sore throat. No head cold. Just a low-grade fever for a few days. Now I'm better, though not yet fully recovered. 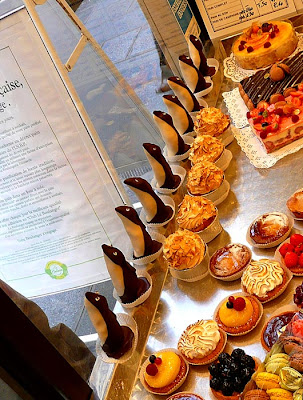 The chocolate penguins are nice.
Or are they frogs? I can't tell.
In my posting about the restaurant Chartier, I mentioned that I thought the waiter might not have realized that I was a foreigner. He was pretty gruff — not rude, but not pleasant either. When I say he might not have realized I was a foreigner, I'm saying at least as much about people in Paris as I'm saying about my own spoken French. Not being recognized immediately as a foreigner is something that has been happening to me in Paris for 30 years.

Often, Parisians are just not paying attention. They are too busy, in too much of a hurry. They also are used to frequent contact and dealings with foreigners who speak French to one degree of fluency or another. If your French is pretty good, they don't pay attention; they just get the facts and get their business done. 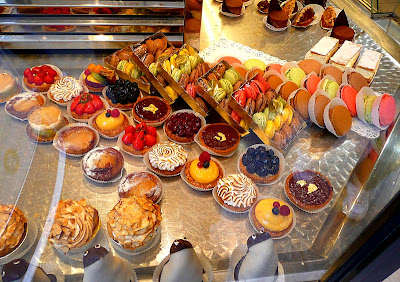 Little cakes and pies, and big macaroons
In Saint-Aignan, however, the local people take one look at me and they know immediately that I'm not French. I don't even have to open my mouth. They think I'm British, of course; it doesn't occur to them that an American might live here (or even less that an American might speak French). They all say they hear my Anglo-Saxon accent, and I'm sure they do. Je n'y peux rien — there's nothing I can do about that. Most of them have never before encountered a foreigner who actually spoke French, so they hear the accent loud and clear.

I was very used to Paris, where I could "pass" as a French-speaking person. Whether people thought I was Belgian, Alsatian, or Swiss, I don't know — they probably knew I had some kind of accent, but they didn't assume I wasn't a francophone. When I came to Saint-Aignan I was kind of shocked that I was identified as a foreigner as soon as I came into view, and as an anglophone as soon as I started talking, whether in person or on the telephone. I'm used to it now. 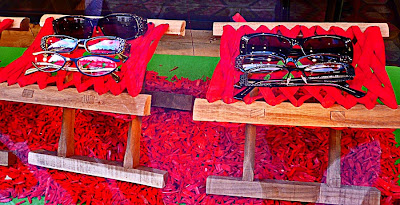 Eyeglasses chez Louis Lafont
So here I am still writing about a trip to Paris that ended two weeks ago today. After lunch chez Chartier and the walk past Opéra down toward La Madeleine and a stop in the so-called outlet store, where prices were sky-high, we got serious. Janice was on a mission. She wanted to go to the optical shop called (Louis) Lafont. There were actually two Lafont shops near Place de la Madeleine: one on the north side of the Boulevard des Capucines, and the other down on the Rue Saint-Honoré. We went to both. 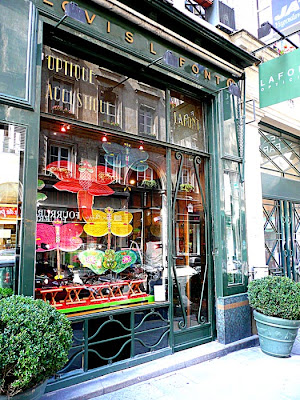 Louis Lafont, optique et acoustique
In the first Lafont boutique, there was a nice young woman clerk who spoke pretty good English and who was able to talk to Janice and Joanna about the business. I stayed outside taking pictures for a few minutes, and then went in and just observed their interactions. It was nice. We walked by the other store, down on the classy Rue Saint-Honoré, but J & J didn't even want to go inside. They had seen. 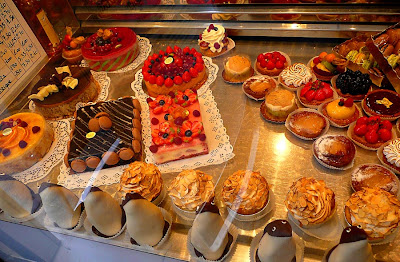 Had enough yet?
We were also looking for a perfume shop at 422, rue Saint-Honoré, but it turned out to be just a doorway with a perfume company's sign next to it. Corporate headquarters, but no boutique. So Joanna was not able to get the perfume her daughter wanted from Paris. We couldn't find it anywhere.

The pâtisserie where I took the pictures included in this post was the shop next door. I didn't get the name of the shop, and I can't find it on the French yellow pages site. I think it's a new shop and not yet listed. It's at either 422 or 424, rue Saint-Honoré. You might want to stop there for some of those big macarons if you're in the neighborhood (Place de la Concorde or Place de la Madeleine, for example). 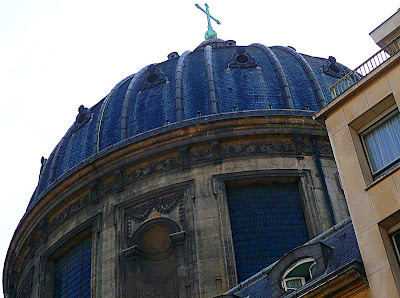 Just across the street from Lafont's boutique and the pâtisserie was the dome of the chapel called Notre-Dame de l'Assomption. Before the French Revolution, it was part of a convent, but the rest of the buildings were torn down during the 1790s. The chapel was spared, and it was here that funeral services for Lafayette (of Revolutionary War fame) were held in 1834. The novelist Stendahl's funeral was held here too, in 1842. The dome is completely oversized and out of proportion with the chapel it sits on top of; evidently, Parisians called it the Sot dôme, the "silly dome," after it was completed in 1676.

Also nearby was the house that the revolutionary figure Maximilien Robespierre lived in for the last years of his life. 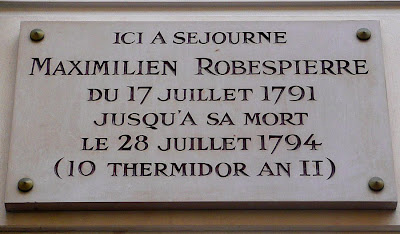 Plaque commemorating Robespierre's last Paris residence
The inscription on the plaque says "In this house Maximilen Robespierre lived from 17 July 1791 until his death on 28 July 1974 (10 Thermidor, Year II)." That was year two of the revolutionary period. He was guillotined, like so many others. 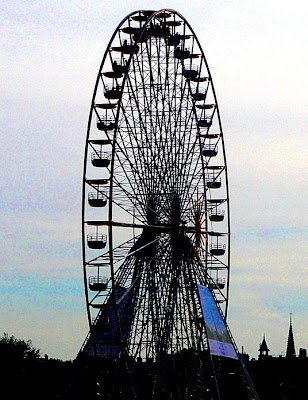