We were sitting in the sun at the café du Champ de Mars and I was thinking about lunch. We had at least two choices — and in Paris you all know there are many more lunch choices than that — we could stay right where we were and order some lunch there. Or we could get outselves over to the Bouillon Chartier, not far from the Opéra on what are called the Grands Boulevards. I was still leaning toward that option, because Chartier is such a typically Parisian institution. I wanted Joanna and Janice to see it. 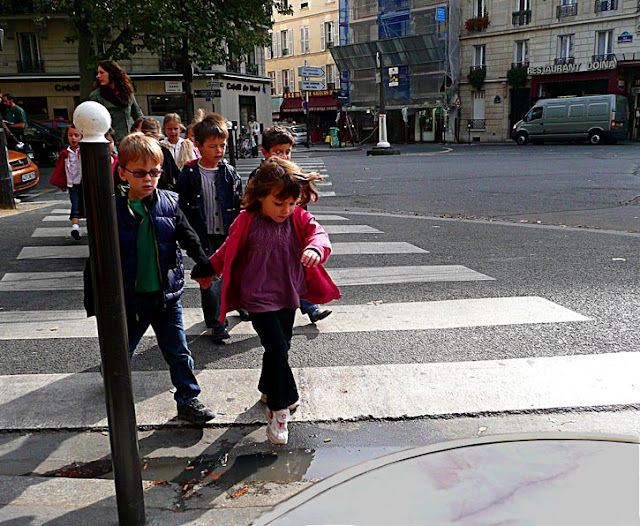 Here are some more of those children jumping over a puddle
in front of the café du Champ de Mars. J & J, the opticians,
noticed only one kid in the entire class was wearing glasses

I had forgotten to bring a metro or bus map with me. I kept watching big green RATP buses go by, trying to see from the list of stops on their sides if one of them with a stop near the Champ de Mars would get us over to the Grands Boulevards. 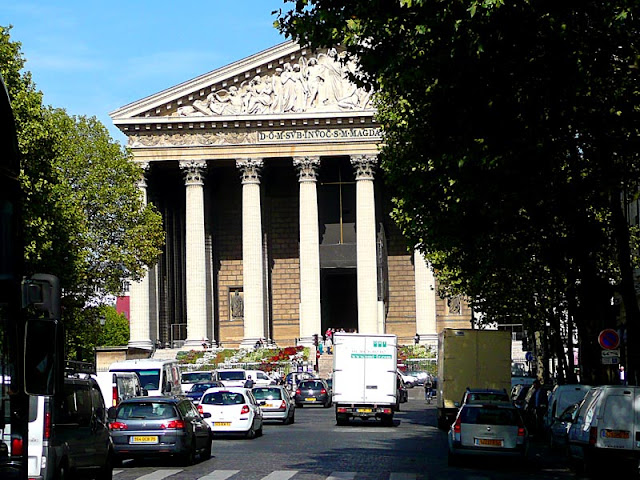 Then I had a brilliant idea: I'll ask a waitress or waiter. The young woman who had brought our coffees and wines showed up at just that moment. "Do you know if there's a bus here that will take us over toward La Madeleine?" I asked her. Madeleine is where the boulevards start, and we wanted to go there later in the afternoon anyway. 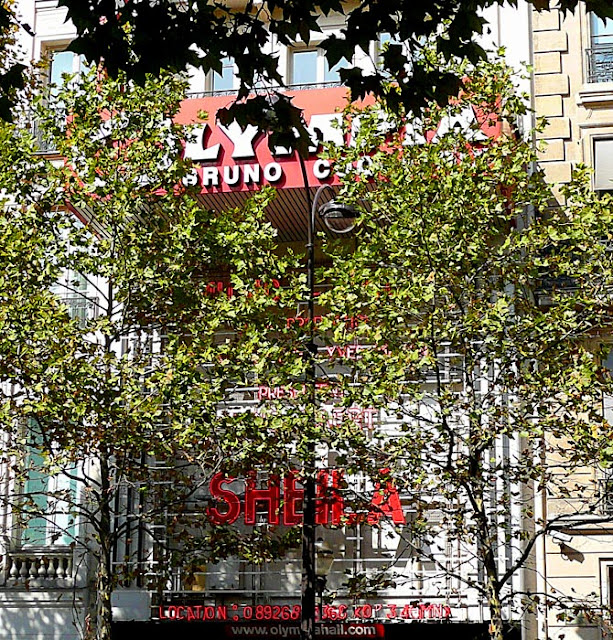 The 1960s-era pop singer Sheila was giving a concert at
the Olympia music hall, which was along the 42 bus route. 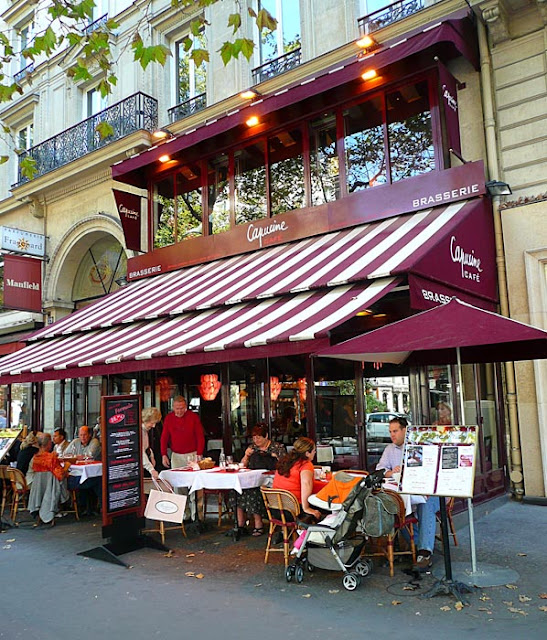 I noticed that the restaurant Capucine, across the
street from L' Olympia, is sporting a new look. Walt and
I have enjoyed meals there several times in the past.

That decided the question. We finished our consommations and walked across the avenue to the bus stop. The next 42 bus showed up within two or three minutes. The ride took us up the Avenue de la Bourdonnais to the river, then across the Seine over the Pont de l'Alma, up to the Champs-Elysées, down to the Place de la Concorde, and on to Madeleine and Opéra. 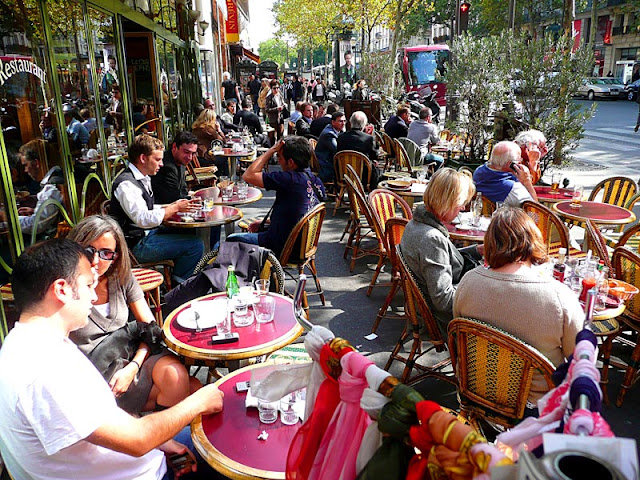 Crowds were out in the cafés on the Grands Boulevards.

As we headed up the Rue Royale toward La Madeleine, Joanna and Janice started naming all the fashion designer's boutiques they were seeing along the street and wishing they could stop and look in the windows. They are both opticians, and they were very interested in the latest eyeglass frames available in France. All the big designers now have a line of frames, they told me. I told them that we would return to this neighborhood after lunch. 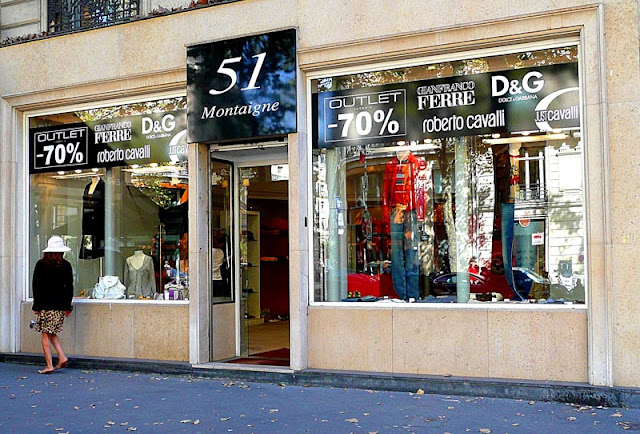 I promised we would return to this "outlet store" after lunch.

The bus let us off on the Rue Lafayette at the stop called Cadet. We walked through the Rue Cadet, a pedestrian street lined with all kinds of little grocery stores, bakeries, beauty parlors, and clothing stores. The narrow street itself was under construction, so we had to be careful where we stepped. The atmosphere was suddenly very different from the calm, wide boulevards and sidewalks around Madeleine and Opéra, which are lined with designer boutiques. 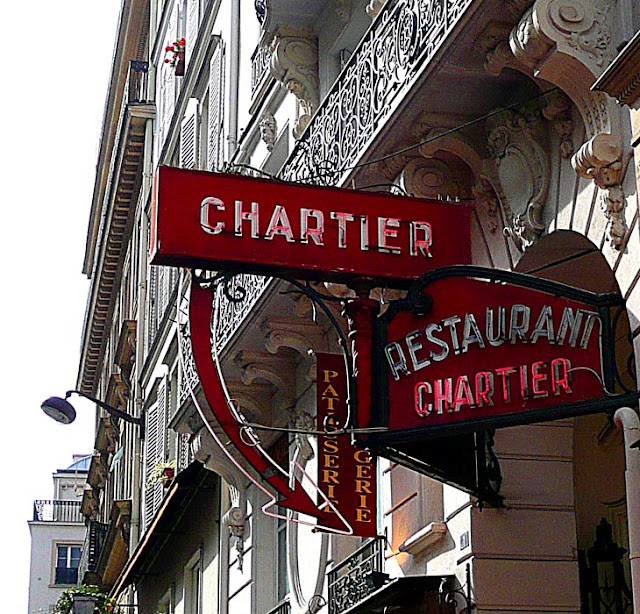 Arriving at Chartier on the Rue du Faubourg-Montmartre

We arrived at Chartier early enough for lunch that there wasn't a long line to get in. The restaurant is popular and doesn't take reservations. We were shown right in and were seated at a table for four in the back of the restaurant. A gruff waiter with a big bushy mustache brought our menus as soon as we were seated. You can see today's menu at Chartier on this site. 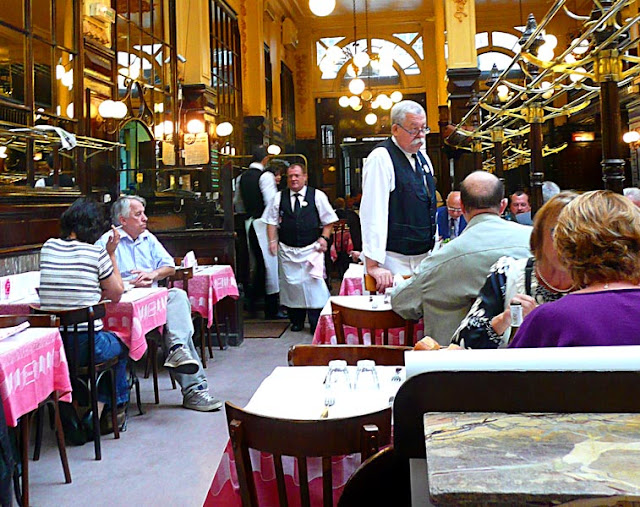 Our gruff waiter, the one with the walrus mustache

One advantage of taking people who don't know French food to Chartier is that they can order anything they want off the menu in whatever order they want it. They aren't required to order a main course; they can have a combination of several starters and side dishes if they want. That's what happened with us.

Joanna ordered a poulet fermier rôti pommes frites (farm-raised roast chicken with fries, €8.70) and no starter. The waiter didn't have a problem with that. Janice ordered a salade verte mélangée (a mixed green salad, €2.20) and a plate of spaghetti with tomato sauce (a side dish listed as pâtes sauce tomate, €2.50) with no main course. The waiter didn't flinch. In many French restaurants, you would be told in no uncertain terms that you had not yet finished ordering your meal. 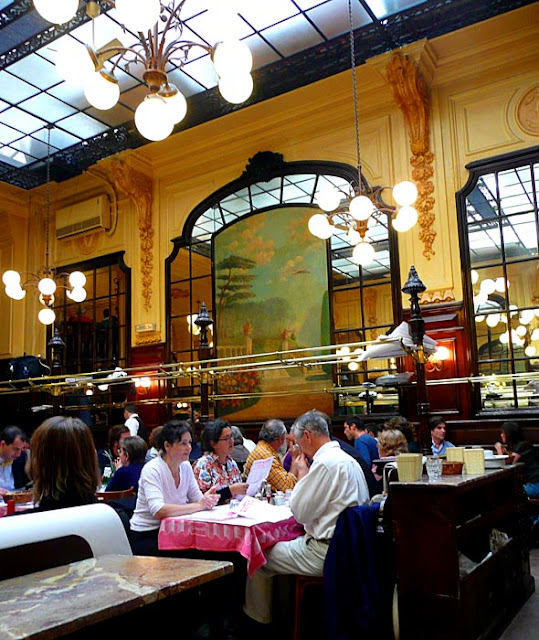 I followed meal conventions and ordered a starter (une salade frisée aux lardons — a curly endive salad with bacon, €3.50) and a main course (rosbif froid à la mayonnaise, probably about €8.00). I really wanted escalope normande (veal scaloppini in a cream sauce), but it came with boiled potatoes instead of pommes frites so I decided not to.

Not that the rosbif came with frites — but never mind. I think the reason I didn't order the veal was because when I asked the waiter if it was served with fries, he gruffly answered "No, boiled potatoes!" as if I had asked a stupid question. The rosbif came with salade macédoine (cold mixed vegetables in a mayonnaise dressing), which I like. 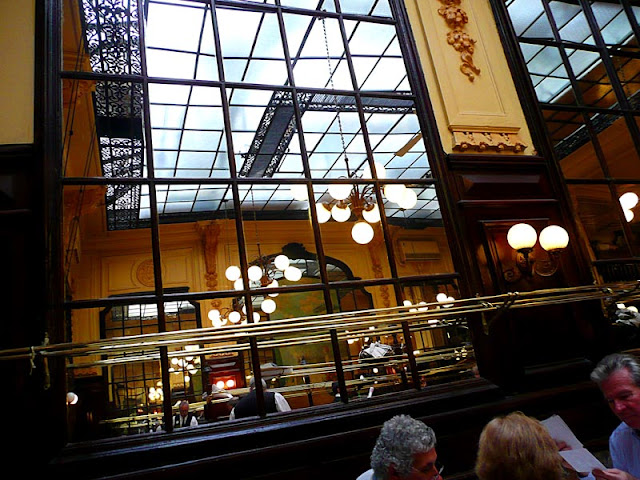 The old restaurant has a glass ceiling and mirrored walls.

Then came the trouble: beverages. It's often an issue. Basically, in a French restaurant, you have two choices: wine or water. But many Americans want something else. Joanna wanted a 7-Up. Over the week she was here, we never found a restaurant that served 7-Up, even though you can buy it in the grocery stores. I asked the waiter if he had it, and he said no, we have Coca-Cola. Do you have limonade? I asked. No, no limonade.

Limonade is a French soft drink that resembles 7-Up or Sprite. The Robert dictionary says limonade is a « boisson gazeuse (eau gazéifiée) légèrement sucrée et parfumée au citron » — a carbonated drink lightly sweetened and flavored with lemon. It must not be very lemony, because Joanna said it was much better when they put a slice of lemon, une rondelle de citron, in the glass to perk it up.

But there was no limonade chez Chartier. So Joanna said she would have coffee. I ordered her a café allongé. « Le café se boit au petit déjeuner, pas avec les repas, vous savez, » said the helpful waiter. Coffee is something you drink at breakfast, not at lunch or dinner. « Je n'y peux rien, » I told him, gruffly. There's nothing I can do about that. 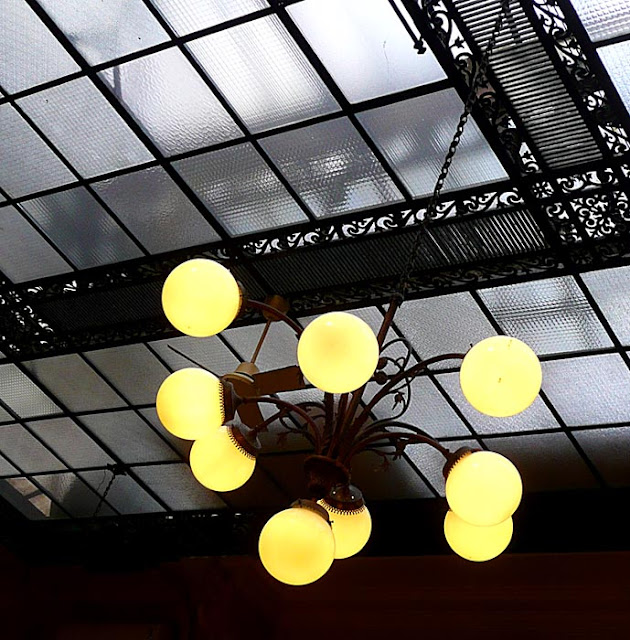 I don't remember what Janice ordered to drink — maybe just water — I ordered wine of course. A small carafe of red wine. She shared it with me.

The food was just fine. I asked Joanna if the chicken was hot — she had had roast chicken in a restaurant a week before and said it was good but basically cold. With French fries as an accompaniment, you'd expect it to be hot. It was the same this time — cold. She said it was good, though.

The rosbif was good but it was hard to cut with a table knife. It was a big, rare slice of meat about ¼" thick. The waiter obviously noticed me struggling to cut it with a dull knife and took it upon himself to bring me a steak knife. « Je ne voudrais pas dire que la viande est dure, mais ce sera plus facile, » he said. I told him that the meat was good and not tough, and I thanked him for the knife. 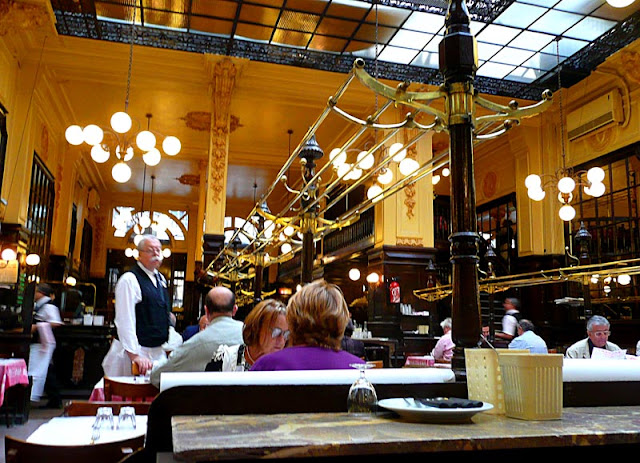 One more shot of our waiter and the restaurant's decor

Oh, Joanna's coffee came in a demi-tasse cup, with a little pitcher of hot water alongside. That made it pretty much impossible to turn the brew into a café allongé, but she made do. J & J had desserts — Janice had a citron glacé, which is a hollowed out lemon filled with a tart lemon sorbet. She said it was really good. Joanna had a chocolate-vanilla ice cream bar, which she said was good too. I think I just had an espresso.

When the waiter came to the table for us to pay the bill, I handed him my Bank of America Visa card. I could tell from the funny way he looked at me when he saw a U.S. credit card that he hadn't thought I was American. Once he realized was dealing with a foreigner, he smiled and was much more gracious. But the meal was over.
Posted by Ken Broadhurst at 07:42