The pull of Paris 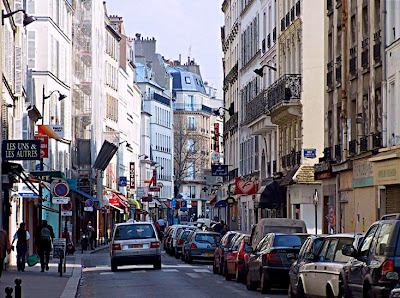 2002: Rue Saint-Dominque in the 7th arrondissement
The weather in Saint-Aignan has turned wintry. We had very few days last winter that were as cold as these days we're living through now. This morning, the temperature was below freezing. There was a lot of frost when I took the dog out at 8:15. 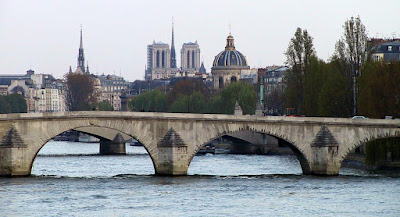 The Seine in the center of Paris. That's Notre Dame.
Next Saturday I'll be going to Paris again. It's funny, but we don't spend nearly as much time in Paris nowadays as we did when we still lived in California. Back then, between 1990 and 2003, we would often rent an apartment in Paris or a house in the French countryside and come spend two or even three weeks in France. 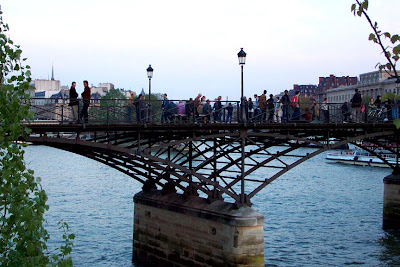 Walking across the Pont des Arts
Two weeks in Paris was perfect, usually. By the end of the two weeks, we would be ready to go back home to San Francisco, no matter how much we were enjoying Paris. We always left the dog back home with a sitter, so that was one reason we wanted to get back. And then San Francisco was home, and after a while I find I always get an urge to go home, no matter how much I'm enjoying what I'm doing, no matter where I am. 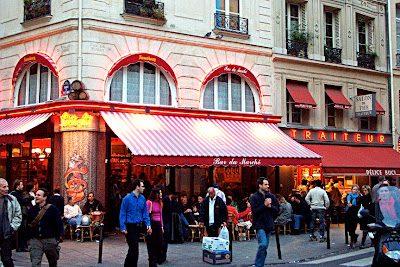 A café on the Rue de Buci in the 6th arrondissement
Nowadays, we go to Paris for a day or two now and then. The dollar has fallen so low against the euro that prices there, especially apartment rentals, are just too expensive for retired people like us. When the dollar was strong, even a fairly expensive vacation apartment in Paris might cost about $100 a night. Now you have to count paying on $200 a night. That's true even though there are many more vacation apartments available in Paris these days, and competition has kept rental prices from rising as fast as they might have. But the dollar is worth only half what it was worth in 2002! 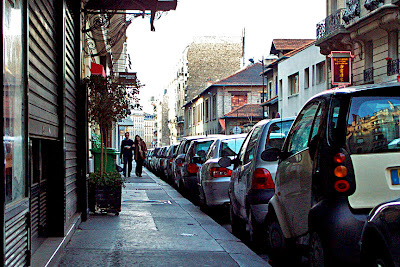 Typical Paris sidewalk scene
The other reason we don't spend as much time in Paris, of course, is that we are already in France. We have the food, the language, the beauty of the country's old monuments and buildings, and so much of what we always came here for, right here in Saint-Aignan. Paris doesn't pull at us the way it used to. 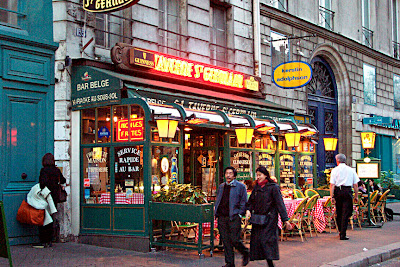 A tavern in the Saint-Germain-des-Prés neighborhood
It's still fun to go to the city. Last year, when our dog Collette died, the first thing we did was to rent an apartment and go spend a week in Paris. It was a good change of scenery at that point, and we walked all over the city for a week. It was certainly fun, but guess what? After a week, we were ready to come home. There was gardening work to do. We missed Saint-Aignan, the house, the yard and garden, the vineyards, the markets, and our kitchen. 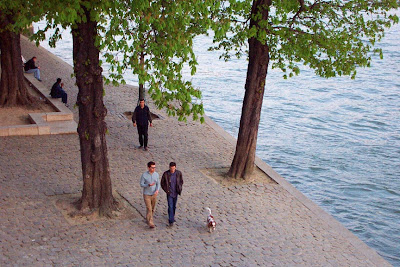 Two guys walking a dog along the Seine near the Louvre
Next Saturday I'll go to Paris and spend just 24 hours there before I fly off to the U.S. Saturday night I'll have dinner in a restaurant with some Internet acquantances. Sunday at noontime I'll get on a plane to go to Atlanta. I'm looking forward to the trip, to seeing friends and family, but I know I'll be glad to get back to Saint-Aignan when the time comes. 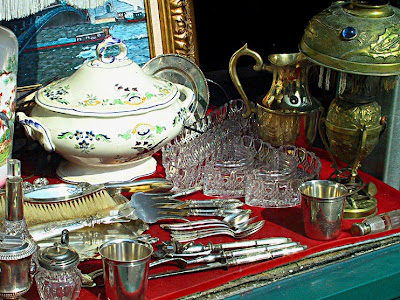 Window-shopping: an antique store on the Rue de Sèvres
The pictures in this post are ones I took in April 2002, the last time Walt and I spent two weeks in an apartment in Paris. That was the year we decided to look for a house to buy in France — but not in Paris. We were ready to move to the country. We found the house and actually moved here — lock, stock, and barrel (not to mention the dog) — in June 2003.
Posted by Ken Broadhurst at 09:36