Paris from the top of Eiffel's Tower 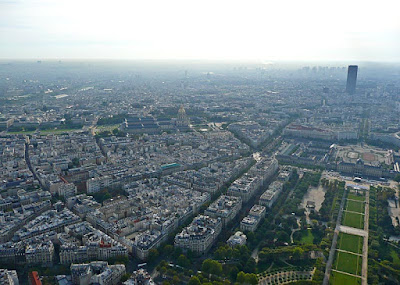 The hazy Left Bank of Paris
Click on the pictures to see them at full size.
Joanna and Janice have no way of knowing how lucky they were to have fine weather for nearly all of the week they spent in Paris and Saint-Aignan. It was even nice at the Mont Saint-Michel. The last day we spent in Paris, a Friday, was bright and sunny. The next day, I dropped J & J at the airport and drove back to Saint-Aignan alone under thick gray clouds, through a steady rain. It hasn't really stopped raining since then. 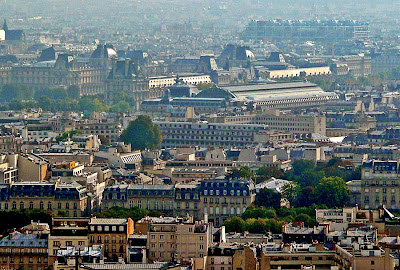 In this photo you can see the Orsay Museum,
the Louvre complex, and the Pompidou Center.
The forecast for today is for more rain, with scattered thunder showers. It rained for a good part of the day yesterday. The temperature is about 70F in the afternoon right now. It's very humid. This is the France I remember from the 1970s and 1980s, when I lived for several years in Paris, Rouen, and Metz : gray and damp. 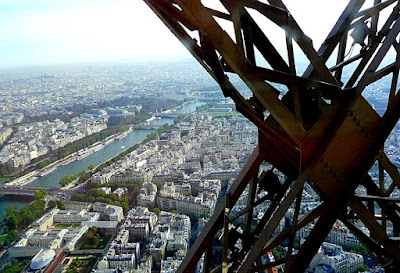 Looking east up the Seine toward the center of Paris, into the haze
Be that as it may, that last Friday of J & J's trip, we made it to the top of the Eiffel Tower in what I thought was record time. I don't remember looking at my watch, but I think we were on Level 3 before 10:00 a.m. 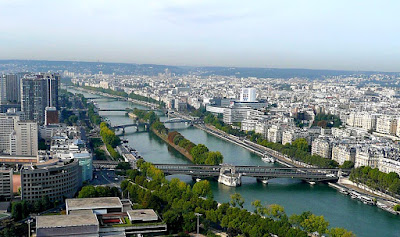 Looking west down the Seine and over the Allée des Cygnes
In 1997 I went to the top of the Eiffel Tower for the second time in my life (the first time was in 1970). Those ten years ago, my mother and my 15-year-old niece were in Paris with me and we decided to go to the top. The way I remember it, it took us about two hours of standing in long lines, in the middle of pushing-and-shoving crowds, to get there. It was mid-June and a nice day. It was worth it. 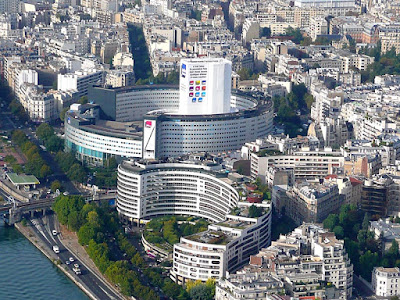 La Maison de Radio France in the 16th arrondissement
When you get out of the elevator up there at the top of the tower, you find yourself on a glassed-in observation deck. If you climb one flight of stairs, you emerge onto an outdoor deck where you can really enjoy the sensation of being high above the city. The other day we climbed on up, and it wasn't too cold though there was a chilly breeze blowing. 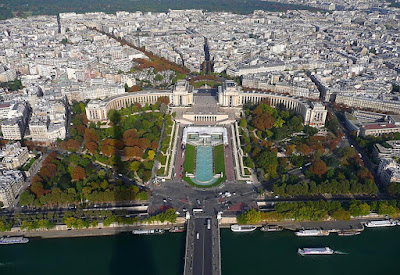 The Palais de Chaillot, with the shadow of the tower
My friend Claude of Blogging in Paris left a comment here a couple of days ago to say that although she has lived in Paris for decades, she has never been to the top of the tower. And for a good reason: fear of heights. It was interesting to me the other day to see a number of people who, after having made the trip to the top, could not bring themselves to approach the edge of the outdoor observation deck. I saw several who cautiously walked around the deck with their backs to the inner wall, as far from the edge as possible, and with a look of fear in their eyes. 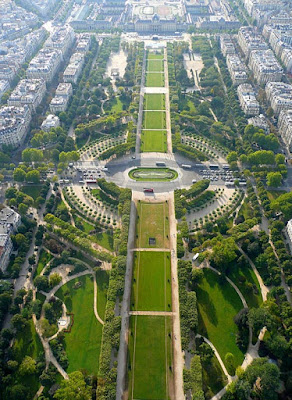 Le Champ de Mars parade grounds
and the Ecole Militaire
I remember the same thing from 10 years ago. Logically, there is no way you could fall off. There's not only a railing but also a high, heavy-gauge wire fence to prevent any accidents. But we are not talking about logic. 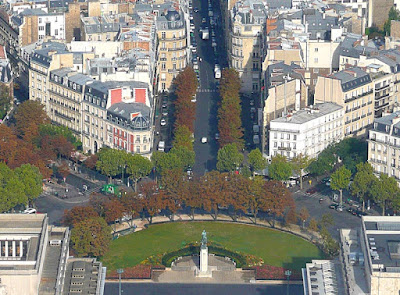 La Place du Trocadéro
The Eiffel Tower isn't very tall by today's standards. It was surpassed in 1930 as the world's tallest structure by the Chrysler Building in New York City. It tops out at 300 m (984 ft.). It was built for a world's fair in 1889, and if it hadn't become an important structure as a radio transmission tower in the early 1900s, it might well have been torn down back then. Many thought it was an eyesore when it was built (people felt the same way about the glass pyramid in the courtyard at the Louvre in the 1980s). 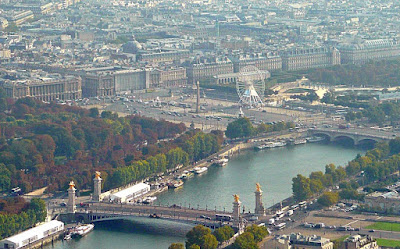 La Place de la Concorde and the Ferris wheel (la Grande Roue)
The number of people who visit the Eiffel Tower goes up steadily. I have a Michelin guide from 1976 that says the number back then was three million a year. A 1988 guide puts that number at more than four million, and the Cadogan guide to Paris from 1993 says it' was five million back then. Get there early in the day if you want to go up to the top. And wait for a very clear day if you can. 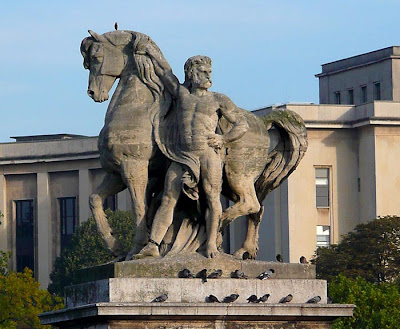 This must be Vercingétorix, the Gallic leader
who tried to stop the invading Romans 2,000 years ago