I won't be going to La Défense this weekend, but I will be going to Paris. I'm spending the night at the airport before flying out to Atlanta on Sunday. I'm looking forward to the trip, but I'm a nervous flyer. Traveling is stressful. 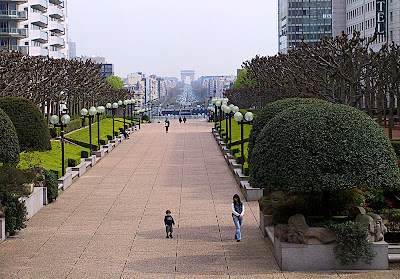 The view from La Défense
One way to go to the airport in Paris, of course is to drive. Actually, the airport is in the town of Roissy, north of Paris. It can take anywhere from three to five hours to get there by car from Saint-Aignan, depending on traffic around Paris. It also depends on whether you take the toll road or little local roads. When I went in mid-September to meet my sister, it took me about 3½ hours on the autoroute and the toll was about 15 euros ($20). Fuel for the car is a big expense too. 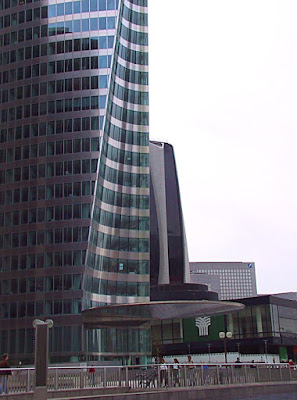 The EDF building at La Défense — EDF is
Electricité de France, the utility company
The other way to get to Roissy is by train. Again, there are two options. There are the local trains from Saint-Aignan, connecting either through Tours or Vierzon to lines that feed into the Paris Austerlitz station. Or there are TGV trains from Tours either to Paris Montparnasse or directly to Charles de Gaulle airport. 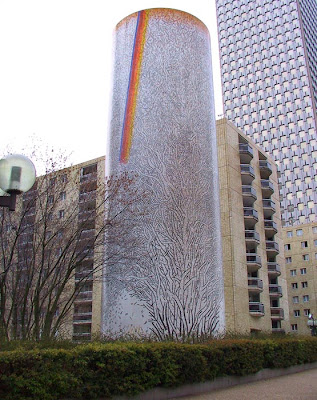 Another ventilation tower at La Défense
The price of the ride on the TGV is between 55 and 75 euros this Saturday morning, according to the railway system's web site. The regular train from Blois to Paris Austerlitz is 23.50 euros, and that's what I'm taking That means Walt has to drive me to Blois. There aren't any trains directly from Saint-Aignan to Paris that work with my schedule. If I left from Saint-Aignan, I'd have to leave early in the morning, arriving in Paris around noontime, and I don't want to do that. The train from Blois is at 1:40 p.m. and takes just under two hours. 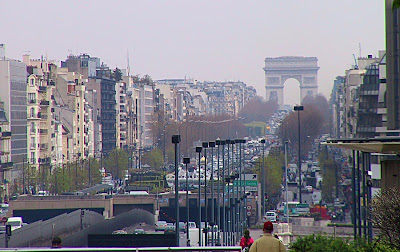 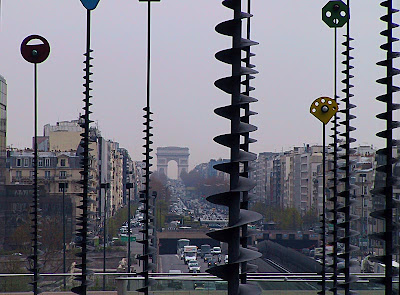 On last view, framed by artwork
The trip is complicated, but you just have to be very zen about it. Did I mention that once I get to Roissy I have to take a shuttle from the RER station to my hotel. And a shuttle back to the RER station or the airport terminals both Saturday night and Sunday morning. I will be spending 6 or 7 hours on public tranportation, and then 8 hours on an airplane.

* * * *
It was hard to blog this morning. The dog needed walking, and then the yard and garden needed attention. We raked some leaves, ate some weeds (as it were), and hauled a lot of trimmings to the compost pile. It's cold and gray here now; you'd think it was December. It's afternoon now. More tomorrow. It will all get done.
Posted by Ken Broadhurst at 13:26