Another gratin with potatoes

Instead of milk and cheese, you use broth and onions. Cut the potatoes into the same thin slices, and slice two or three onions. Make layers of potatoes and sliced onions in the oiled baking dish. Put a couple of bay leaves or some other herbs between the layers. Salt and pepper everything. Then barely cover the potatoes with hot broth: chicken, beef, or vegetable. 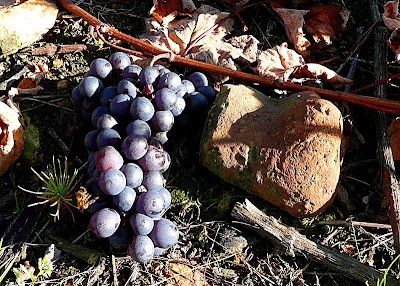 Fall scenes out in the vineyard
You can start it in the microwave or directly in the conventional oven. Let it cook for about an hour, lowering the heat as necessary so that it doesn't burn on the top but giving all the liquid a chance to evaporate. Actually, if there's a tiny bit left, tant mieux. The main thing is that the top layer needs to be golden brown. 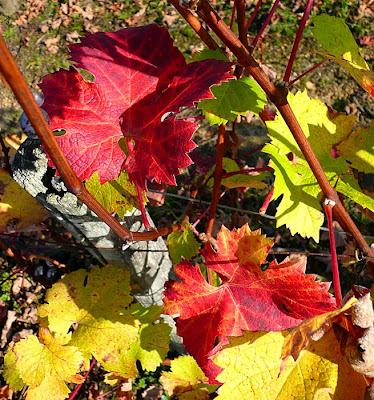 Fall colors
Boulangère means the baker's wife. Why are these potatoes named after her? Because people didn't have ovens in their homes, and they would take their lunch dishes to the bakery to have them cooked in the hot oven after the day's bread finished baking. Or the baker's wife would cook her food this way. A lot of villages also used to have a community oven, called un four banal, which people could use to cook their roasts, casseroles, cakes, and pies — usually for a fee. 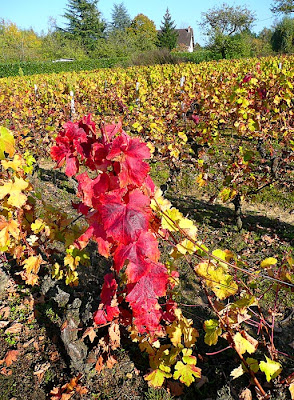 Wonder why these leaves are bright red,
while the others are yellow?
The weather here in Saint-Aignan is nice this week. It's fairly warm, sunny, and breezy. Good for drying the laundry on the clothesline outdoors, and good for doing gardening work. Walt is working on trimming the hedge around our yard, all 100 meters of it. I'm doing cleanup from all that clipping and starting to rip the plants out of the vegetable garden. It feels good.

In less than two weeks, I leave for my next trip to the U.S. I'll be spending three weeks in the Southeast, mostly in North Carolina. Hey, Miss Monet in San José, do you have any N.C. travel plans?
Posted by Ken Broadhurst at 08:09