After lunch, J, J, and I walked down the Boulevard des Italiens toward La Madeleine. We had a couple of errands to do in that neighborhood. Janice wanted to go look around in an optical shop called Lafont that she had seen on the web. Joanna wanted to find a parfumerie, a perfume shop, on the Rue Saint-Honoré. And there was that outlet store to see about.

One of my favorite view spots in Paris is the corner of the Boulevard des Italiens and the Rue Lafitte. When you're walking down the boulevard, you come to the Rue Lafitte and look left. This is what you see. 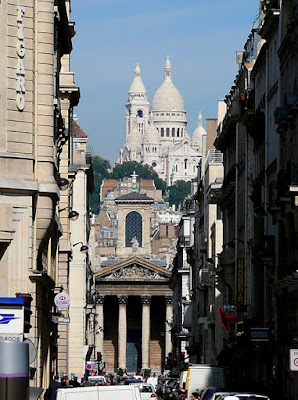 L'Eglise Notre Dame de Lorette
with Sacré Coeur floating above it
Since it's one of my favorite views, I'll put in a second picture, this one zoomed in a little more. I just looked in all my guidebooks — Michelin, Cadogan, Baedecker's, and Eyewitness — and none of them has an index entry for Notre Dame de Lorette. The church is in the 9th arrondissement, at the bottom of the Rue des Martyres, a famous market street (think Rue Montorgueil, Rue Mouffetard). A friend of mine lived up there many years ago. 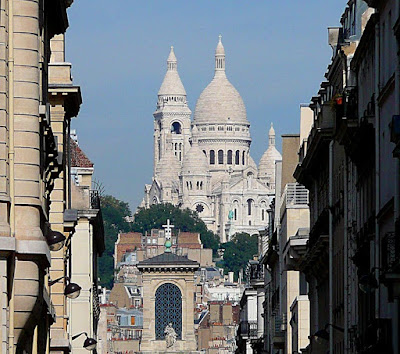 Sacré Coeur seen from the boulevards
We walked on, past café terraces full of people sitting out in the sun down, to the Place de l'Opéra. I looked up and noticed the statues on top of the opera house. It was a good chance to see if my camera could capture them. 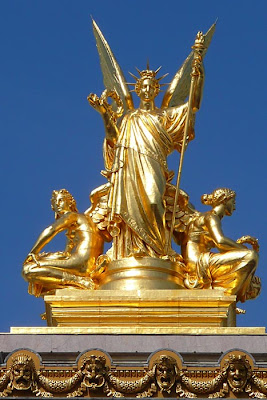 La Poésie, a sculpture by
Charles-Alphonse-Achille Gumery
The architect of the grand opera house, Charles Garnier, commissioned these sculptures in the 1860s and 1870s. The Opéra opened in 1875. Many of Paris's great buildings and monuments were put up in the 19th century. 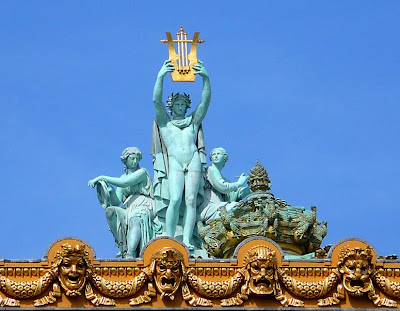 Apollon, la Poésie et la Musique,
a sculpture by Aimé Millet
We walked on down the Boulevard des Capucines toward La Madeleine and we stopped in the so-called outlet store we had seen earlier from the window of the 42 bus. It turned out to be sparsely stocked with highly over-priced merchandise (who's surprised?).
Posted by Ken Broadhurst at 08:00