France will be France...

In other words, the labor unions have announced a big strike for tomorrow, Oct. 18. This will be the first test of France's new president, Nicolas Sarkozy, on the labor relations front. Negotiations have been going on for weeks, but the strike is still on. For commuters and travelers, tomorrow could turn out to be a very trying day, especially in and around Paris. 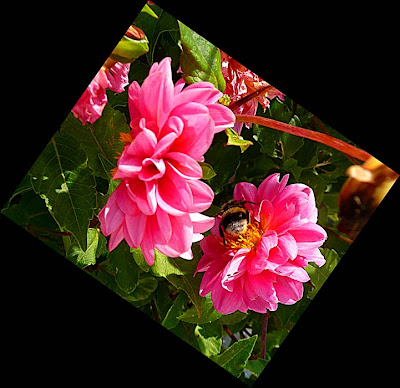 Fall dahlias at La Renaudière
For the first time since 1995, the eight labor unions that represent workers in the national train system (the SNCF) and the six unions that represent those in the Paris mass transit system (the RATP) support the strike tomorrow unanimously. The Minister of Transportation in Sarkozy's government has said there will probably be virtually no trains, metros, or buses running tomorrow. The strike will start tonight at 8:00 p.m. and end on Friday at 8:00 a.m. — unless it is extended. 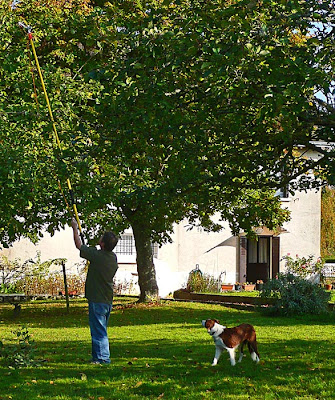 Autumn chores: pruning an apple tree
The SNCF is asking people who need to travel by train to do so today or wait until Friday evening. Even after the strike ends, it takes a few hours to get the whole system up and running again. Local trains, like the ones that stop at Saint-Aignan on their way from Tours to Vierzon, will be hard hit. Authorities are predicting that only 50 of the scheduled 800 TGV trains will run on Thursday. 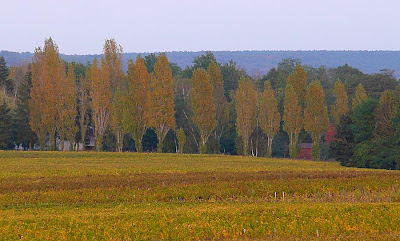 Fall colors in the vineyard
Why is the strike being called? It's because President Sarkozy wants to implement reforms in the transit workers' retirement pension system, including requiring workers to have put in 40 years of service to get full benefits rather than the 37½ years required today. Transit workers benefit from "special regimes" compared to other civil servants when it comes to retirement, and the government says it wants to get everybody on the same plan.

Meanwhile, there are likely to be sympathy strikes among teachers and utility and airport workers. One of the unspoken reasons the transit workers are calling this strike now is that another of the government's plans is to institute what is called a « service minimum » plan for strike days. In other words, unions will be required to keep a minimum number of trains, metros, and buses running even on strike days, so that people can get to work and otherwise move around the country. For some, such a plan goes against the whole right of workers to strike, making it impossible for them to express their displeasure effectively. But according to polls, 75% of the French think the service minimum is a good idea.

In Paris especially, and around the country, a lot of people who commute to work will just take the day off tomorrow. Others who can will walk to work, or drive — but there might be massive traffic jams, especially in the Paris region if too many people choose that option. The new "public bicycles" in Paris and other cities will probably be put to good use by people who need to move around the city faster than they could if they just walked. 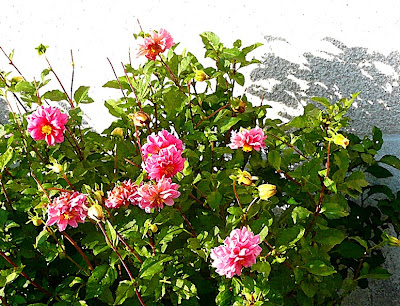 More dahlias, the last of the season
There might be a party atmosphere in parts of Paris, where workers will get together to demonstrate against the pension reforms, and especially if the weather is nice. There were big strikes, mostly among students, when Walt and I were in Paris in April 2006. They were protesting the government's new employment programs. I posted pictures and commentary here. It might give you an idea of the atmosphere. 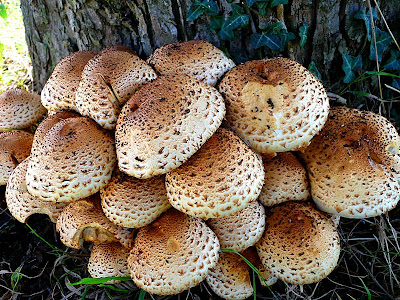 Autumn mushrooms growing big under an apple tree.
I looked them up and they don't appear to be edible.
Meanwhile, some in the press are saying that President Sarkozy's marriage is on the rocks. Already, during the election campaign last year, there was talk that they had split up. Then Cécilia Sarkozy came back and it seemed things were patched up. Recently, however, some thought she snubbed George and Laura Bush when the Sarkozys were on vacation in New Hampshire and they were invited to spend the day at Kennebunkport. He went, but she begged off. Now they are saying Cécilia has decided not to accompany President Sarkozy on an upcoming state visit to Morocco. Is she on the outs with her husband, or is she just trying to change the role traditionally played by French first ladies? Time will tell.
Posted by Ken Broadhurst at 08:47