The trip to Blois to pick up our resident's cards at the préfecture de police de Loir-et-Cher was fairly anticlimactic. The important moments came when we learned on September 3 that we would be given temporary resident's permits to extend the validity of our old cards, which were set to expire on September 10. We'd remain legal aliens, at least until December. The other important moment was when we received notification last Thursday that our cards were ready for pick-up.


Yesterday, we arrived at at the préfecture in Blois at about 9:15 — the drive took a little less than an hour. We easily found parking in one of the worst-designed parking lots I've ever seen. After after paying a couple of euros for a ticket that was good until 10:30, we walked across the lot to the building where French immigration agents process residence permit (carte de séjour) applications. There were a dozen or so people in line, waiting to see one of the two receptionists on duty.


The wait was short. But it had only started, because the receptionist who looked at our papers just gave us a ticket with a number on it and directed us to the waiting room. Walt got E815 and I got E816. We took a seat and joined a crowd of about 50 people waiting for their number to come up on one of the two big computer screens in the room. The number being displayed when we sat down was E806. We sat for 10 or 15 minutes before number E807 came up on the display. 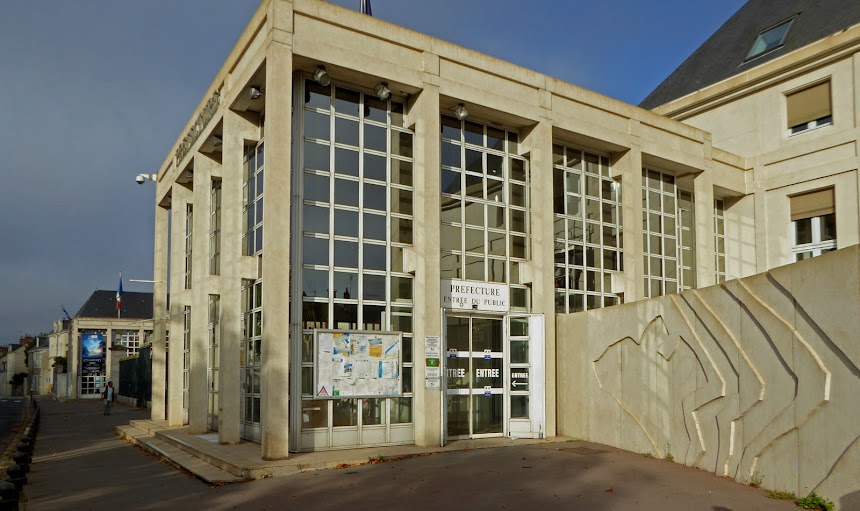 This is the entrance to the lobby of the préfecture's office for immigrants and legal aliens.


Walt did a quick calculation and figured that if each person called in spent 5 to 10 minutes with the immigration agent, he would be called at about 10:30. That meant our parking would expire and we might end up having to pay a fine for overstaying our welcome. So I went out and bought a second ticket, one that would be valid until 11:30. It only took a minute or two, and my number wasn't close to coming up on the screen any time soon.


Walt's calculation was exactly right. His number was called at 10:30. He walked a few steps down a hall to what was called Guichet 8 ("window" 8), which was not actually a window but a door into a very small room, just big enough for two chairs. A woman sat behind a desk with a computer and a stack of new or renewed cartes de séjours were ready to be handed out. Three minutes after Walt walked down the hall, he was back. It was done.


My number came up a minute or so later. I too went to Guichet 8 — a sign on the door said Asiles, meaning it was normally used for processing asylum-seekers, I guess. We had been told to bring our convocation (summons), passport, expired or expiring resident's card, the temporary card we had been issued earlier, and our paper proving we had paid 269 euro "tax stamp" that we had paid on line to cover the fee for the renewal. The immigration agent looked at the documents, shuffled through the many cards that were ready to hand out — mine was the next-to-last one in the pile — gave me my passport back, my new carte de résident,  and asked me to sign a paper attesting that I had received it. That was all there was to it.


I examined the card. On it I read CARTE DE RÉSIDENT PERMANENT. I asked the agent if that meant it never needed to be renewed again. I was surprised when she said she didn't know. She had to call her supervisor to get that information. An older woman came in and told me that the permanent card would expire in 10 years, just as the plain carte de résident would. So I don't know what in the world the word PERMANENT on my card actually means. I guess I'll find out in 10 years. Maybe the renewal process will be different. Walt got the plain carte de résident, so we'll both be renewing in 2029 and we'll see if the rules are different or not. 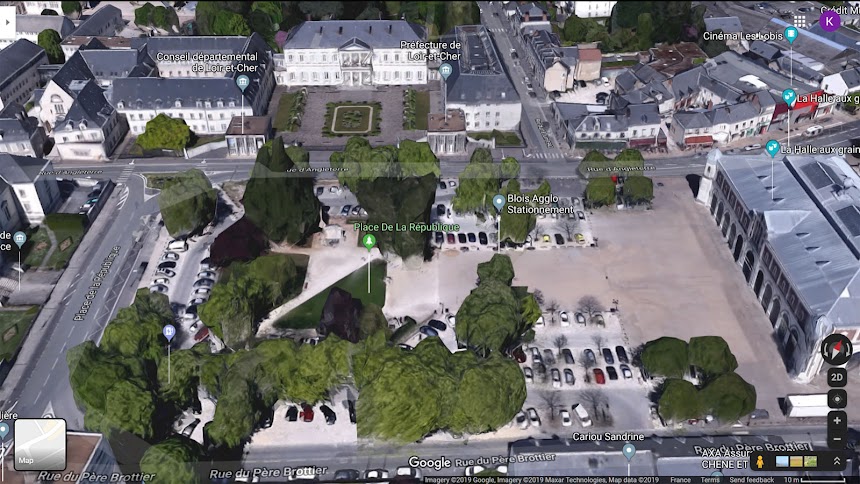 Thanks to Google maps for this image of the préfecture and its strange parking lot.


About that parking lot: you can see it in the picture above, along with the entrance (labeled as the Préfecture de Loir-et-Cher on the screenshot) for foreigners and people registering their cars or getting a driver's license. The parking lot has narrow curvy lanes with head-in parking all along them. Spaces are not marked, so in places two cars take up enough room for three cars. There are trees growing along the lanes as well, making maneuvering tricky. And some of the lanes are dead ends, with barely enough room to turn your car around  and get back out if you haven't found an empty space to park in.


In addition, instead of paying for the time you've left your car in the lot upon departure, upon arrival you have to estimate how much time to pay for. That's why I had to go back out and buy another ticket to extend our parking time — when we arrived, we had no idea how long we would need to be there. The town or préfecture must make a lot of extra money from people who have to overpay in order to avoid having to pay a fine.
Posted by Ken Broadhurst at 06:31