Read part 3 of this series here.

After we had made the decision to apply for renewal of our resident alien status — that's what it's called in the U.S., I think — instead of applying for French citizenship, and had scheduled our rendez-vous with the people at the préfecture in Blois, we had to carry through. We had, or thought "we" had, a morning appointment on September 3 to turn in our papers.
Just a couple of days before the rendez-vous date, it occurred to me that since Walt had actually scheduled the appointment, my name might not be on it. Well, I was right — it wasn't. In the past, back more than 10 years ago, the people a the préfecture, and also at the offices of the French Sécurité Sociale (which runs the national health insurance service) had always dealt with us as a couple, even though, legally, we weren't. After living together as a couple since 1983, we and people like us weren't allowed to get married until five or six years ago. It hadn't occurred to either of us that we would need separate appointments at the préfecture.
So when we got there and had waited in line for 10 minutes or so, we found out that that was exactly the case. The very officious, self-important woman who checked people in for their appointments looked at the printout of the rendez-vous confirmation, looked at us, and asked which one of us it was for. We said it was for both of us. We told her we were a married couple. That doesn't matter, she said — one appointment, one person. Whose name is this on the paper? Walt said it was his. The woman looked at me and said I would have to go back home and make an appointment in my own name before I could turn in my application and the supporting documents. Damn! Isn't it ironic that before we were legally married, we were treated as a couple, and now that we actually are married we are not? 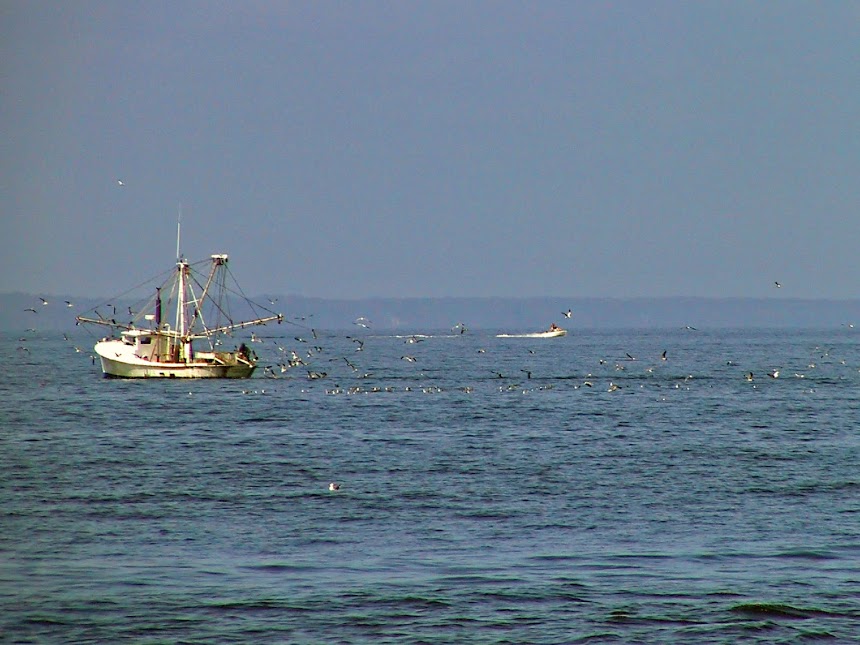 Here's a North Carolina postcard for today.
This was the woman who had told me on the phone back in June that I didn't really need a carte de résident. I recognized her voice and manner. Even without a card, or with an expired one, she said, I would still be able to move around freely in France. The problem is that over the past few years, at CDG airport as I was getting ready to fly out on a trip to the States, on at least one or maybe two occasions the agents who check passports had scanned my U.S. passport, looked up at me, and asked me to produce my French carte de résident. Luckily, I had it with me, and I showed it, and all went smoothly. I don't know what they would have done if I had said that I hadn't thought to bring it with me. Or if I showed them an expired card.
So there I was. The préfecture receptionist was really officious, almost obnoxious, but I have to say she was very complimentary to Walt about how well he spoke French. That's always a nice thing for people to say. He gave her the papers she said he needed. She checked them sort of superficially, paper-clipped them together, and handed them back to him. Go wait over there, she said, and you will be called by name in a few minutes. She looked at me, too, as she said it. So I asked her, can I go in with my conjoint (spouse)? To my surprise, she said she didn't see why not. We went and sat down in the waiting room.
Thinking back on it a day or two ago, one other surprising thing about the préfecture visit was that there was absolutely no security to go through as we entered. Nobody checking the contents of purses or briefcases. No metal detectors. Nothing. Anybody could just walk in off the street. These days, that's strange.
Before long Walt's name was called. We walked down a hallway and went through door number 6 into a sort of office space. The woman we were meeting with didn't seem surprised to see two of us. She asked which one of us she was processing, and then I told her my story. Yes, she said, each person needs a separate rendez-vous, and that's true even for married couples. You'd think they could specify that on their web site, but never mind. The woman looked through Walt's papers, clipping documents together, entering information into her computer, and cutting apart the ID photos we had taken in a supermarket photo booth. 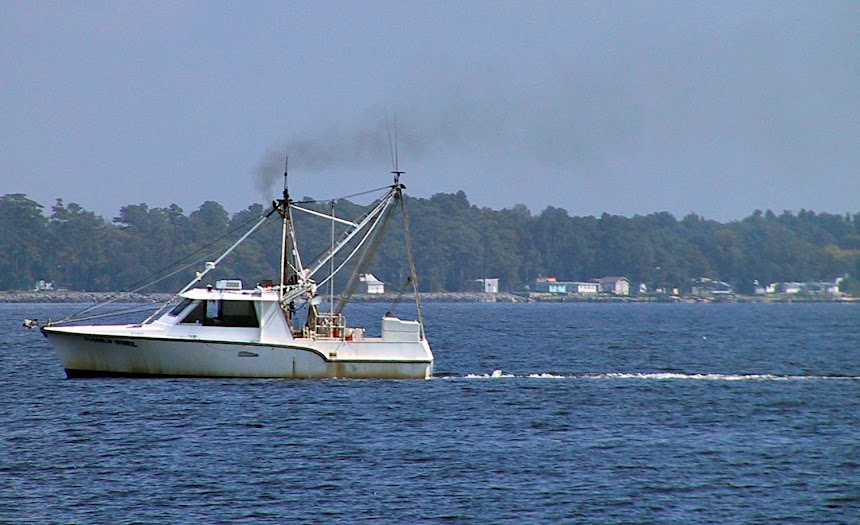 I hope N.C. waters are now back to looking like this, with the storm long gone.
After a minute or two, she looked up at us and said that the renewal application was very straightforward and it wouldn't take her long to process it, so she would go ahead and do mine as well. At one point, the gatekeeper/receptionist woman came into the office and told her colleague that she had explained to us that only one of us could be processed on that day, and that I would have to come back later. The woman processing the paperwork said, no, she was going to go ahead and process my application as well. It wouldn't take long. The receptionist mumbled something about that being okay if that was the best way to do things...
The other woman, who was friendly and efficient, looked at the paperwork and focused on the name of our village. She asked us where it was in relation to Blois — I guess she'd never heard of it. The receptionist who had popped in and told her it was pretty far from Blois, near Saint-Aignan — maybe a 40-minute drive. I interjected that we had allowed an hour and a half to make the trip, including time for finding a parking space near the préfecture and for preliminaries like standing in line. Oh, then I'll definitely process your application too, because that's a long drive. Now you know, and in 10 years when you come in for your next renewal, make sure that you schedule two separate appointments!
As she was entering data on the computer and clipping papers together, I mentioned that we had read somewhere that an applicant over the age of 60 or maybe 65 was supposed to be eligible for something called a carte de résident permanent. She said she would have to look up the requirements for that, and she did. Yes, she said. If you are over 60 — I'm 70, I told her — you are given a carte de résident permanent upon renewal of you first 10-year carte de résident. She said the "permanent" card would still carry an expiration date 10 years out, so I'm not sure what it all means, but I'll take it. The woman looked at Walt and asked him how old he was. Fifty-nine, he said. I added "and nine months!" Oh, too bad, the woman said, I guess you'll have to come back for another renewal in 10 years' time.
Then she pulled out a scanner and took a full set of our fingerprints to include in our files. Finally, she asked us to wait for a minute while she went and made us up temporary documents extending the expiration dates on our current resident's cards so that they would remain valid for three months longer. That's the récépissé I mentioned in an earlier post — the one the disagreeable receptionist had said they wouldn't be able to give us for a carte de résident. I wonder how that woman keeps her job, since she gives out so much bad information. I guess it's none of my business. 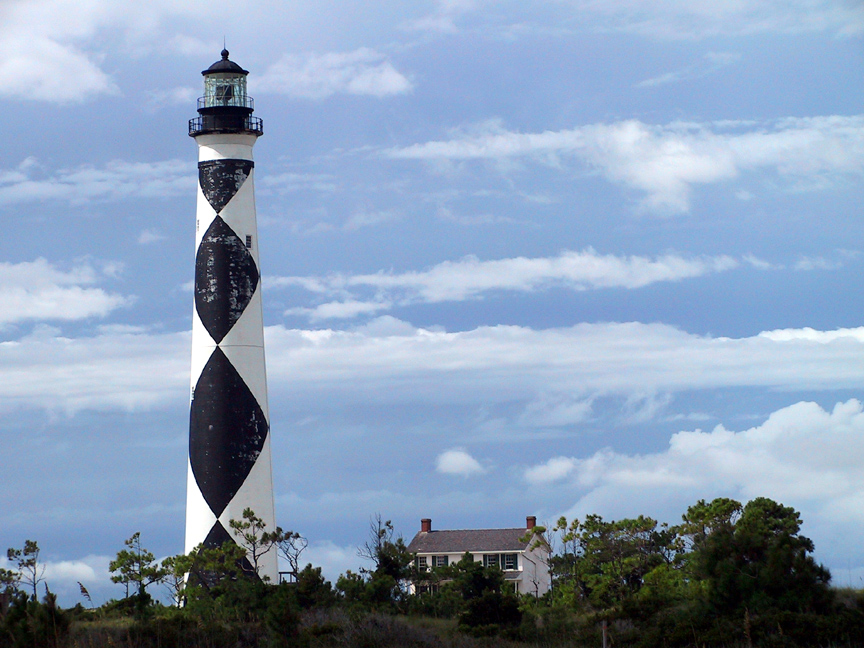 I can only assume that Cape Lookout lighthouse near Morehead City is still standing.
Not much more than 30 minutes after we had arrived, in spite of everything, we were out the door with our old resident's cards in hand, along with the récépissés that extend their validity. We were told our new cards should be ready for pick-up around the first week of October. I'm holding my breath, hoping there are no further snags.
The resident's card renewal appointment turned out to be as anti-climactic as Hurricane Dorian was around Morehead City in North Carolina. A lot of trees blew over in the 100 mph winds, there was some flooding, and there were extensive power outages, but there was little serious damage, as far as I can tell. On Ocracoke Island to the north, which is reachable only by air or boat and where about a thousand people live, the flooding was much worse. I guess more news will be reported about it all today. It's the middle of the night over there as I type this.
Posted by Ken Broadhurst at 07:00