Read part 1 of this series here.

I think some préfectures accept applications by mail. It turns out that ours doesn't. Everything has to be submitted in person, and you have to have appointment arranged in advance. That meant we would need to drive up to Blois (it takes about an hour) to turn in the application. If we didn't have all the documents we needed, the application would be rejected. We'd have to drive back home, do some more work, get another appointment, and drive back up to Blois again, so we needed to be thorough and careful.


Our residence cards were set to expire on September 10. That meant we were supposed to figure out in July what all the requirements were. Well, we started well before that, and in June (a month early) we decided to try to make an appointment for later in the summer. You have to make the appointment on-line, on the préfecture's web site. Walt looked up the page, and he quickly learned that the first available appointments were for September 3.


That seemed to me to be cutting it very close, because they don't just hand you a card while you're there at the préfecture for your appointment. It can take several weeks, if not a month or more for the application to be processed and the card to be printed and laminated. Only then do you get a notification by mail that you can go back to the préfecture in Blois and pick it up. I decided to pick up the phone and call the préfecture to see if there was any way to make an appointment earlier. I wasn't sure anyone would answer the phone... 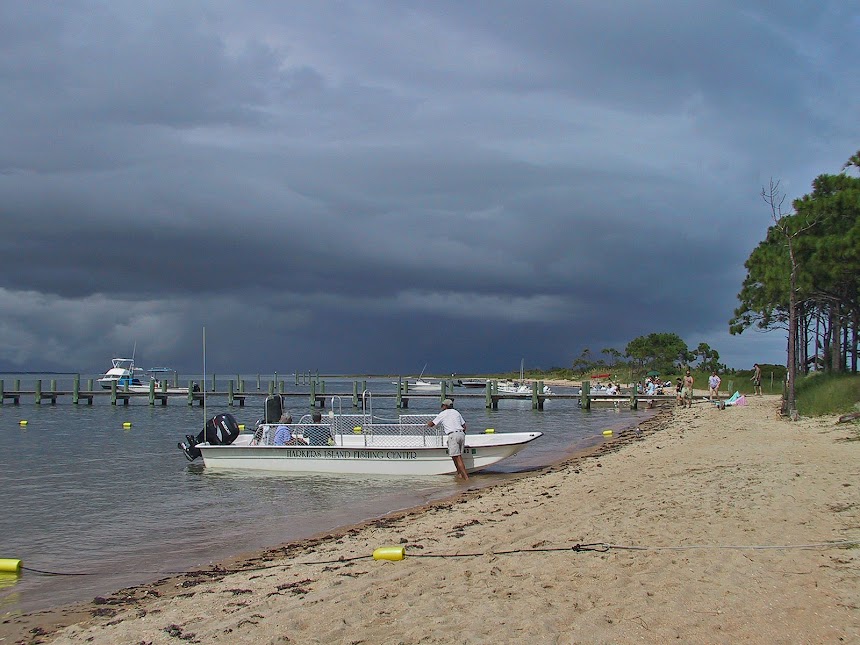 Here's today's North Carolina postcard. That skiff with the black outboard motor was the "ferry" we had taken over to Cape Lookout
on that day in 2002. It was only about a four-mile cruise. I was getting nervous about the weather, but all went well.

The woman who finally answered the phone was less than helpful. She said, basically, that she didn't understand why people (meaning, of course, foreigners) thought they could do everything at the last minute. That set the tone — Walt and I were actually starting the process a month early. We're busy up here at the préfecture, the woman said, and the next available appointments are in September.

I asked her if, when we turned in our papers on September 3 (assuming they wouldn't be rejected), we would be given a temporary card or some other document (it's called a récépissé) that would prove to anybody who wanted to see the residence card — which would have expired by then — that our application had been turned in and was being processed. We didn't want to be considered illegal.


No, the woman on the phone said, we don't give out anything like that. You're on your own, in other words. Then she said: Really, monsieur, you don't even need a residence card. You can move about freely in France without one — there's no problem. I couldn't believe she'd tell me that. I told her that the préfecture ought to revise its web site to tell applicants that they needed to set up an appointment not two months in advance but four or even six months. I can't do anything about that, she told me. Come in for your appointment on September 3. I thanked her coldly, but politely, and hung up.

What a strange and stressful summer it has been. First, there was the new bathroom, meaning chaos in the house and people in and out all the time. Then we had three separate heat waves, with temperatures outside up to 100ºF, sometimes higher, and up to 95 in the house. That was exhausting. Then I had a colonoscopy in July — that required four trips to Blois and back. Luckily, the result was good. But I've been stressed out for months, mentally and physically. Now, on top of all this, Hurricane Dorian is moving up the U.S. coast toward the place where my family and so many friends live...

Read part 3 of this series here.
Posted by Ken Broadhurst at 06:30